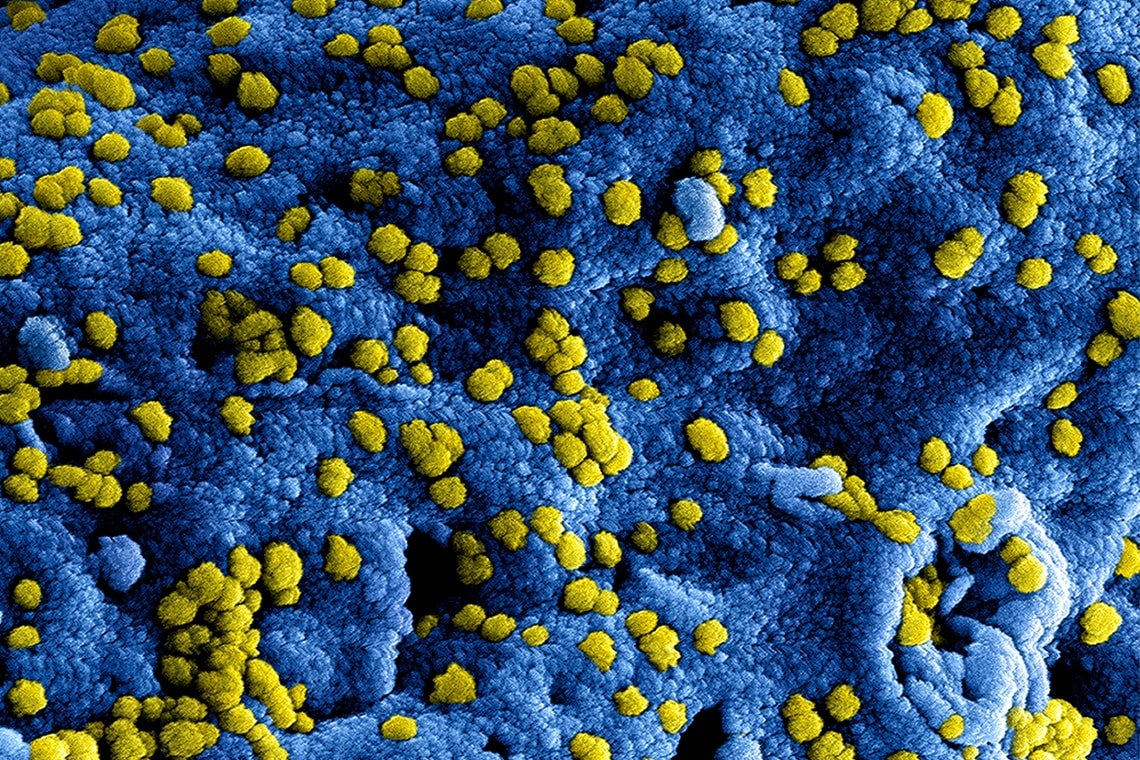 MERS particles attach to the surface of an infected human cell. The engineered protein can paralyze MERS by binding tightly to a key enzyme (image courtesy of the Donnelly Centre for Cellular and Biomolecular Research)

Could lead to anti-viral therapeutics for both humans and animals

In 2012, a 60-year-old man with flu-like symptoms died in Saudi Arabia, becoming the first victim of the Middle East Respiratory Syndrome or MERS.

Until now, there has been no vaccine or known treatment. That could change thanks to a new anti-viral tool, developed by University of Toronto researchers.

Scientists have crafted a custom-engineered protein that can be used to treat MERS and a wide range of pathogens, a potential game-changer in anti-viral therapeutics for both humans and the farming industry.

Writing in the journal PLOS Pathogens, a team led by Professor Sachdev Sidhu of the Donnelly Centre for Cellular and Biomolecular Research and department of molecular genetics, describes how to turn ubiquitin, a staple protein in every cell, into a drug capable of thwarting MERS in cultured human cells.

“Vaccines are important for prevention, but there is a great need for anti-viral medicines to treat people who have become infected,” says Wei Zhang, a postdoctoral researcher in Sidhu’s lab who did most of the work on the study.

“With our tool, we can quickly generate anti-viral medicine, and we hope that our method will inspire other researchers to try it out against diverse pathogens,” says Zhang.

MERS is similar to SARS, the virus that killed almost 800 people in a global epidemic. Both kill upwards of a third of people infected and, like many viruses, emerged from animals – bats and camels in the case of MERS. Although MERS has so far been detected in 27 countries, the outbreak has largely been contained within Saudi Arabia, according to the World Health Organization.

Like many viruses, MERS works by hijacking the ubiquitin system in human cells composed of hundreds of proteins that rely on ubiquitin to keep the cells alive and well. Upon infection, viral enzymes alter ubiquitin pathways in a way that allows the virus to evade the immune defense while multiplying and destroying the host tissue as it spreads in the body.

“Viruses have evolved proteins that allow them to hijack host proteins. We can now devise strategies to prevent this from happening,” says Zhang.

Zhang and colleagues engineered the human ubiquitin protein into a new form that paralyzes a key MERS enzyme, stopping the virus from replicating. These synthetic ubiquitin variants act quickly, completely eliminating MERS from cells in a dish within 24 hours.

The researchers also created UbVs that block the Crimean-Congo virus, the cause of a hemorrhagic fever that kills about 40 per cent of those infected.

And they’re designed to only target only the virus – hopefully minimizing side effects in any future drug.

But before these engineered proteins can be developed into medicine, researchers first must find a way to deliver them into the right part of the body. For this, Zhang and Sidhu are working with Roman Melnyk, an assistant professor at U of T and a biochemist at the Hospital for Sick Children and a world expert in protein delivery.

The team is also investigating the possibility of finding drugs that work in a similar manner but can cross the cell membrane.

It is likely that the proteins will be tested first in plants and animals where regulatory approvals are less strict than they are for human drugs.

“We are also working on an engineered ubiquitin that targets a corn virus responsible for destroying large swaths of corn fields in North America, with colleagues in Manitoba,” says Zhang.

The study was done in collaboration with Marjolein Kikkert of Leiden University Medical Centre in the Netherlands and Brian Mark at the University of Manitoba.