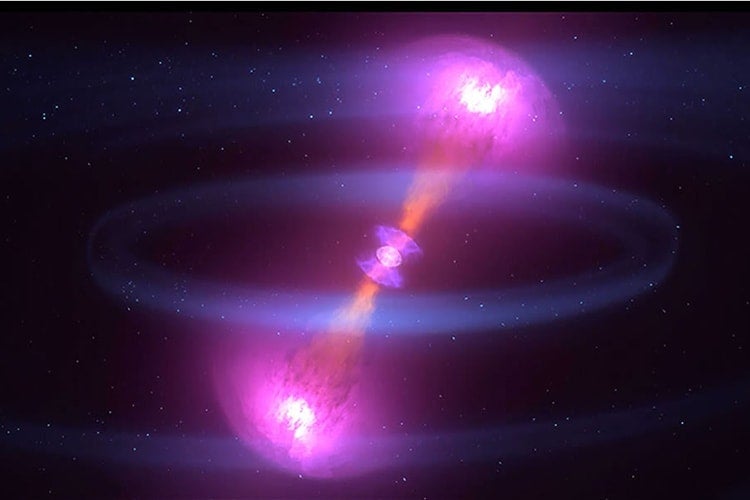 While the first four detections by LIGO involved gravitational waves produced by collisions of massive black holes, the latest waves were produced by the collision of two much smaller neutron stars (image by NASA's Goddard Space Flight Center/CI Lab)

Scientists at the University of Toronto today joined their 1,200-plus colleagues at the Laser Interferometer Gravitational-Wave Observatory (LIGO) in celebrating a new detection of gravitational waves – a cosmic phenomenon predicted by Albert Einstein a century ago.

This latest detection – the fifth – is different, though. While the first four detections involved gravitational waves produced by collisions of massive black holes, the latest waves were produced by the collision of two much smaller neutron stars.  Also novel to this discovery is that it marks only the second detection by a third observatory, the Virgo detector located in Pisa, Italy. Virgo’s involvement proved crucial in better estimating where the event happened in the sky.

The first detection of gravitational waves by LIGO observatories, announced in 2016, occurred in the U.S. states of Louisiana and Washington. Three scientists who founded and led the LIGO project were awarded the Nobel Prize in physics for the discovery only two weeks ago.

On Aug. 17, gravitational waves resulting from the crash of two neutron stars arrived on Earth in the form of a signal observed by the LIGO and Virgo detectors for about 100 seconds. “The long duration of the signal tells us that the bodies that collided to create it had smaller masses compared to previous events involving black holes, whose signals each lasted for only a fraction of a second,” said Aaron Zimmerman, a senior research associate at the Canadian Institute of Theoretical Astrophysics (CITA) in the Faculty of Arts & Science at U of T, site of the only Canadian team in the LIGO collaboration dedicated to analyzing the observational data.

“The signal length indicates that the objects had masses slightly greater than our own sun and densities greater than in a nucleus of an atom,” said CITA postdoctoral fellow Carl-Johan Haster, who was part of an effort to quickly estimate the parameters of the neutron stars in a matter of days or weeks rather than the months it would have taken with earlier techniques. “The colliding objects were likely neutron stars.”

Corroborating evidence that the waves were caused by a pair of neutron stars was provided by the separate and near-simultaneous observation of a burst of gamma rays less than two seconds later.

Based on what is known to date, a collision of black holes is not expected to emit light or any signal other than gravitational waves, while the violent collision of two neutron stars is expected to also emit many forms of electromagnetic waves, from high-energy gamma rays to visible light, and even radio waves.  Further, neutron stars are made up of exotic, super-dense matter.

“This marks the first cosmic event observed via both gravitational waves and light,” said Zimmerman, who along with his CITA colleagues helped lead the analysis to determine the properties of the colliding neutron stars, including the masses and spins leading up to the collision.

Astronomers have for decades observed intense flashes known as gamma ray bursts, and though uncertainty about the origins of the shortest and most energetic bursts has prevailed, it has been widely believed they emerge from the collision of neutron stars with other neutron stars or black holes. This latest discovery involving gravitational waves confirms the origins of such bursts of light in the merger of neutron stars.

“With both gravitational waves and electromagnetic waves emerging from the same astrophysical origin, it’s a fantastic example of what’s come to be known as multi-messenger astronomy,” said Katerina Chatziioannou, also a postdoctoral fellow and member of the team at CITA.

Once the gravitational waves were detected, scientists at the LIGO and Virgo collaboration alerted their network of observing partners as to what they had seen and roughly where in the sky they thought the event had occurred.

“A vast international campaign began, where dozens of teams of astronomers used almost every major telescope on Earth and in orbit around it to observe this event, making new discoveries across the whole electromagnetic spectrum,” said Harald Pfeiffer, associate professor and Canada Research Chair in Gravitational Wave Astrophysics and Numerical Relativity at CITA, and fellow in the Gravity & the Extreme Universe research program at the Canadian Institute for Advanced Research (CIFAR).

Pfeiffer leads the U of T team – which also includes department of physics PhD candidates Heather Fong and Trevor Vincent, and past postdoctoral fellow Prayush Kumar – that has been largely responsible for performing simulations of black hole-collisions on high-performance supercomputers, and producing the gravitational waveforms – the shapes of the signals – that the LIGO detectors search for. They were joined on this particular detection by fellow U of T researcher Maria Drout, a Carnegie-Dunlap fellow at the Dunlap Institute for Astronomy and Astrophysics. Drout is also a member of the California-based Observatories of the Carnegie Institution for Science that was among the global network of partners immediately solicited to observe the event visually.

The event is proving to be rich in details and new insights about neutron stars, and the super-dense material of which they're made.  For example, it is theorized that binary neutron star collisions like the one just observed throw out material that eventually decays radioactively to form gold and other heavy elements. The detailed analyses of the joined data-sets of gravitational waves and electro-magnetic observers may very well shed new light on this hypothesis.

“Astronomers will be learning from this event for years to come,” said Pfeiffer.

LIGO is funded by the NSF, and operated by Caltech and MIT, which conceived of LIGO and led the Initial and Advanced LIGO projects. Financial support for the Advanced LIGO project was led by the NSF with Germany (Max Planck Society), the U.K. (Science and Technology Facilities Council) and Australia (Australian Research Council) making significant commitments and contributions to the project. More than 1,200 scientists and some 100 institutions from around the world participate in the effort through the LIGO Scientific Collaboration, which includes the GEO Collaboration and the Australian collaboration OzGrav. Additional partners are listed at http://ligo.org/partners.php

The Virgo collaboration consists of more than 280 physicists and engineers belonging to 20 different European research groups: six from Centre National de la Recherche Scientifique (CNRS) in France; eight from the Istituto Nazionale di Fisica Nucleare (INFN) in Italy; two in the Netherlands with Nikhef; the MTA Wigner RCP in Hungary; the POLGRAW group in Poland; Spain with the University of Valencia; and the European Gravitational Observatory, EGO, the laboratory hosting the Virgo detector near Pisa in Italy, funded by CNRS, INFN, and Nikhef.

With files from LIGO