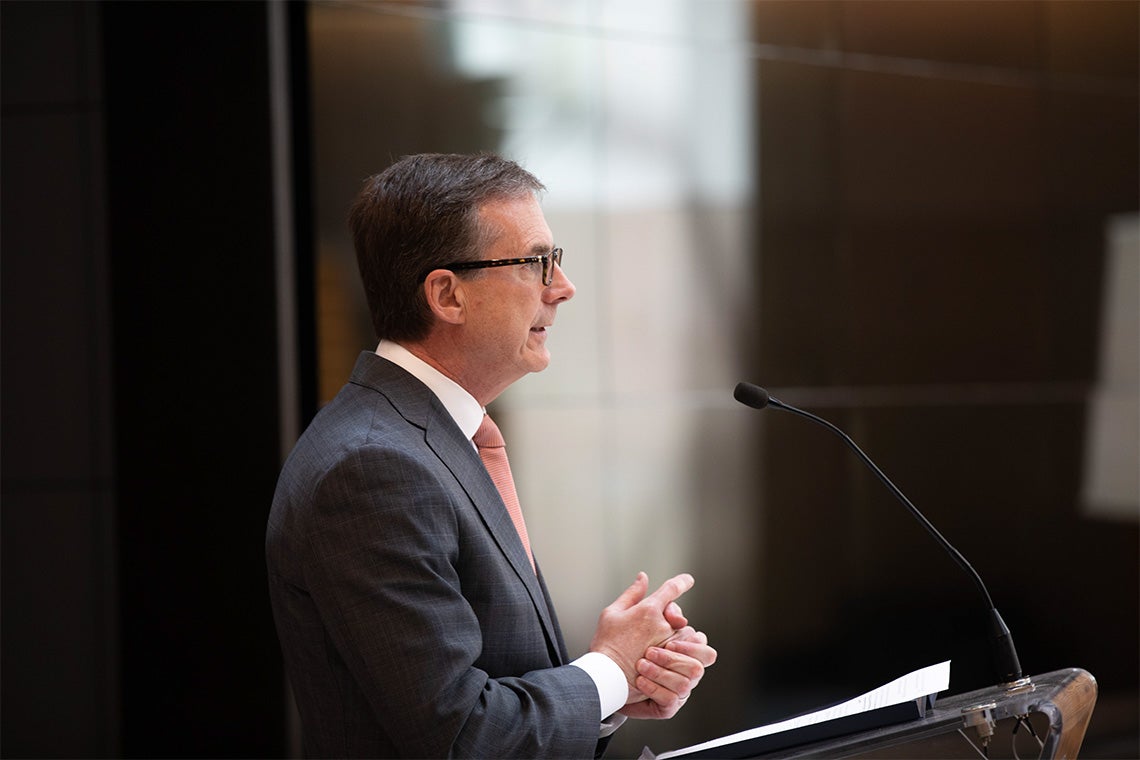 Tiff Macklem, dean of U of T’s Rotman School of Management, chaired an expert panel on sustainable finance that made 15 recommendations about the transition to a "climate-smart" economy (photo by Lisa Lightbourn)

As the world increasingly feels the effects of climate change, the financial sector has a vital role to play in the transition to a smarter and more sustainable economy.

That’s one of the key messages of a final report by an expert panel on sustainable finance led by Tiff Macklem, dean of the University of Toronto’s Rotman School of Management.

Macklem, a former senior deputy governor of the Bank of Canada, was joined by Finance Minister Bill Morneau at U of T last week and fellow panel members Barbara Zvan, of the Ontario Teachers’ Pension Plan, and Andy Chisholm, of RBC Financial Group, for a round-table discussion on the report’s findings. The report, commissioned by the federal government, lays out 15 recommendations that aim to find common ground between Canada’s environmental sustainability goals and economic ambitions, as well as incentivize market activities and consumer behaviours to aid the transition to a “climate-smart” economy.

“We know that in Canada, because we’re an energy-producing country, we need to think about how we can continue to be efficient in that part of the economy but drive down carbon emissions, while not actually impacting people that are struggling with the cost of living,” Morneau said in remarks before the panel discussion.

“What I’m so delighted about this morning is that we’re having the opportunity to get the benefit of advice from the panel, the work that’s being done, and to talk about how we can get through this in the business sector.” 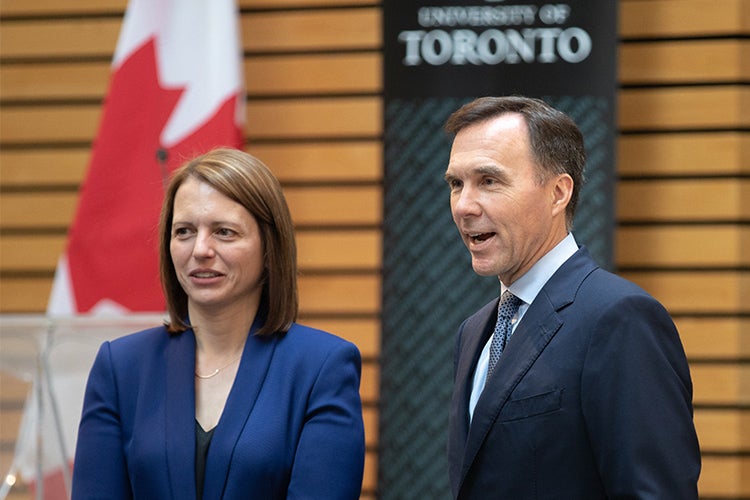 Macklem kicked off the discussion, moderated by BNN Bloomberg anchor Amanda Lang, by highlighting the need for finance companies and organizations to take part in collaborative – rather than isolated – efforts toward a cleaner economy.

Zvan, the chief risk and strategy officer at the Ontario Teachers’ Pension Plan, honed in on the third recommendation from the report, which calls for the government to establish a sustainable finance action council to take advantage of the expertise of the private sector in formulating sustainability-related policy and regulations.

“It’s really key – the connection between the private industry and government. We saw in all our interviews so much energy, really what was lacking was the scale,” said Zvan, who serves as chair of the board of directors of the Rotman-affiliated International Centre for Pension Management.

“If we can bring these two groups together… bring the right leaders, right investment, right government individuals – you can get a lot done.”

Chisholm, a director of RBC’s board, said it was time for the finance industry to take a glass-half-full approach towards the challenge of transitioning to a sustainable future.

“Let’s accept this as a reality and embrace it and turn this adversity on its head into a competitive advantage,” he said.

To that end, Macklem used the example of climate-related financial disclosures, which aim to integrate information pertinent to climate change into financial reporting.

“On that notion of turning things on their head – rather than resisting disclosure, we should be embracing it as a means of telling our story, showing our targets and then proving that we’re hitting them,” he said.

Chisholm added that Canada should first look to establish itself as a leader in environmentally and socially responsible finance, “and then get the rest of the international community to come along because we’re proving that this is something that can be done.”

Zvan warned that Canada can’t afford to be complacent as that could leave it trailing behind other countries in the transition to an environmentally friendly economy.

“If you go the U.K. and Europe, most people are aware of the enormity of the efforts that are going on there. But don’t underestimate – there’s a lot of effort in China, Hong Kong and other countries that will shape how our industries will be sought out and looked at,” Zvan said.

At the end of the talk, the experts took questions from the floor. A Rotman student asked about the importance of education in driving the shift towards a greener finance landscape.

“Education is a big part of this,” Macklem responded. “It starts at the university level but we’ve also got to develop programs for executive training, for boards of directors. We have a number of recommendations for [educational programs] for accountants, lawyers and consultants.”

As Macklem noted, the report recommends that the government set up funding initiatives to help financial associations create educational programs to promote understanding and action on the financial risks and opportunities related to climate change and sustainability.