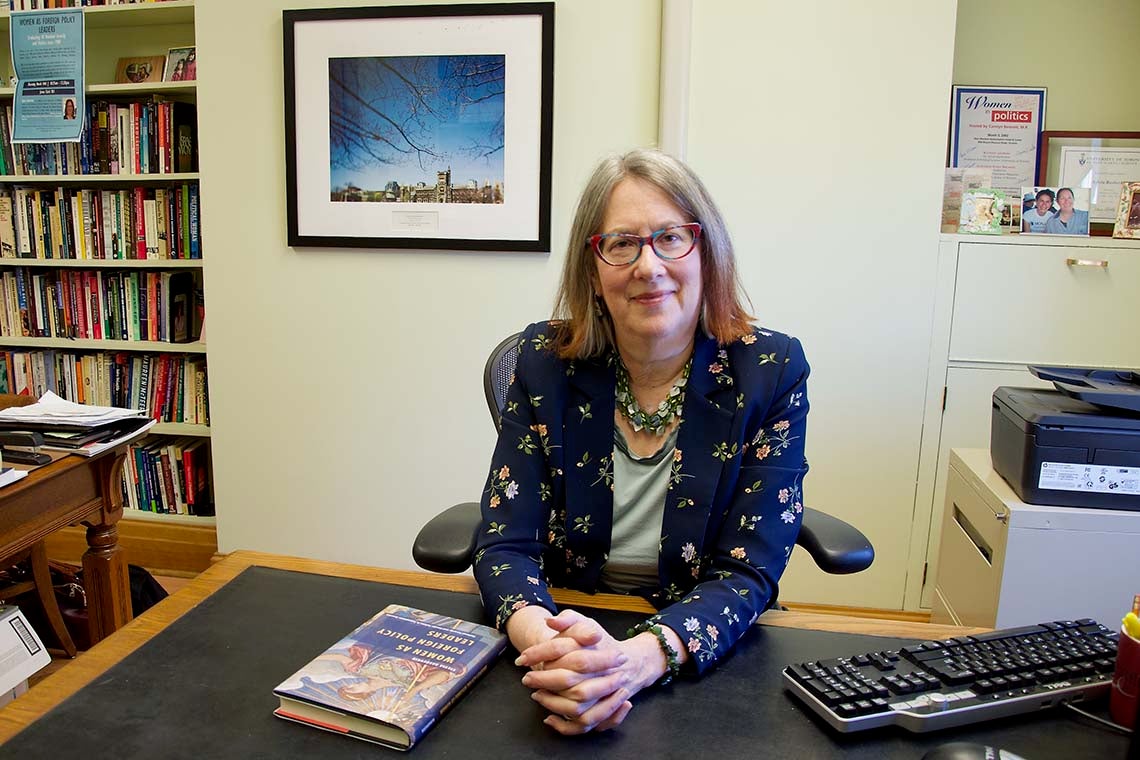 “I think a lot of the research we undertake that really compels us is driven by curiosity,” says Sylvia Bashevkin, a professor of political science, about her book 'Women as Foreign Policy Leaders' (photo by Diana Tyszko)

If you open a newspaper, turn on the evening news or log on to any social media platform, you’ll be hard pressed to find a news organization that doesn’t have something to say about a woman in a position of political power.

But they haven’t always been recognized for their contributions by the public, journalists or scholars – something that piqued the curiosity of one University of Toronto researcher.

“The U.S. produced four really interesting women leaders since the 1980s,” said Sylvia Bashevkin, a professor of political science in U of T's Faculty of Arts & Science, citing a dearth of research on them. “So I thought, let’s see how we can till this untilled field.”

“What drew me was curiosity about what they had accomplished and what limitations they confronted,” said Bashevkin, highlighting the gaps in existing coverage of these women’s careers and lives. “I think a lot of the research we undertake that really compels us is driven by curiosity.”

And while comparing four leaders who seem to be vastly different might seem daunting, Bashevkin was ready to take on the challenge.

“Because I had done a lot of comparative work before I did this study, I had a sense that there were some continuities and important parallels,” said Bashevkin. “It wasn’t as unmanageable as it appeared.”

Bashevkin, who recently won the International Studies Association’s 2019 Bertha Lutz Prize for conducting the highest quality public writing and research on women in diplomacy for Women as Foreign Policy Leaders, explores the ways in which these leaders shaped U.S. foreign policy, while also debunking key assumptions about what it means to be a woman in a position of power.

This includes the myths that foreign policy leaders who are women are likely to be less aggressive when it comes to international relations and are guided by feminist ideals above all else.

“I’m still fascinated by all four of the women I studied and am still full of curiosity about the ones who have come after them – both in the U.S. and elsewhere,” said Bashevkin.

And these days, exploring the role of women in politics seems more pressing than ever before, particularly to those outside the academic realm.

“There isn’t a week in my year that goes by without my working with community groups, the media or universities outside U of T,” said Bashevkin.

Whether it’s speaking at an International Women’s Day event at the British Consulate in Toronto, moderating panel discussions with esteemed women leaders, being interviewed for podcasts or talking to young leaders at events organized by groups like Equal Voice and Samara Canada, Bashevkin has seen an increase in public interest surrounding women in politics.

“I started working in this field as a graduate student in the 1970s when there was almost no interest in it whatsoever, or it was really episodic,” said Bashevkin. “But there’s a lot of public interest now. It isn’t just in the classroom; lots of people are curious about what’s going on.”