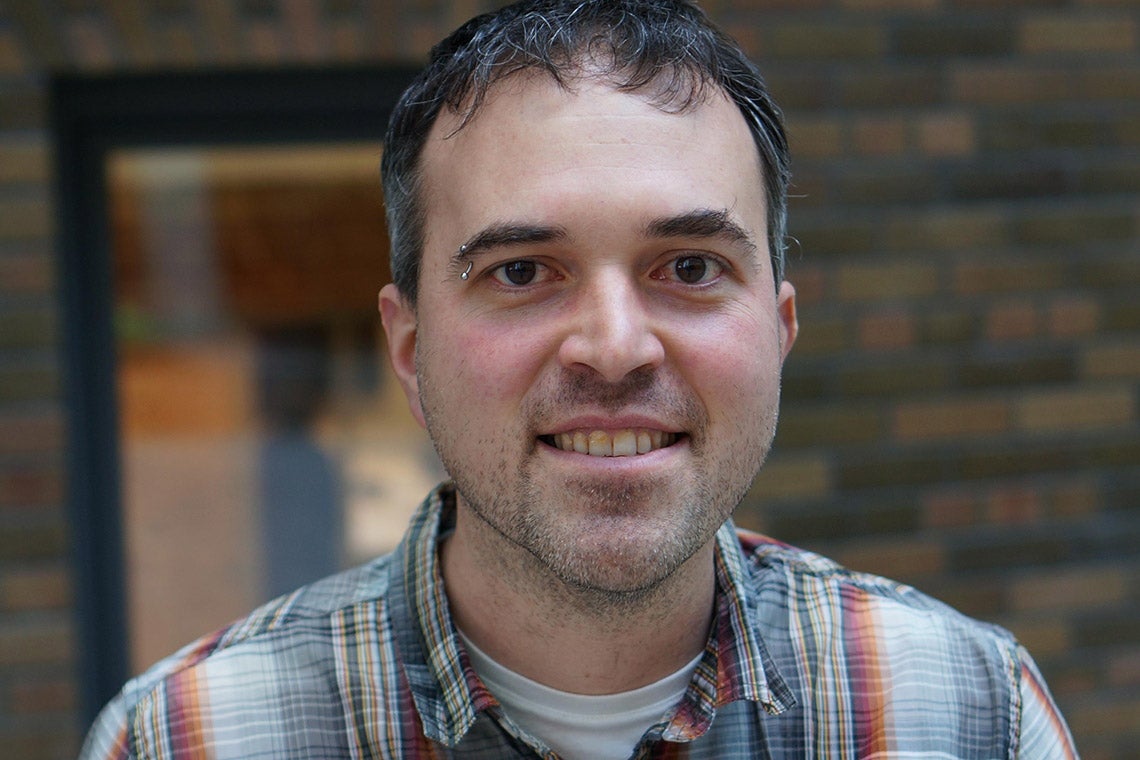 Microsporidia are one-cell parasites that can cause stomach pain, weight loss and eye inflammation, among other symptoms. They can be fatal in people with weakened immune systems, including the malnourished and those with AIDS. They also infect insects — and Aaron Reinke studies that process in worms to better understand how these parasites make people and animals sick.

Reinke is an assistant professor of molecular genetics at the University of Toronto's Faculty of Medicine, where he set up a laboratory in 2017 after postdoctoral studies at the University of California, San Diego (USCD). He was recently U of T’s sole recipient of an Alfred P. Sloan Foundation fellowship, a prestigious early-career award that comes with a US$70,000 prize.

Reinke spoke with writer Jim Oldfield about how microsporidia infect worms, why we should care about these parasites, and how immunity to disease-causing agents can be inherited.

Tell us about your research.

Broadly, we’re interested in how parasites interact with their hosts, to understand how pathogens evolve. We study microsporidia in particular, a unicellular organism that is related to fungi and extremely common. It can cause disease and death in humans, and in animals it has figured out how to infect just about every species. It affects livestock and aquiculture production, and it’s been implicated in the collapse of honeybee colonies, so there are practical reasons to understand these parasites as well. And although there are thousands of species, we don’t know much about them, since they only live inside host cells and have been very hard to study.

So how do you overcome those challenges?

Well, we now have genome sequences for about two dozen species of microsporidia, which aids genomic studies. And these parasites have very small genomes, roughly 2,000 genes, which makes it easy to sequence more of them. As well, we now have a system that has let us identify a set of proteins expressed by microsporidia genomes. This system, which I developed as a postdoc in the lab of Emily Troemel at UCSD, lets us see the proteins these parasites put into host cells. With biochemical techniques we can label those new proteins and then study their different properties and effects in the host cell. We also have a great host for studying this interaction – C. elegans, a worm that is a powerful experimental model because it shares a lot of biology with humans.

What have you found in C. elegans?

We’re now able to look at multiple wild strains of C. elegans, which allows us to see how the worms have evolved resistance to infection. We are experimenting with pools of worm strains and we have genomic ways of reading out which strains do better or worse under infection with different microsporidia. We have identified strains of C. elegans that are resistant and susceptible to different species of microsporidia, and we’re starting to identify the genes responsible for the phenotypes we observe.

You’re also studying inherited immunity. Can you tell us about that?

Researchers are increasingly seeing environmental effects that impact the next generation in both people and other animals. There have been many studies on how immunity is passed along between generations, including in invertebrates such as mollusks, bees and butterflies. But we don’t know how this works, and it’s hard to study in these organisms due to lack of tools and long generation times.

The advantage with worms is that we can go through a generation in three days and use genetics to identify the genes involved, so they are an amazing model. We can infect animals and isolate their progeny, and we see the progeny are more resistant to infections. We are now characterizing this response and identifying how immunity is transferred. Understanding this process will provide insight on how this happens in other animals, and it may help us understand other types of inherited environmental effects, which are potentially conserved in humans.

I grew up in Montana, so I’d been to Canada before and I’ve found living here great. Toronto is an excellent environment to do science, and I’ve found that U of T’s department of molecular genetics gives new investigators time to develop a research program before asking too much in terms of teaching and committee work. So I’ve been writing a lot of grants and recruiting lab members. We’re at a nice size now, with three grad students, two postdocs and two technicians.