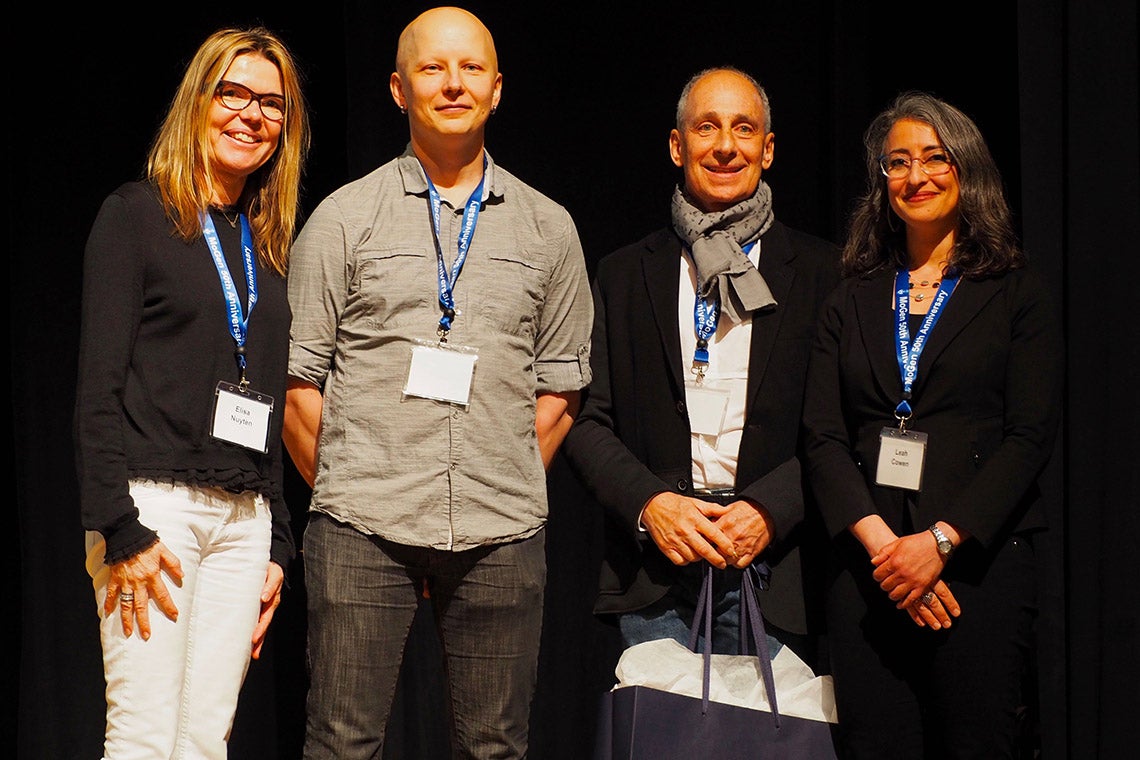 Assistant Professor Mikko Taipale (second from left) stands between Elisa Nuyten and David Dime. Leah Cowen, chair of the department of molecular genetics, is at right (photo by Tim Westwood)

High-risk research can bring high rewards, but for early-career researchers seeking tenure and funding renewal it often makes more sense to stick with projects that are safe and guaranteed to yield data. Mikko Taipale is lucky in that he can do both.

Taipale, an assistant professor at the University of Toronto's Donnelly Centre for Cellular and Biomolecular Research and in the Faculty of Medicine's department of molecular genetics, is the inaugural recipient of the David Dime and Elisa Nuyten Catalyst Award in Molecular Genetics. The award was established by David Dime, a U of T alumnus, to support exploratory research projects that are not obvious candidates for government funding.

“It’s a huge honour to receive this award,” said Taipale, who holds the Canada Research Chair in Functional Proteomics and Proteostasis and is an Azrieli Global Scholar at CIFAR. “It is amazing that David decided to give this money away to [the departmet of molecular genetics] – he could have spent it otherwise, but he decided to support research.

“It’s truly humbling for my lab to be the recipient of his generous gift.”

Taipale received the award at a recent symposium celebrating the department’s 50th anniversary. Professor Leah Cowen, chair of the department, thanked Dime and his wife Elisa Nuyten for their gift, calling it “incredibly important and of tremendous value to the department’s effort to support innovation and discovery.”

Learn more about Dime and Nuyten's gift to U of T

Since joining the Donnelly Centre in 2014, Taipale has established a research program that seeks to uncover how cells regulate abundance of gene-encoded protein molecules. Because having too much or too little of a given protein can lead to disease, researchers are increasingly looking for ways to manipulate protein levels for therapy.

Dime graduated and obtained his PhD in chemistry from U of T. In the early 1980s, while working as a research associate at the department of medical genetics, as the department of molecular genetics was then known, Dime realized that his colleagues doing biomedical research lacked a dedicated supply of chemistry reagents for their experiments. With support from U of T, Dime launched his company, Toronto Research Chemicals, which has grown into a successful business employing 300 people and supplying the biomedical research community worldwide.

Dime’s motivation to establish the Catalyst Fund was driven not only by a desire to give back to U of T but also by a true passion for science.

“I love science,” he said at the symposium. “I think that science is really going to save this world and it gives me real pleasure to be able to support scientific research.”

U of T’s department of molecular genetics was founded in 1969 by University Professor Emeritus Louis “Lou” Siminovitch, who recognized early on the potential of genetic and molecular biology research in modern medicine. Siminovitch, who is 99 years old, attended the symposium along with other former department chairs, including James Friesen and Brenda Andrews, co-founder and director of the Donnelly Centre, respectively.