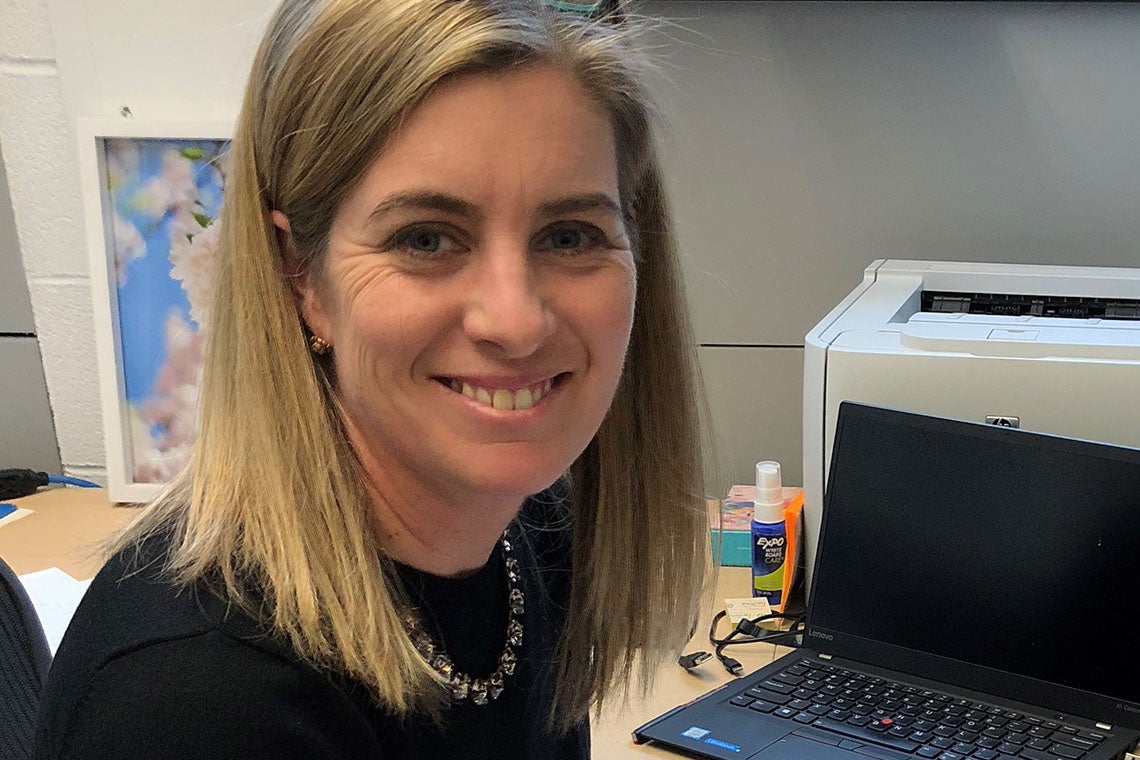 Melanie Woodin, a professor in the department of cell and systems biology, is one of five recipients of 2018 New Ideas Awards from Medicine by Design

For the 3,000 Canadians living with amyotrophic lateral sclerosis (ALS), there is no effective treatment or cure. The neurodegenerative disease, also known as Lou Gehrig’s disease, destroys brain cells that control voluntary muscle movement, leading to paralysis and killing 80 per cent of patients within two to five years of diagnosis.

“It’s really like getting a death sentence,” said Melanie Woodin, a professor in the department of cell and systems biology at the University of Toronto who studies the biology of the brain.

Thanks to a 2018 New Ideas Award from U of T’s Medicine by Design initiative, Woodin is pursuing research that could eventually help delay or even prevent the onset of these devastating symptoms. Central to her strategy is repurposing chemogenetics – a tool scientists already use to study normal brain function – to target and regulate the activity of affected brain cells, creating the neurological equivalent of a remote control.

Woodin is one of five researchers at U of T and its affiliated hospitals who are receiving 2018 New Ideas Awards as part of Medicine by Design’s strategy to accelerate regenerative medicine discoveries and turn them into new therapies. The awards, which are each worth $100,000 per year for up to two years, support innovative, early-stage research that has the potential to make a significant impact on regenerative medicine research and translation. Other funded projects are investigating new approaches to treat skeletal muscle injuries, stroke and Duchenne muscular dystrophy and improve the success of blood stem cell transplants.

“Through these New Ideas Awards, Medicine by Design is sowing the seeds of new discoveries and catalyzing innovation,” said University Professor Michael Sefton, executive director of Medicine by Design and a faculty member at the Institute of Biomaterials & Biomedical Engineering and the department of chemical engineering and applied chemistry. “These projects are high-risk, but they also have the potential to advance regenerative medicine in significant ways.”

In Woodin’s case, the innovation lies in applying an existing tool in a novel way to new insights into electrical activity in the brain in ALS.

Electrical activity in the brain is the result of a balance between excitation and inhibition of neurons, like the accelerator and brake in your car. Links between electrical imbalances in the brain and conditions such as epilepsy, autism, schizophrenia and Alzheimer’s disease are well established, and evidence is emerging they may also be at play in ALS. Recent research has found that people who carry a protein mutation for ALS have hyperactivity in an area of the brain called the primary motor cortex, even before they show symptoms of the disease. Studies have shown that excitability promotes the degeneration of the neurons in ALS patients, leading Woodin to theorize that dampening it could delay the onset of the disease.

Woodin plans to explore her theory by harnessing chemogenetics, which allows scientists to modify proteins that occur naturally in the brain to respond only to specific molecules outside the brain – such as a drug – so they can control when the proteins are active. Using an animal model, Woodin will inject an engineered protein directly into the motor cortex via a virus. The brain will integrate the protein because it recognizes it as something it already makes, said Woodin. She will then activate it by administering a small dose of clozapine, a drug that has long been approved to treat certain psychiatric disorders, with the goal of reducing excitability and restoring the brain’s electrical balance.

“Success looks like, at a minimum, delayed progression of the motor symptoms,” said Woodin, who is collaborating on the project with Janice Robertson, a professor at U of T’s department of laboratory medicine and pathobiology and a researcher at the Tanz Centre for Research in Neurodegenerative Diseases. “Ultimately, we want to increase not only motor performance, but also survival.”

Woodin has already shown that coming at the problem from the other direction — by ramping up the brain’s inhibitory functions, or applying the brakes — can help restore electrical balance and hold off muscle weakness and paralysis in mice with ALS.

If Woodin’s new strategy to directly lower excitability in the motor cortex works in mice, the next hurdle will be finding a less invasive way to deliver the engineered proteins in preparation for clinical trials in humans. One possibility may be to inject the protein-laden virus into the blood stream and then use magnetic resonance imaging (MRI)-guided focused ultrasound to allow it to cross the blood-brain barrier, a tool pioneered at Sunnybrook Health Sciences Centre.

Medicine by Design is already funding a 2017 New Ideas project led by Carol Schuurmans at Sunnybrook Research Institute that is exploring whether this novel tool can be used to treat retinal disease. The 2018 New Ideas Awards are also supporting research into another possible application of ultrasound in regenerative medicine. Dr. Jane Batt (pictured left), a respirologist at St. Michael’s Hospital, a scientist at the hospital’s Keenan Research Centre for Biomedical Science and an associate professor in the department of medicine at U of T is investigating whether ultrasound-mediated gene delivery can help skeletal muscle repair itself after traumatic injuries that result in peripheral nerve damage.

She is collaborating with Dr. Howard Leong-Poi, head of the division of cardiology and a clinician scientist at the Keenan Research Centre at St. Michael’s Hospital, and an associate professor in the department of medicine at U of T.

Other 2018 New Ideas Award winners are:

Maryam Faiz, an assistant professor in the division of anatomy in U of T’s department of surgery. Her New Ideas project will examine whether astrocytes – one of the most abundant cells in the central nervous system – can be reprogrammed to replace lost cells following stroke and ultimately restore cognitive function. She is collaborating with Cindi Morshead, a professor and chair of the division of anatomy.
Paul Santerre, a professor at the Institute of Biomaterials & Biomedical Engineering and the Faculty of Dentistry. He is developing nanoparticles to deliver genome-editing machinery to skeletal muscle cells, potentially opening up a new way to treat Duchenne muscular dystrophy. Santerre is collaborating with Dr. Ronald Cohn, pediatrician-in-chief at the Hospital for Sick Children (SickKids) and a professor in the department of pediatrics at U of T, and Anthony Gramolini, a professor in the department of physiology.

Dr. Donna Wall is a section head of the Blood & Marrow Transplant/Cell Therapy program and a senior associate scientist in developmental and stem cell biology at SickKids, and a professor in the departments of pediatrics and immunology at U of T. Wall’s project will look at the impact of inflammation on the success of blood stem cell transplants, and whether patients experiencing inflammation due to infection or other immune responses need to undergo different preparation to reduce the risk of rejection. Wall’s collaborators are John Dick, a senior scientist at the Princess Margaret Cancer Centre at University Health Network and a professor in the department of molecular genetics at U of T; and Dr. Rebecca Marsh, clinical director of the Primary Immune Deficiency Program at Cincinnati Children’s Hospital Medical Center.

Medicine by Design also supports 19 collaborative team projects that are accelerating regenerative medicine discoveries in a variety of disease areas, including heart failure, diabetes, and neural diseases. Building on decades of made-in-Toronto discoveries, Medicine by Design is developing new peaks of excellence and strengthening Canada as a global leader in regenerative medicine thanks to a $114-million investment from the federal government’s Canada First Research Excellence Fund.