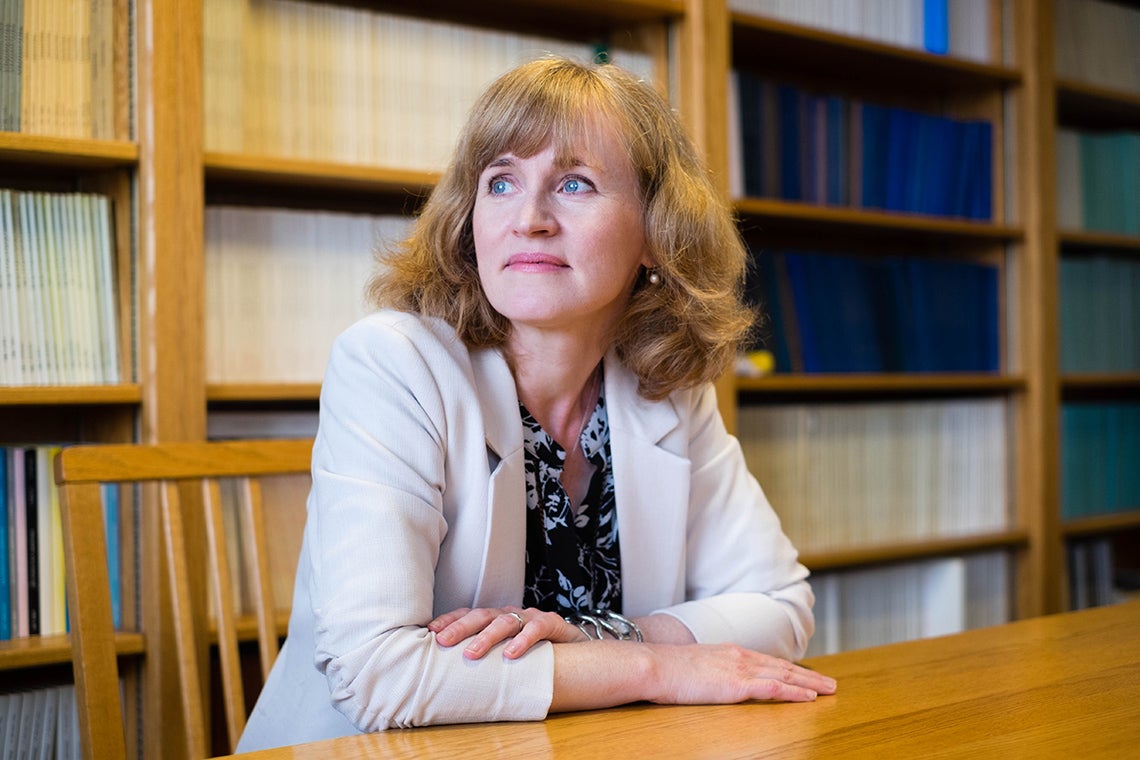 Jennifer Nagel, who will be promoted to full professor on July 1, is the new president of the American Philosophical Association's central division (photo by Geoffrey Vendeville)

The University of Toronto's Jennifer Nagel is taking a leadership role with the American Philosophical Association, becoming the next president of the group’s central division.

Nagel takes the helm on July 1. The associate professor in U of T's department of philosophy will also be promoted to professor on that day.

“Participation in the APA is one of our most direct ways to shape the character of the philosophy profession,” says Nagel.

She says she is looking forward to carrying through on the association’s new initiatives, including a general-interest philosophy blog and a teaching resource website.

Nagel, who is a specialist in epistemology, the branch of philosophy concerned with knowledge and related concepts like belief and truth, also plans to serve as an advocate for public philosophy. She has partnered with an organization called Wi Phi: Wireless Philosophy to create a series of short, animated videos that make complex philosophical concepts relevant, accessible and entertaining.

“The advocacy work is increasingly important in a climate of great pressure on the humanities,” she says.

She is also the author of Knowledge: A Very Short Introduction, part of a series on a range of subjects by Oxford University Press.

“It is both wonderful and important that top scholars in their field, such as Jennifer, take up senior leadership and advocacy positions,” says Martin Pickavé, chair of the department of philosophy. “Philosophy is a vibrant discipline and has never been as relevant as now. Philosophers such as Jennifer will help us to raise our public profile.”

In fact, the department of philosophy’s status has grown in recent international rankings, including the 2018 QS World University Rankings by Subject, in which it was ranked 13th, up five spots.

As well, the graduate department of philosophy was ranked fifth for public universities and 10th overall in Wiley-Blackwell's Philosophical Gourmet Report, the prestigious guide to graduate philosophy programs in the English-speaking world.

Nagel, who is currently vice-president of the APA, will succeed Charles Mills as president. Mills, a U of T alumnus, is a renowned political philosopher of critical race theory who completed his PhD here in 1985 and is now distinguished professor of philosophy at The Graduate Center of the City University of New York.

Mills grew up in Jamaica in the late 1960s during years of intense political struggle, an era of rising Anglo-Caribbean political radicalism. “It was in that context that I started looking for a subject that could provide a ‘big picture’ overview of what was going on,” he says.

When he came to Toronto to pursue graduate studies in the late 1970s, he became immersed in progressive Caribbean politics within Toronto’s large Anglo-Caribbean population – a dynamic community that thrives to this day.

Mills’s evolution in philosophy certainly wasn’t easy. He recalls struggling “with a discipline I found very white, very resistant to what I wanted it to do.”

And those struggles, while improved, still exist. He encourages philosophers of all kinds to educate themselves about the growing body of work on topics like race, ethnicity, and post-coloniality, and to incorporate these themes into their regular philosophy courses, rather than simply relegating them to courses on critical race theory.

“We need an expansion of the canon that recognizes the multicultural-multiracial nature of humanity and its correspondingly multifaceted perspectives on what it is to be human.”

Nagel says Mills's contributions to philosophy are invaluable. “A lesser scholar,” she says, “might have despaired and lost interest in philosophy” in the face of the discipline’s obliviousness to the type of critical race theory Mills wanted to pursue. But he paid attention to this obliviousness, “and later in his career crafted a terrifically insightful philosophical theory of it. He found a barrier and converted it into a topic, making the oversights of existing political philosophy into something that a new kind of political philosophy could be built to tackle.”

Nagel is not the only one in the department of philosophy to take a leadership role in the APA. PhD student Emma McClure was recently appointed to the APA’s Graduate Student Council for a two-year term. McClure is also president of U of T's Graduate Philosophy Students’ Union.