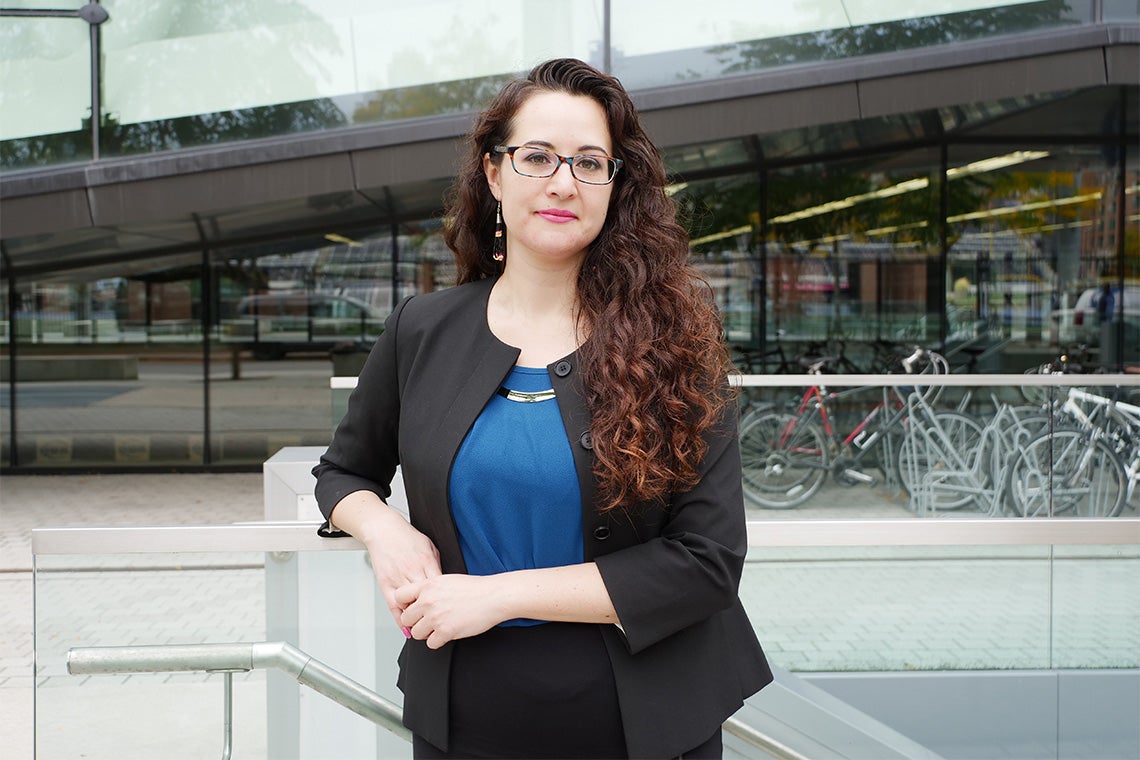 Canada will observe the National Day for Truth and Reconciliation on Thursday, a new federal statutory holiday to honour residential school survivors, their families and communities.

The day, which U of T will mark by flying its flags at half-mast on all three campuses, coincides with Orange Shirt Day, which recognizes the history and legacy of residential schools that was inspired by the story of Phyllis (Jack) Webstad from the Stswecem’c Xgat’tem First Nation whose orange shirt was taken away at the St. Joseph’s Residential School in Williams Lake, B.C.

An online Hart House event marking the National Day for Truth and Reconciliation and Orange Shirt Day will feature a video on Webstad. The event’s keynote speaker is Lee Maracle, a sessional lecturer in Indigenous studies, author and member of the Sto:Loh Nation.

Other events taking place at U of T that day include a virtual presentation of the Dalla Lana School of Public Health’s plans to create an Indigenous garden on McCaul Street followed by an in-person honouring ceremony outside the Health Sciences Building with speaker Elder Clayton Shirt.

Jennifer Brant, an assistant professor in the department of curriculum, teaching and learning at the University of Toronto’s Ontario Institute for Studies in Education (OISE), says it’s important for Canadians to reflect on the truth component of Truth and Reconciliation and do their own work to understand the urgent need for reconciliation.

This involves learning about Canada’s role in the genocide of Indigenous Peoples and the history of colonialism in this country, she says. While Sept. 30 marks the first National Day for Truth and Reconciliation, engagement with reconciliation must be a continual and daily process, she adds.

Brant, who teaches courses on Indigenous literatures, says one way to engage in reconciliation is to read. But not all history books on the subject are accurate, warns Brant, who belongs to the Kanien’kehá:ka (Mohawk Nation) with family ties to Six Nations of the Grand River Territory and Tyendinaga Mohawk Territory.

U of T News spoke with Brant about how Canadians can mark Sept. 30, where they should turn to learn more about the ongoing impact of residential schools on survivors and their communities and the progress (or lack thereof) the country is making toward reconciliation.

How should Canadians mark Sept. 30?

It's really important for Canadians to understand what truth and reconciliation is all about and to focus on the truth component. The final reports of the Truth and Reconciliation Commission of Canada were released nearly six years ago, yet the past several months have been described as a national reckoning. Canadians have had years to read the final reports of the TRC and to find ways to engage with the Calls to Action. Becoming aware of Canada’s history of colonization and the ongoing intergenerational legacy is a starting point. As the Calls to Action remind us, the need for truth and reconciliation in this country is urgent.

We witnessed reverberating shock across Canada following the findings of unmarked graves [at residential schools] despite an entire section of the final report of the TRC dedicated to awareness of unmarked graves across Canada. This is not something that was new to Indigenous Peoples. We've been talking about this for years. And so, an extension of the trauma this summer was witnessing the shock of Canadians and being asked to educate and comfort them about this. For Indigenous Peoples, this has also been a time of collective grief and mourning amidst heightened media requests. It has been quite exhausting.

You’ve pointed out that textbooks are often inaccurate in their descriptions of residential schools. What are some more reliable resources?

In my last interview with U of T News, I strongly urged all Canadians to read Tanya Talaga's Seven Fallen Feathers.

Pamela Toulouse released a book called Truth and Reconciliation in Canadian Schools, and it includes lesson plans as well as a list of books that teachers can bring into their classrooms. Sweetgrass Basket, They Called me Number One and Indian Horse are other books that I strongly recommend.

I also work with a lot of memoirs. One that stands out, and that I assign in my courses today, is titled The Education of Augie Merasty: A Residential School Memoir, a powerful story about a fisherman, trapper and storyteller who wanted the story about the years he endured in residential school from 1935 to 1944 to be told. Merasty, a survivor of the St. Therese Residential School located in Sturgeon Landing, Sask. was in his early 70s when he reached out to David Carpenter, a former professor at the University of Saskatchewan. The memoir documents Carpenter’s 10-year journey collecting the story of Augie Merasty. This story is a must read that exposes the legacy of residential schools and intergenerational trauma.

In terms of films, I have been really pushing this older film, from 1989, called Where the Spirit Lives and some community-based documentaries. There's one called Our Sisters in Spirit that was produced by Nick Printup that highlighted the issue of racialized, sexualized violence across Canada. This film was part of the push for the nationalpublic inquiry into missing and murdered Indigenous women, girls, trans and two-spirit peoples.

Do any history books come to mind?

How should parents discuss colonialism with their children, including residential schools?

There are tons of stories and books written for the primary and junior audience as well as some for adolescents. Some picture books offer age-appropriate insights into the history of residential schools and help to start a conversation that should continue over years.

I think it’s really important to be teaching this topic by centering Indigenous voices and bringing those literatures into the classroom, and inviting guest speakers, because the story needs to be told by Indigenous Peoples. Educators and parents must engage in their own work and be cautious of the additional labour that tends to get placed on Indigenous Peoples.

It’s important for educators and parents to reflect on what their role is in reconciliation. How can one even begin teaching about reconciliation if they’ve never taken the time to familiarize themselves with the TRC’s 94 Calls to Action? The educational archives of the National Centre for Truth and Reconciliation website offer an important starting place.

I struggle with the question that gets asked about age-appropriate ways to teach about residential schools and how to do it without traumatizing students. If we think about the difficult histories that students learn about in school – the conflicts and genocides in other countries – it becomes apparent that there seems to be a lot of resistance to learning about residential school history. Indeed, there has been significant pushback to using the word “genocide” to describe this system. We must remember it was a system intentionally designed to “kill the Indian in the child.” As a nation, Canada can no longer ignore this.

Resistance tends to stem from the very fact that Canada’s treatment of Indigenous Peoples challenges the narrative of Canada being a fair, equitable and peacekeeping country. I think it’s hard for Canadians to be confronted with a troubling history that has been ignored for so long and to grapple with the notion that Canada was built on the genocide of Indigenous Peoples.

Residential schools is not the sort of topic that you bring up once in Grade 1 or 2 and leave there – it should be an ongoing conversation. Children may learn about it in age-appropriate ways in the primary years and, in Grade 5 or 6, learn a little bit more. Children in primary school might not be learning about the sexual abuse that occurred in these schools, but might engage in introductory conversations about residential schools. As author and public speaker David Robertson wrote, parents must be prepared to talk about “identity, assimilation, and colonialism” and use language that is appropriate for their age level.

What are some Indigenous-led organizations that people might consider supporting on Sept. 30 and beyond?

There’s certainly the Indian Residential School Survivors’ Society, but more locally to the University of Toronto there’s the Mohawk Institute Residential School, otherwise known as “the Mush Hole,” which is now the Woodland Cultural Centre.

They have the Save the Evidence campaign to ensure that the evidence and restoration of the residential school there is complete, and have already been using that space for educational tours. But there’s more restoration that needs to be done.

Where do you think we, as a country, stand on reconciliation as we mark this first federal holiday?

I would say that progress is really slow, and I think the lack of movement toward reconciliation across the nation has been strikingly demonstrated for the past two years. We had land claim disputes and land protectors from Wet'suwet'en Territory on the west coast all the way to the Miꞌkmaq Territories on the east coast.

Prime Minister Justin Trudeau failed to follow through on his promises to provide clean drinking water in First Nations communities. That's only one of the multiple examples of our lack of movement toward reconciliation as a nation.

Alongside all of that, we still have Canada in court fighting against Dr. Cindy Blackstock’s initiative to bring Canada to the Human Rights Tribunal for discrimination against Indigenous children across Canada.

And even though the Truth and Reconciliation Commission has gotten some attention, we’re not hearing anything about the final report of the National Inquiry into Missing and Murdered Indigenous Women and Girls and its 231 calls to justice. Racialized and sexualized violence is another pressing and ongoing travesty that is deeply intertwined with Canada’s genocidal history.

So, we’re talking about reconciliation across the nation and it seems to be something that Canada is really committed to. But when we look at all these other realities that are ongoing, reconciliation appears to be quite superficial.

Reconciliation must involve engaging in difficult conversations, addressing the Calls to Action and not merely be about engaging in superficial acts for one day. I hope this first National Day for Truth and Reconciliation becomes a day for many Canadians to reflect and find ways to engage in an ongoing and meaningful journey of reconciliation. For some this involves starting with the calls to action, and for others it involves reading and learning about that truth component as a starting point toward reconciliation.