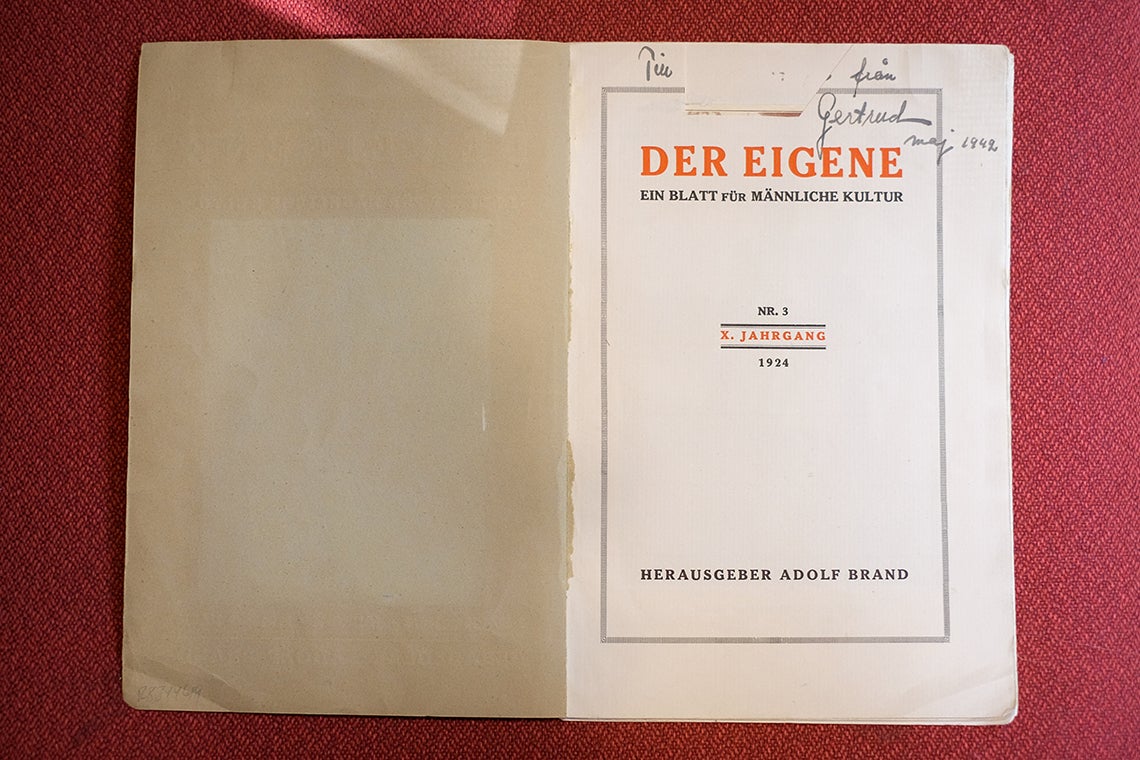 A 1924 copy of Der Eigene, said to be the world's first gay magazine, was recently added to Fisher's collection. A segment of the inscription is missing where a recipient's name might have been (photo by Geoffrey Vendeville)

One of the opening pages of a 1924 edition of Der Eigene, said to be the world’s first gay magazine, is missing a piece. The carefully cut-out segment, a few centimetres across, removes the text of an inscription – likely the recipient’s name – that was pencilled in by someone named “Gertrud” nearly 20 years after the issue was first published.

It isn’t a stretch to imagine that the missing name speaks to the risks of owning or being linked with such a magazine in Nazi Germany, according to Andrew Stewart, the reading room co-ordinator at the University of Toronto’s Thomas Fisher Rare Book Library.

“There’s not much information about gay lives at this point because people were very much closeted,” Stewart says.

“It’s very unusual to have people be so open about their private stories and desires like this. I think that’s where the value lies – in that they are speaking their minds and attaching their names to articles, which would have been very risky at the time.”

Der Eigene provides a rare window on gay life and the homosexual rights movement in Germany from the end of the German Empire through to the Third Reich, a period when homosexuality was considered criminal. Not many copies of the magazine survived. Researchers say it had just 1,500 subscribers, even at its peak in the 1920s, and that many copies were later destroyed.

U of T Libraries recently acquired five issues of the magazine dating from the 1920s for its collection – plus a donated hardcover version.

Der Eigene – the title loosely translates to “The Self-owner” or “His Own Man” – made its debut in 1896. It was published by Adolf Brand, who gave up his career as a teacher because of his anarchist leanings and became a bookseller and activist. What started out as an anarchist magazine was re-branded an artistic and literary homosexual periodical dedicated to “manly culture.” It contained essays, poems, short stories and photos related to love among men and youths. Some readers submitted personal ads. 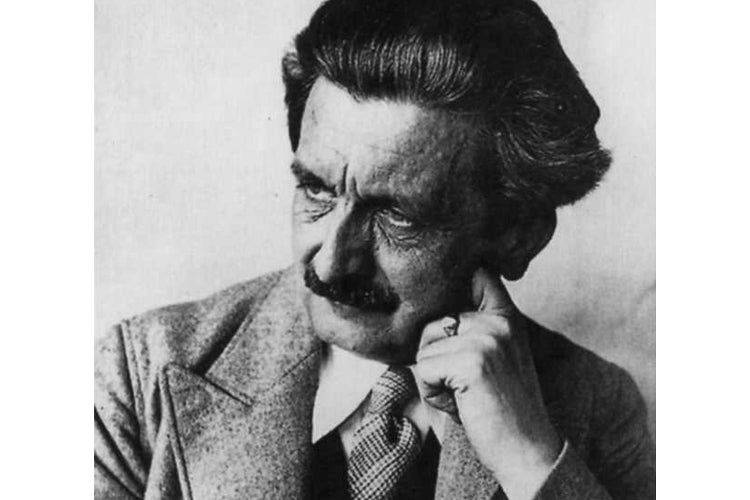 A Der Eigene subscription came with membership to a club, the Community of Self-Owners, in which members discussed issues facing the community and found safety in numbers against the threat of blackmail. Women were not allowed to join.

Brand, too, was controversial. “He was involved in a lot of scandals and basically had a big mouth,” Stewart says.

The magazine didn’t publish regularly because Brand was often cash-strapped or ran into trouble with police. He once caused a sensation by striking a member of the German parliament with a dog whip and later got mixed up in a royal scandal in which men in the Kaiser Wilhelm II’s circle were accused of homosexuality.

Brand was the only one arrested.

He spent another two months in jail on obscenity charges for publishing pictures of nude boys and a poem on friendship. The censor apparently didn’t realize the poem was written by Friedrich Schiller more than a century earlier.

In the more liberal Weimar Republic established after the First World War, the climate was friendlier toward the homosexual rights movement, although homosexuality itself remained illegal. But Brand often didn’t see eye-to-eye with some prominent gay activists of his time, including the doctor Magnus Hirschfeld, the founder the Institute for Sexual Science – the world’s first sexology institute.

“Hirschfeld was about a scientific approach to sexual identity, while for Brand it was about art and anarchism essentially,” says Jennifer Jenkins, an associate professor of German and European history at U of T.

The copies of Der Eigene in the library’s collection will help researchers understand the nuances in opinion and disagreements surrounding homosexuality in Germany at the time, she adds. “It helps students to see that the question of homosexuality in the 1920s was not either-or, whether you’re on the side of supporting it or not,” she says. “There were diverse sexual subcultures.”

The study of queer German history is one of the most active parts of the field today, according to Jenkins.

“It shows aspects of the past which have some proximity to now,” she says. “When I show students pictures of the different gay and lesbian clubs in Berlin, there’s a way in which you see the historical roots of the present day.” 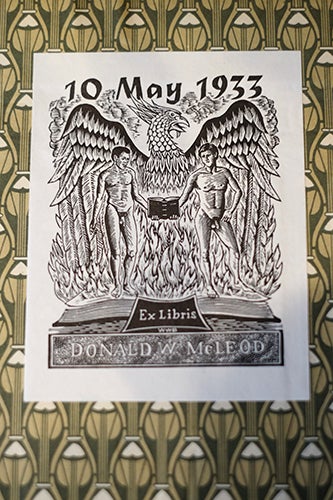 After the Nazis came to power in 1933, stormtroopers raided Brand’s publishing house and seized journals, books and photos. Authorities ruined him financially but spared his life for reasons that remain unknown to this day. He didn’t survive the war, however. In April 1945, he was killed in an Allied bombing.

As for Hirschfeld, who was Jewish, he faced persecution and left Germany in 1932, living out his final years in France. The institute and its archives – his life’s work – were plundered.

The date when much gay-themed literature was burned in bonfires in Berlin and elsewhere in Germany appears on a bookplate in a hardcover issue of Der Eigene (left), which was donated to Fisher by U of T librarian Donald McLeod.

“It’s important that Fisher library has at least a small collection [of Der Eigene] for study,” McLeod says.

In addition to being the first-ever gay periodical, he says, “they were also beautifully produced and stand as works of art.”