U of T's Dr. Jack Tu's work drew international acclaim but he was 'kind and gentle and humble' 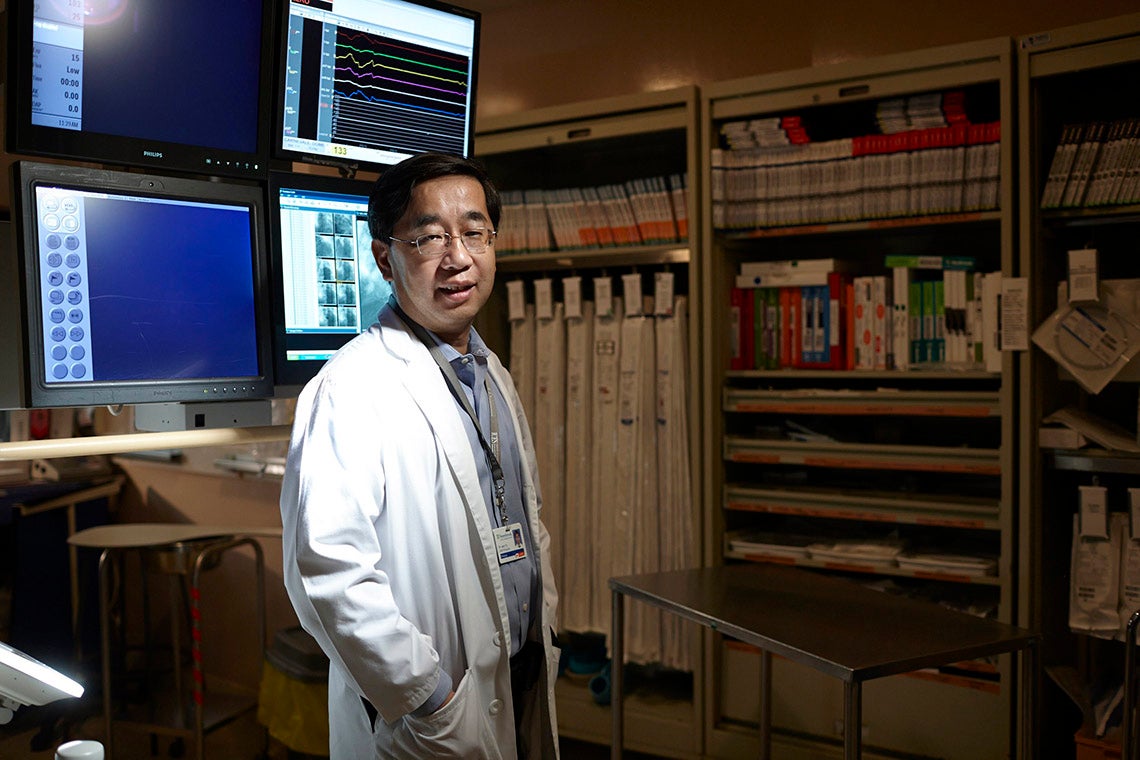 U of T President Emeritus David Naylor said when he was Dr. Jack Tu’s academic mentor in the 1990s, there was not much need for mentoring. “I was not his thesis supervisor so much as his thesis spectator,” he said (photos courtesy of Sunnybrook Hospital)

Dr. Jack Tu was a cardiologist and researcher whose work brought him international acclaim and recognition, but who remained modest and soft-spoken and shared the limelight with others.

He demonstrated “off-the-wall brilliance” but he was also “a kind and gentle and humble person,” said Gillian Hawker, chair of the department of medicine at the University of Toronto. “That often doesn’t go together.”

Tu, who was a professor in U of T’s department of medicine and the Institute of Health Policy, Management and Evaluation, died suddenly on May 30 at the age of 53. His death, of a heart attack, was “hugely and horribly ironic” Hawker said, given his enormous contributions to the study of heart health.

Tu’s work involved using sophisticated analytical tools – including what is known as big data – to determine the factors that impact heart disease. He helped figure out how a person’s lifestyle, where they live, or their ethnic background, affects their likelihood of getting cardiovascular disease and then surviving it after treatment. His work has saved many lives in Canada and elsewhere.

Tu was highly collaborative in his work, forging ties with other researchers across Canada and around the world, all of whom were shocked and dismayed by his death. He was the “glue” on many projects, Hawker said. “He had tentacles in so many things and was quietly moving so much along, in terms of our understanding of cardiovascular disease and how to prevent it.”

As well as his position at U of T, Tu was also a senior scientist in the cardiovascular research program at the Institute for Clinical Evaluative Sciences, where much of his research work was conducted, and he was a staff physician at the Sunnybrook Health Sciences Centre. He published hundreds of papers and won many awards, but always made sure his colleagues and team members got credit for their part in the work.

One of the keys to Tu’s success, Hawker said, was that he was very good at explaining his work and why it was important, to policy-makers, educators, and the public. He was often quoted in the media, offering clear descriptions of his research and its significance. In a 2014 interview with the Globe and Mail, he concisely explained the connections between a consistently active lifestyle and heart health: “The key to [cardiovascular disease] prevention is setting realistic goals, establishing routines and finding fun, active things that you can do with friends, like playing sports, gardening, or walking your dog,” Tu said. “If you do, there is a far greater likelihood that you will stick to it long term.”

His research resonated with the public partly because it showed that where you live in Canada is a crucial factor in whether you will get hit with cardiovascular disease, the kind of medical treatment you will likely get if that happens, and what you will experience after you have a heart attack or stroke.

His work also underlined the need to extend heart research well beyond the traditional risk group of middle-aged Caucasian males. Far more work is needed to be done on diverse populations and on women, he said. To do this, he and his colleagues set up a large national study of people from a variety of ethnic backgrounds to find out what factors might lead to chronic diseases in each group.

In a 2016 interview, Tu modestly described his work as focusing on gaps in the delivery of care to cardiovascular patients, and how that can be improved. “I would like to have an impact on improving patient outcomes,” he said.

Tu was also an effective mentor to younger researchers and medical students.

“He was really very humble and approachable,” said his former student Natascha Crispino, now a family and community doctor in Toronto. Some teaching supervisors were very intimidating, she said, but Tu was different. “He took the time to really teach around all the cases,” Crispino said, and he paid attention to each student’s skills and interests. “He identified what an individual’s strengths were and tried to highlight them and nurture them.”

Crispino said it was clear that Tu had highly altruistic values. “He wanted to make health care, and life, better for everyone in Canada and the world,” she said. “And he was very willing to share his knowledge and help teach a younger generation.”

Jack Ven Tu was born on March 1, 1965, in Taipei, Taiwan, and came to Canada with his parents at the age of two when his father, a psychiatrist, took a position at Queen’s University in Kingston.

He excelled in school, and was very interested in science, said his sister Dr. Karen Tu, a professor in U of T’s Faculty of Medicine. In Grade 7, he won a local science fair in Kingston, and then went on to compete nationally.

Jack was not a difficult child for his parents, and never went through a rebellious stage, Karen said. He was very interested in computers, and was thrilled to spend one summer in California with an aunt who had opened one of the first Apple Computer retail outlets, in San Diego. But he was not just focused on science – he played hockey and loved tennis, a sport he participated in for the rest of his life. He finished high school a year early, Karen said, then went to medical school after just one year of undergraduate work. In 1988, at the age of 23, he graduated from the University of Western Ontario (now Western University), the youngest in his med school class.

One of his roommates from Western who became a lifelong friend, Kevin Glasgow, described Tu in a funeral eulogy as “extremely messy in those days.” But he was also a loyal friend, Glasgow said, and “a very decent, humble and thoughtful person.”

Towards the end of medical school, Tu decided to become a medical researcher. He came to the U of T for a master's in clinical epidemiology during his residency in Toronto. Later he went to Harvard for a PhD, writing his doctoral dissertation on the quality of cardiac surgical care in Ontario.

U of T President Emeritus David Naylor, who was among the founders of the Institute for Clinical Evaluative Sciences which Tu joined in the 1990s, said he was very impressed at the time by the young man’s credentials and cutting-edge knowledge of artificial intelligence and analytics. Naylor also warmed to Tu personally. “When he arrived in person, I liked a couple of things instantly,” he said in his eulogy. “His eyes radiated intelligence, and he had a great smile – a gap-toothed grin that lit up his whole face.”

Naylor said he was, in theory, Tu’s academic mentor, but there was not much need for mentoring. “I was not his thesis supervisor so much as his thesis spectator.”

For several years they collaborated on research projects at ICES. “Jack was the brains of the operation,” Naylor said, “generating one idea after another, and doing or overseeing the analyses”

One day, Naylor said, Tu took him aside and told him about Jane, who was to become his wife. “It was wonderfully apparent that this was a big romance,” Naylor said. He noted that Tu had also adopted a new haircut and was visibly less dishevelled.

The couple had one son Eric, who is now 15. Tu doted on Eric, and talked proudly to his colleagues of his son’s many accomplishments. “He was totally into Eric’s activities, and nurturing and providing opportunities for Eric,” Tu’s sister Karen said. He learned to play basketball after his son took up an interest in the game, and he bought an expensive Steinway piano after Eric demonstrated he was a gifted pianist.

“Jack approached everything in his life through research and analysis [so he] fervently researched schools, activities and experiences for Eric,” Karen said.

Andy Smith, president and CEO of the Sunnybrook Health Sciences Centre and a U of T professor of surgery, said Tu managed to combine both brilliance and effectiveness, doing research that could prompt action and save lives.That’s not an easy thing, he added, in an environment where policy-makers and physicians are often resistant to change.

While quiet and softspoken, Tu was also a superb communicator who could translate complex ideas into a message that “grabs at both the heart and the mind,” Smith said.

“He was a rare, rare breed of excellent human, who was also an excellent clinical doctor, but then added that most extraordinary highest level of science that truly changed lives – not just one at a time, but hundreds and thousands,” Smith said.

Tu leaves his parents Jun-bi and Beth, his wife Jane and son Eric, and sister Karen.