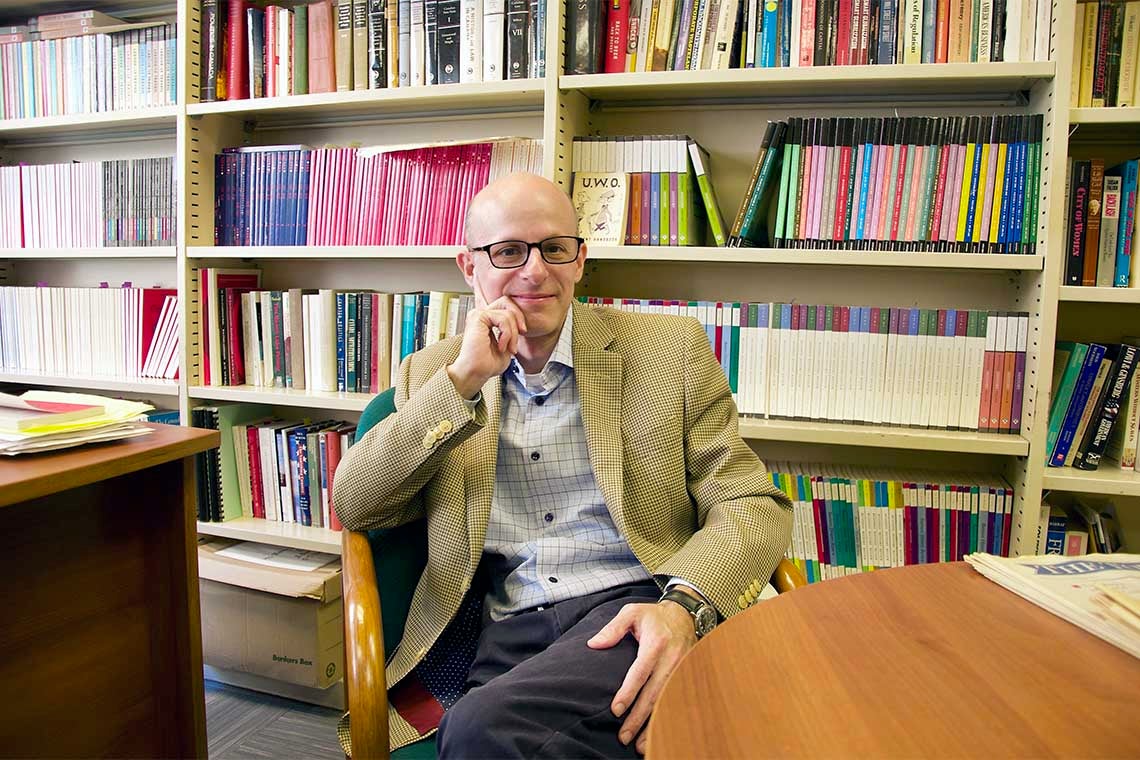 “A lot of my courses are around destroying the myth that Canadian history is boring," says Dimitry Anastakis, a professor of history at U of T (photo by Diana Tyszko)

Dimitry Anastakis is searching for diamonds on Amazon Prime.

Actually, he's looking for cubic zirconia that he can pass off as diamonds to his class later this week.

The professor in the University of Toronto's department of history, who specializes in the intersection of business, the state, politics and globalization in post-1945 Canada, is teaching a course on commodities called Going Global from Coffee, Rubber, Diamonds and Furs to Oil.

“You’ve got to make it tangible and real for students,” says Anastakis, who joined the Faculty of Arts & Science as the newly appointed L.R. Wilson/R.J. Currie Chair in Canadian Business History earlier this summer and is cross-appointed to the Rotman School of Management. “It’s not all about some guy in front of them talking.”

Anastakis has been bringing something tactile to class each week to complement his lecture on that commodity’s connection to Canadian history.

So far, his students have seen a 100-year-old beaver fur top hat – a status symbol for the young up-and-coming businessmen of the 18th and 19th centuries – that has now found a home on one of his jam-packed bookshelves.

He also has a Hudson's Bay Company point blanket stashed under his desk. He brings it out and quickly indicates that the black lines – or points – stitched into the blanket once signified how much it was worth in beaver pelts.

It’s all about making history accessible to his students.

“The one remark I get far more often from students is that they didn't realize how interesting Canadian history was,” says Anastakis. “A lot of my courses are around destroying the myth that Canadian history is boring.

“When you shift your perspective and look at Canadian history in an interesting and engaging way, you realize it's actually fascinating.”

Anastakis’s own interest in Canadian history started at an early age. He says being the child of Greek immigrants made him look at Canada differently.

“I was always interested in how it functioned and why it functioned. I wanted to understand Canada better because I saw it through the eyes of a newcomer.”

And while some told him he should be focusing on Greek history instead, it simply didn’t interest him as much as the Canadian story.

“I always felt, not that Canadian history was neglected, but that there was enough history of the rest of the world,” says Anastakis. “So maybe we should all chip in on this stuff.”

Chipping in has led to Anastakis publishing nine books and edited collections about Canadian history, including three on the Canadian automotive industry, which he says is funny since he’s not all that interested in cars.

“I’m not a gearhead or anything,” says Anastakis. “Like, if your car breaks down on the side of the highway, don’t call me.”

But the issues around public policy, political economy and the intersection of the state, business and industry drew him to the Canada-U.S. Auto Pact of 1965 when he started working on his PhD, kickstarting his career as an expert on the Canadian automotive industry and the impact of cars on Canadian life.

It’s a field that has seen a lot of change over the years as Canadian auto manufacturing plants have begun to shutter throughout the country in the transition from the third industrial revolution to the fourth – that is, a shift towards artificial intelligence, robotics and automation.

But Anastakis says it’s not all bad. “I don't want to be all doom and gloom about the auto industry, because while it's challenged, there's still a really large footprint here. And it's such an important footprint that as long as Canadians, Canadian policy-makers and the auto companies themselves recognize the importance of the industry for Canada, it will maintain itself in Canada to some degree,” says Anastakis.

Anastakis’s research into the Canadian auto industry will continue during his time at U of T as he works to finish a book he’s been writing about New Brunswick’s infamous Bricklin SV-1 – a two-seater sports car known for its DeLorean-like gull-wing doors. In the 1970s, the New Brunswick government lost $25 million as a result of its support for the Bricklin.

After that, he’ll take on two new projects.

One will explore the emergence of neoliberalism in Canada, specifically free trade from the election of 1911 to the Canada-U.S. Free Trade Agreement in the 1980s. The other will build upon his existing work to examine the last 30 years of the Canadian auto industry – its evolution from free trade to the present.

Beyond his own research, Anastakis will also take on the mandate of advancing Canadian business history as the newly appointed L.R. Wilson/R.J. Currie Chair in Canadian Business History.

“It’s important to get people to realize that business history really touches upon all kinds of different aspects within the historical community.”

As for what Anastakis hopes students take away from his classes, it’s simple: the importance of history.

“History gets a bad rap. It's always Professor Binns, the ghost at Hogwarts teaching history,” says Anastakis of the history of magic professor from the Harry Potter series known for his less-than-thrilling lectures. “But in fact, that's the exact opposite of what history is all about. History is about the now and it's really about the future as well. It’s about understanding the world and the context of the world right now.

“And history is the best tool to do so.”