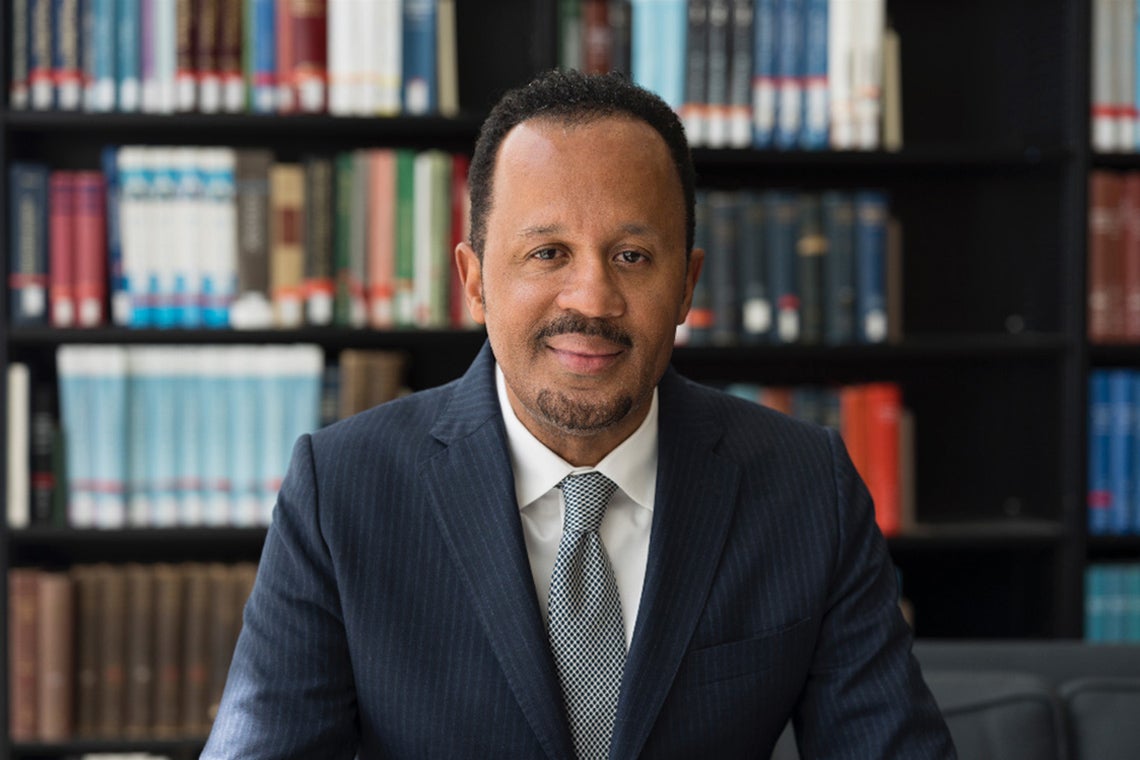 In his new book, "America the Beautiful and Violent," Dexter Voisin, dean of U of T's Factor-Inwentash Faculty of Social Work, calls into question the systemic issues that are at the root of urban violence (photo by Sean Blackwell)

Five people were killed and 43 people were injured in shootings that took place over the weekend in Chicago. This spate of shootings is nothing new for the third most populous city in the United States, but looking deeper into what drives the ongoing violence exposes a much more complex story.

In his new book, America the Beautiful and Violent, Dexter Voisin, the University of Toronto’s dean of the Factor-Inwentash Faculty of Social Work, calls into question the systemic issues that are at the root of urban violence.

Voisin spent two decades in Chicago researching and working with communities dealing with trauma. He says the book is a response to the simplified ways politicians, law enforcement and the media talk about neighbourhood violence.

“I realized that story really needed a solid yet accessible treatise of a different nature, not just a typical academic manuscript, but one that really captured the lives, the struggle, the resiliency, the potential of these communities to grow and to push forward even in the face of gun violence, structural violence and economic violence,” says Voisin.

“So that really became the impetus for the book.”

While the book focuses on Chicago, it describes a more universal narrative, he says.

“It’s really a larger story about many communities across the United States and the globe that are struggling with parallel issues.”

Beyond neighbourhood violence, Voisin writes of the double standard that exists when perpetrators of violence are white versus Black – particularly in light of the mass shootings that have taken place across the U.S. in recent years.

U of T News spoke with Voisin about his book and about the issues that drive violence in cities around the world. 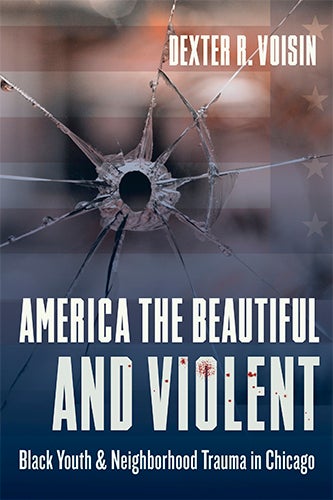 You describe violence in a very specific way in the book. How do you define it?

Very often people think about violence in terms of being interpersonal – they think about domestic violence, physical violence or gun-related violence. All of these are aspects of violence but I call them the tip of the iceberg.

In sociology, we talk about aspects of structural violence – the systems in place within the structures of society that are embedded almost in invisible ways that lead to a restriction of opportunities, a restriction of potential or an attack on human potential.

Many of these forms of violence might be gender-based violence, race-based violence, violence based on immigration status, on sexual orientation, on disabilities. Structural violence is all of the structures in society where the privileges of one group disadvantage individuals of another group.

In my book, I talk about violence in a more global, holistic perspective, but I also trace how these forms of structural violence over several decades have led to pockets of concentrated poverty in many major American cities – Chicago in particular – and how structural violence has led the manifestation of what we have come to know as neighbourhood violence, Black-on-Black or Brown-on-Brown violence.

Why is it important to dig deeper into the structural roots of neighbourhood violence?

Very often there are simplistic and flat narratives when there are shootings in poor communities and outsiders or persons of privilege view the manifestation of such acts as being attributed to moral deficits. These statements were often implied or made by Rahm Emanuel, the former mayor of Chicago.

These are oversimplistic responses to complex issues that are really driven by larger structural issues; the response to violent societal structures; decades of uneven wealth and opportunity distribution; or the manifestations of intergenerational individual and community traumas.

In the book, I talk about the notion of racialized capitalism and I tie that to the prison-industrial complex, which in the United States is the largest in the world. It has a fraction of the world's population but it accounts for more than half of the world's prison population.

The fact is that American economic and financial gain have been structured literally on the backs of poor whites, Black and Brown people. There's a whole economic machine behind the prison-industrial complex.

When we look at all the policing, and high rates of arrest within minority communities, that contributes to the fragmentation of families – and as a result, these kids are disproportionately thrust into the child welfare system. The cycle of intergenerational trauma that it causes is really important to look at from a long-shot view. If not, we end up viewing individuals in oversimplistic ways and blaming victims who are the bearers of these forms of structural violence and embedded social inequalities.

When U.S. President Donald Trump tweets about poverty and crime in cities like Chicago (which you mention in the book) and, recently, Baltimore – what do you think the effect is of the kind of rhetoric he uses?

The two cities that are targeted by Trump are primarily Democratic cities. This is a political play.

This is oversimplification of complex issues and it's playing politics, when the issues really affect all of us as Americans or as Canadians.

Data shows when you have high levels of disproportionality in societal wealth, the overall health and well-being of those societies suffers, psychologically and physically. The reality is we are all implicated in these societal hierarchies and are all impacted by them.

You write in the book about the way white and non-white shooters are portrayed by politicians and the media. In the context of the three mass shootings that took place in California, Texas and Ohio over the past few weeks, how does this play out?

We know from the data that most mass shootings are committed by white men. Very often, when a mass shooting occurs, that one white individual and the entire race is not demonized – it's said that this person was mentally ill.

If a racialized immigrant were to commit a crime or a mass murder the response is more vigorous and generalized –all immigrants are terrorists, coming across the border, hoodlums and rapists. We have heard this many, many times in American political discourse.

Similarly, when a suspect is a Black man, very often the terms "predator," "super predator," "animals," are employed – the absence of white privilege leads to the negative stereotype extending beyond the individual to an entire race.

Mass shootings, as horrific as they are, count for less than two per cent of all homicides in the United States – and yet they get the most coverage, which allows for them to become sensationalized. The bulk of American homicides and non-fatalities occurs in low-income cities across America that are void of economic opportunities, proliferated by schools that don’t teach, joblessness, and single-female-headed households where persons are living at or below the poverty line. Communities that have not been kissed by America’s prosperity.

Very often such structural violence is not even recognized in the media. While the media was covering these three recent mass shootings, over 50 people were shot in Chicago over that same period of time. No attention was brought to that, in part, because many of the victims were Black and Brown individuals.

How does the issue of gun control feed into the narratives of both neighbourhood violence and mass shootings?

Over 80 per cent of Americans favour some form of gun control and background checks. The American people are in favour but many politicians lack the courage and leadership to respond to America’s need.

[The United States is] the most armed society in the world – it has more guns than it has individuals, and there is this falsehood that more guns would keep us safe. In reality, the data and the experiences show the opposite actually happens.

Universal background checks, I think, are a reasonable check and balance, [as is] sensible legislation and having a federal policy around access to guns. Now it is deregulated and left to a state-by-state mandate and this isn't working.

You’ve lived in Chicago and Toronto – do you see parallels between the two cities?

Absolutely. Other than the obvious – being two great North American cities by the lake – Toronto and other major Canadian cities are also struggling with issues of racial reconciliation.

When people are invisible in society, they are unable to see true reflections of what they can become and achieve.

What are some of the policy recommendations you suggest in the book?

Very often in most societies, you have a small number of people who have the greatest need. Those individuals show up across many different systems of “care,” but that doesn't necessarily mean those systems are caring.

Unrecognized or misdiagnosed trauma undergirds many of the reasons why some people show up in these systems, where they are invariably traumatized or re-traumatized by these systems of care or “control.” However, very often these social systems operate in isolation – so the child welfare system is not really connected to the juvenile justice system or the prison system. Databases are not really connected so you can’t track and support people as they move through these various systems.

And once you enter child welfare, you have a higher likelihood of entering the juvenile justice or the prison systems.

Taking a trauma-informed approach across these systems is one way. Also recognizing the need for prevention and treatment rather than punishment. The data show that an excess or inappropriate use of systems of correction for [minor] offenses does not reduce crime but actually increases crime.

Thinking about interconnection between systems and the role of trauma and how it manifests rather than punishing it – these are necessary steps forward towards a more just and equitable society.

Equally important are research-based, community-based agencies that are culturally responsive within those neighbourhoods of need that can provide preventative and treatment services, which are less costly, before folks are ushered into these formal, very often non-responsive systems of care.