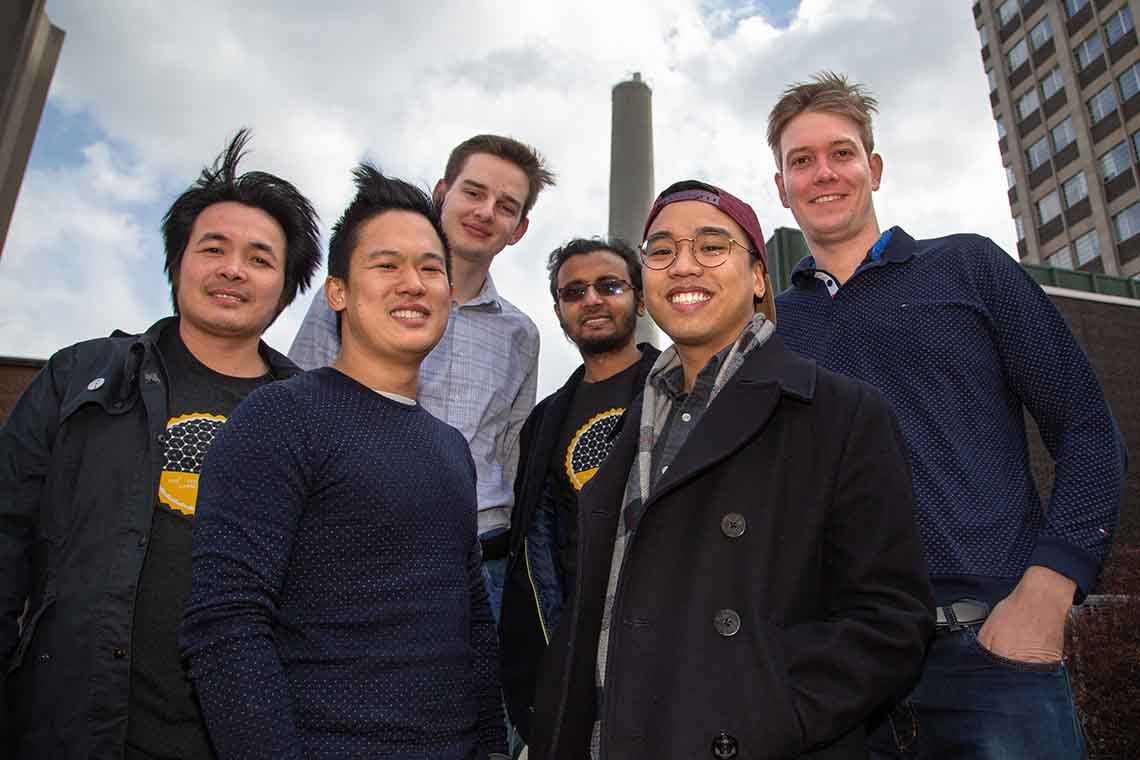 U of T Engineering’s CERT team, led by Alex Ip (second from left), is one of five teams from academia and industry to advance to the finals of the international NRG COSIA Carbon XPRIZE competition (photo by Laura Pedersen)

A team led by the University of Toronto's Faculty of Applied Science & Engineering that is working to capture greenhouse gas and recycle it into useful chemicals has advanced to the finals of the international NRG COSIA Carbon XPRIZE.

The competition presents this challenge: capture carbon emissions from power plants and efficiently convert them into valuable chemical products.

CERT, a team of two dozen multidisciplinary researchers working with Professors Ted Sargent and David Sinton, is one of just five teams around the world to make it into the third and final round in the natural gas plant stream. Thirty-eight teams from five countries, and from both industry and academia, entered the competition, with 27 qualifying for Round 2.

The field is now down to five, with an additional five finalist teams working to capture and convert emissions from coal-fired power plants.

Currently, power generation produces more than 32 gigatonnes of climate-warming carbon dioxide (CO2) annually – that’s 32,000,000,000 tonnes. Renewable forms of energy, such as solar and wind, hold promise to help reduce that number, and have decreased in price and increased in capacity in recent years. By 2022, global renewable electricity generation is expected to grow by another one-third to over 8,000 terrawatts per hour.

CERT capitalizes on this trend by using green energy to capture and convert CO2 to useful chemical compounds.

“The Carbon XPRIZE aims to catalyze the development of practical solutions to one of the most urgent challenges of our time,” says Sargent, a professor in the department of electrical and computer engineering and U of T's vice-president international. “Our team thanks its supporters in helping us pursue and meet a truly ambitious goal: upgrade waste CO2 into a valuable product.”

CERT leveraged the team’s expertise in electrocatalysis to develop nanoparticle-based catalysts that use clean electricity to recycle CO2 into valuable carbon-based products. The team demonstrated they could convert kilograms of CO2 into carbon monoxide, a widely utilized industrial chemical.

“In Round 2 our goal was to scale our technology up to the multi-kilogram scale, a major step up from in the lab where we’re working at gram scale,” says Alexander Ip, director of research and partnerships for the Sargent Group. “Our team unites brilliant minds in materials, modelling, systems engineering – we’ve made major improvements to both the selectivity and efficiency of catalysts.”

To achieve this rapid scale-up, CERT overcame significant materials and engineering challenges in just one year: They advanced their technology from a catalyst the size of a fingernail in a beaker to a continuous flow system the size of a small car.

“Any important engineering problem brings unexpected challenges and demands creative solutions,” says Sinton, a professor in the department of mechanical and industrial engineering. “The Carbon XPRIZE competition is timely and important because it rewards the combination of technological innovation and scaling at the heart of the CO2 challenge.  We knew we had an amazing team, but it’s still incredibly rewarding to look back on the truly stunning achievements of U of T researchers.”

A team of XPRIZE judges visited Toronto in December to evaluate CERT’s capabilities and potential for Round 3. CERT spent three days with the XPRIZE team at the XEROX Research Centre of Canada in Mississauga, where the judges evaluated their technology and data. They conducted their Round 2 research with $833,333 through a TargetGHG Stream 3 grant, supported by Ontario’s $74 million Green Investment Fund, and administered by Ontario Centres of Excellence (OCE). The work was also conducted in partnership with Quebec-based company CO2 Solutions Inc., which provided the team with carbon capture technology.

“Everyone at OCE is incredibly proud to see CERT advance in the prestigious international NRG COSIA Carbon XPRIZE competition,” says Tom Corr, president and CEO of OCE. “Having Ontario-based research and talent in greenhouse gas reduction being recognized at a global level is inspiring, and demonstrates how programs like TargetGHG funded by the government are helping Ontario lead the fight against climate change and transition to a low carbon economy.”

"Ontario congratulates the CERT team as they advance to the finals of the international Carbon XPRIZE,” says Reza Moridi, minister of research, innovation and science. “This impressive achievement is a testament to Ontario’s clean-tech talent and research excellence.  This province is proud to have supported CERT’s efforts as we work together to reduce greenhouse gas pollution and create jobs in the clean-tech sector.”

Next, CERT will have to implement its capture-and-conversion system at a testing facility in Alberta, where they will tap the flue emissions from an active natural gas power plant.

The five teams to successfully demonstrate their technology in Round 2 share US$2.5-million in funding, US$500,000 each to advance their respective solutions. The winner of Round 3 earns a US$7.5-million grand prize, no strings attached.

"Team CERT's XPRIZE demonstration is a major advance in scaling up electrocatalytic CO2 utilization technologies, an important step in translating science from the bench scale to practical implementation.” said Thomas F. Jaramillo, associate professor in Stanford University’s department of chemical engineering. Jaramillo is also the director of the SUNCAT Center for Interface Science and Catalysis, a Stanford-SLAC partnership.

“The NRG COSIA Carbon XPRIZE put in the prize money to kickstart the whole thing, and one of the goals of the competition is that none of the technologies would stop there,” says Ip. “They’re trying to build a robust innovation ecosystem around CO2 conversion.”

Regardless of the outcome, Ip sees the competition as just the beginning for CERT’s technology. “I think our solution has a lot of industry potential.”