Lipids may predict which gestational diabetes patients will develop Type 2: U of T study 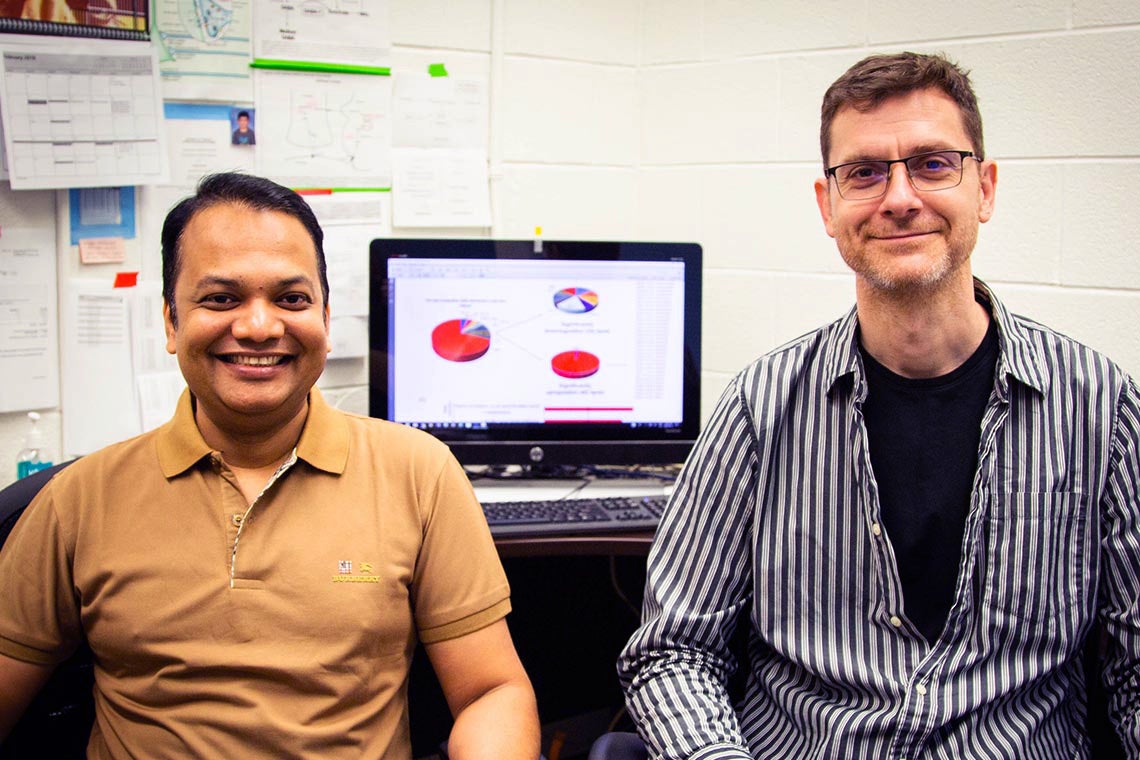 Every year in Canada as many as 20 per cent of pregnant women develop gestational diabetes mellitus – a transient form of diabetes – and are about seven times more likely to develop Type 2 diabetes in the future.

While there aren’t many tools to predict who will ultimately develop the chronic condition, research co-led by the University of Toronto's Michael Wheeler and Brian Cox in the Faculty of Medicine's department of physiology is shedding new light on how to determine whether or not women who’ve had GDM will eventually go on to develop Type 2.

The study, whose first author was post-doctoral researcher Saifur Khan, was recently published in the journal Diabetologia.

“Everybody wants to believe they’ll be in the 50 per cent who won’t develop Type 2 diabetes,” says Cox, who is an associate professor.

“If we could be more confident in predicting who will or won’t get diabetes, that might motivate people to come back for assessment or take on lifestyle interventions to help them reduce their disease risk.”

The study looked at a group of about 1,000 women in Southern California who had gestational diabetes. After they delivered, scientists followed the women’s health for nearly a decade using oral glucose tolerance tests and a variety of other biochemical and lifestyle tests.

The team identified seven lipids that – depending on their levels – predicted with 92 per cent accuracy whether the women would develop Type 2. To do it, they used mass spectrometry and artificial intelligence, a technique that can quantify and identify compounds within a sample and help researchers better understand the makeup of different molecules and their association with diabetes risk.

“Everybody focuses on blood sugar. But circulating fats – also known as lipids – are also important in the disease,” says Wheeler, a professor who also has appointments in the department of medicine and the Institute of Medical Science.

“The relationship could be causal, through obesity or the types of fats people have in their diets. Knowing this, we used lipidomics – which allowed us to look at more than a thousand lipids in a short time from one small blood sample.”

Genetics, regional differences and environmental factors can all influence people’s lipid levels. The hope is to find a simple lipid signature that is common among all women that can predict diabetes. The seven lipids identified in this study represent a significant step towards this goal with respect to those with gestational diabetes who transition to Type 2.

The team plans to explore whether their findings are more broadly applicable.

As a next step, Wheeler and Cox hope to develop a test that could be used in a clinical chemistry lab, where many patients already have multiple types of blood work done. Cox points out there are already assays to measure other lipids like cholesterol. Now, the pair say it’s a question of developing something similar to test for the seven lipids identified in the study.

The idea, says Wheeler, is to create a simple test to more accurately predict future Type 2 using a small blood sample taken before women leave the hospital after delivering their babies – or even a few weeks or months later.

The Society of Gynaecologists and Obstetricians of Canada currently recommends women who’ve had gestational diabetes be screened for diabetes between six weeks and six months following delivery, with annual follow ups after that. But less than half of this group take the initial test and just 20 per cent go back for their annual screen.

Wheeler and Cox’s most recent study builds on earlier research published in 2016 in which they identified a series of metabolites that could predict Type 2 in women who had experienced gestational diabetes.

They’ve patented some of their earlier findings and connected with U of T’s Innovations & Partnerships Office in the hopes of one day developing a diagnostic test. However, the pair emphasizes that a clinical application for their findings is still years away.

Wheeler says it may be possible to use the research to help develop a screening tool for all patients, which could have a massive impact globally.

“It shows the necessity of discovery-based science when it comes to developing things that could be translated into new medical applications,” says Cox. “There’s a lot of pressure on translation, but if we don’t do this basic research, there’s nothing to translate.”