U of T researchers unravel mysteries of ancient Buddhist manuscripts 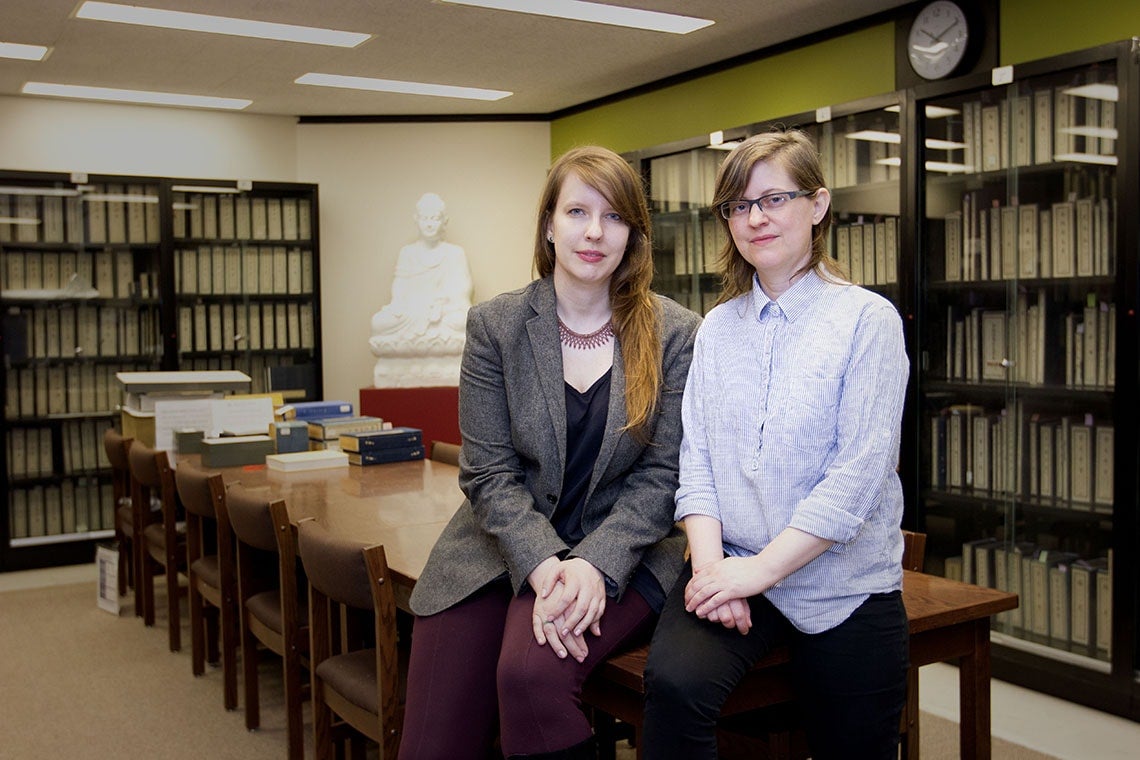 PhD student Annie Heckman (left) and Amanda Goodman, an assistant professor of Chinese Buddhism at U of T’s department for the study of religion (photo by Jaclyn Shapiro)

Along the Old Silk Road – the ancient network of trade routes that once linked China and the West – is a complex of roughly 500 rock-cut caves carved into the cliffs above the Daquan River. The caves, known as the Mogao cave complex, are located near the oasis town of Dunhuang, perched at the edge of the Gobi Desert in what is now northwest China. Up until the disintegration of the Mongol empire in the 14th century, traders, pilgrims and other travellers would stop at this hub of commerce and religion to secure provisions, pray for the journey ahead, or give thanks for their survival. This was before Islam conquered the region and sea routes began to dominate China’s trade with the outside world.

Adorned with Buddhist statuary and frescoes, the individual cave shrines, which date back to the fourth century CE, were active sites of Buddhist study and worship for more than 1,000 years. The major cave chapels were sponsored by local patrons: eminent monks and nuns, the ruling elite and foreign dignitaries – even Chinese emperors. Other caves are thought to have been commissioned by travelling merchants, military officers and lay Buddhist societies. Monks would visit at regular intervals to pay homage to the Buddhas, and members of the local Buddhist community would commemorate important Buddhist ritual days at the site. Hundreds of years later, one can still see iron hooks in the ceilings where banners once hung, and soot marks from the oil lamps that burned brightly on the altars during the annual rites.

One of the caves, now referred to as cave 17, or the “library cave,” originally served as a mortuary for an eminent local monk named Hong Bian. As memory of Hong Bian grew distant, locals began storing Buddhist manuscripts and ritual paraphernalia in the chamber, until it was sealed, likely sometime in the early 11th century.

Then in 1900, a Daoist monk named Wang Yuanlu opened up the cave, and discovered what would turn out to be the largest cache of medieval manuscripts in Eurasia – some 60,000 manuscripts, many fragments, as well as fine portable paintings and dozens of statues and banners dating mostly from the ninth, 10th and early 11th centuries. Included were secular documents as well as works of history, poetry and religion – primarily Buddhism, but also Daoism, Nestorian Christianity and Manichaeism, often written on the backs of recycled manuscripts. A few years later, Wang Yuanlu began selling the manuscripts to Western scholar-explorers, who carried off hoards of artefacts. The artefacts were then scattered around the world – to London, Delhi, Paris and St. Petersburg. One piece – a 10th-century woodblock print of a Buddhist prayer sheet – eventually made its way into the Royal Ontario Museum (ROM) collection, in an exchange with the British Museum. All the manuscript collections are being digitized by the International Dunhuang Project, housed at the British Library, and can be freely accessed online, a boon to scholars.

What was the purpose of the Dunhuang cave library? Was it a sacred waste disposal site? After all, one couldn’t simply discard Buddhist scriptures without risking karmic retribution. And why was cave 17 sealed? Was it because of a threat of an Islamic invasion? These are just some of the mysteries and theories – some since debunked – that have fascinated archaeologists and scholars for more than 100 years.

Amanda Goodman, an assistant professor of Chinese Buddhism at U of T’s department for the study of religion, has a simpler theory: “I think it was an unofficial archive of a small group of local monastics who had a large number of documents that needed to be stored, possibly for repair or to be used to replenish local libraries. Hong Bian’s memorial chapel had fallen into disrepair and the materials just kept accumulating… kind of like your proverbial kitchen drawer. At a certain point, it just filled up and they sealed it.”

We may never know for sure. The first European archaeologist-explorer to visit the site neither knew Chinese nor understood the indigenous archiving system used to organize the manuscripts found in cave 17.

“The traditional Chinese way of classifying things is not A-Z, but rather uses an archaic system for numbering manuscripts, which were further grouped by genre or status, such as ‘damaged’ or ‘pristine’,” explains Goodman. “But in their excitement, the first wave of explorers removed the cloth wrappers used to bundle the manuscripts, to disastrous effect. We’ll probably never have a definitive answer as to why the contents of cave 17 came to be stored together.”

As for when? Scholars guess it was around the year 1003 CE, give or take five years, based on the fact that the most recent documents are from the early 11th century.

Goodman, who is affiliated with U of T’s newly launched Robert H. N. Ho Family Foundation Centre for Buddhist Studies, is the only Dunhuang specialist in Canada studying this special cache of manuscripts. Supported by a grant from the Social Sciences and Humanities Council of Canada, and with a small team of graduate research assistants, she is working on Chinese Buddhist ritual manuscripts from the 10th century, identifying, dating, translating and studying them, as she prepares a book, appropriately titled Buddhism from the Margins.

Goodman’s focus is not on the formal or official canonical texts recovered from Dunhuang, but on the “messy manuscripts,” and especially ritual miscellanies, that found their way to London, Paris and Beijing. She is looking at the working or practical canons, including liturgical books, primers, prayer sheets and personal notebooks, which give a clearer picture of what Buddhist study and practice actually looked like at this remote outpost. Tracing distinctive reading marks and scribal conventions, she examines manuscripts cobbled together on recycled slave documents, divorce decrees and other scrap paper (paper was a rare commodity). She looks under corrections that cover up errors like old-fashioned white-out.

“I love the messiness of the manuscripts, and try to find meaning in that messiness,” she says.

These fascinating texts give evidence to an extraordinary cross-fertilization of cultures and religions that occurred during this period in the region.

“There is a significant corpus of bilingual, even multilingual manuscripts,” says Goodman. “To read these texts, you need to know Chinese and Tibetan as well as Khotanese and Uyghur: The scribe or copyist would begin by writing down a prayer in Khotanese, but when you flip the page, you find a Tibetan prayer followed by lengthy tracts written in Chinese. There are also sketches and diagrams scattered throughout these particular manuscripts. What these texts show is that there was significant interaction, in particular between the local Tibetans and Chinese, in the 10th century, and that these Buddhist communities were engaged in a sophisticated conversation with each other.”

In fact, 12 different linguistic groups, including Hebrew, are represented at the site, which makes having a multilingual research team critical to reading both the source texts and the rich body of scholarship – in English, French, Chinese and Japanese – that has been produced in recent years.

One of Goodman’s research assistants is PhD student Annie Heckman, a specialist in French and Tibetan languages who had an active studio and teaching practice in art at Chicago’s DePaul University before deciding to go back to graduate school to pursue Buddhist studies. U of T’s community of Buddhist scholars and the opportunity to work with Goodman on the project were major motivators for Heckman to make the move to Toronto. In addition to reviewing the contemporary French-language materials about mandala sketches at Dunhuang, she is establishing the contents and bibliographical history of Tibetan-language texts that appear as excerpts in ritual manuals.

“This work helps us get a sense of the impact of certain texts over time, allows us to grasp their significance in later Tibetan contexts, and may perhaps lend more insight into how and why they were used in ritual contexts at Dunhuang,” Heckman says.

The ritual texts that the team is studying also give evidence to “hybrid” regional traditions that are markedly different from the Buddhism practised in elite urban monasteries. Goodman explains, “The Tibetan and Chinese ritual materials are pretty parallel in terms of the rituals they are using: If you follow the traditional story of Buddhism you wouldn’t think that Chinese Buddhists of 980 CE were doing the same things as Tibetan Buddhists at that time, but they clearly were at Dunhuang. They were exchanging ideas and texts and mixing indigenous Chinese material like seals that trap demons with Tibetan Buddhist visualization techniques, using every ritual technology at their disposal.”

So far her team has transcribed about a dozen ritual texts that appear on composite manuscripts as movable textual units; one can actually see how individual copyists were moving ritual units around or dropping them from liturgical sequences.

Heckman describes the process of working on Goodman’s project as “unravelling a mystery over time, combining different language capacities to put together the pieces of an ever-growing puzzle.”

Much like the provenance of the caves themselves, Heckman’s ability to decipher the mysteries of the mantras discovered there has been made possible in part because of the spirit of philanthropy that animates Buddhism. Her work is supported by the Phool Maya Chen Scholarship in Buddhist Studies. “When I first received news that I was awarded the scholarship, I felt welcomed into a community of committed scholars, and that my years of study were being recognized through the generosity of our donors,” says Heckman.

“Not only does the scholarship take away some of the material pressures I face as a student, it allows me to devote several hours a day to Tibetan readings, which has been of tremendous benefit to advancing the project, and to take on its challenging questions with even greater energy.”