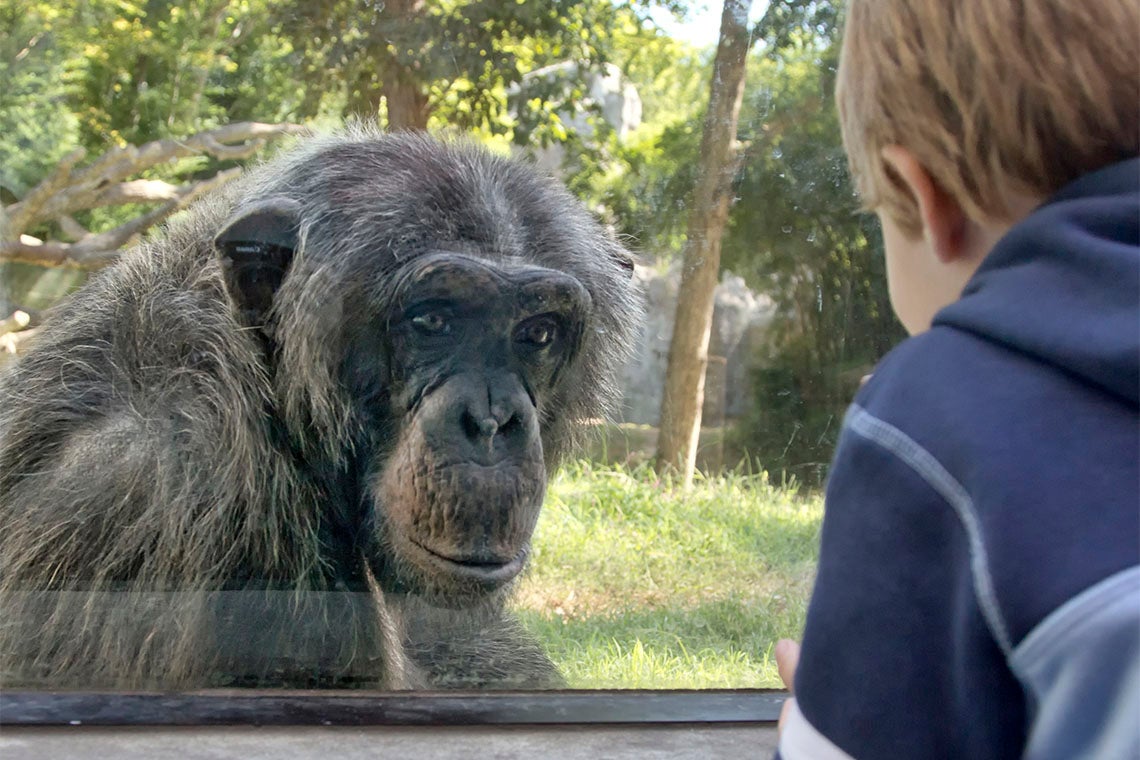 “We think these molecular differences could be driving some of the differences between chimps and humans,” says Sam Lambert, lead author and a former graduate student in the lab of U of T Professor Timothy Hughes (photo by Doris Rudd via Getty Images)

Investigators at the Donnelly Centre for Cellular and Biomolecular Research have found that dozens of genes, previously thought to have similar roles across different organisms, are in fact unique to humans and could help explain how our species came to exist.

The genes code for a class of proteins known as transcription factors, or TFs, which control gene activity. TFs recognize specific snippets of the DNA code, known as motifs, and use them as landing sites to bind the DNA and turn genes on or off.

Previous research had suggested that TFs, which look similar across different organisms, also bind similar motifs – even in species as diverse as fruit flies and humans. But a new study from Professor Timothy Hughes’ lab shows that this is not always the case.

“Even between closely related species there’s a non-negligible portion of TFs that are likely to bind new sequences,” says Sam Lambert, a former graduate student in Hughes’ lab who did most of the work on the paper and has since moved to the University of Cambridge for a post-doctoral stint.

“This means they are likely to have novel functions by regulating different genes, which may be important for species differences.”

Writing in the journal Nature Genetics, the researchers describe a new computational method that allowed them to more accurately predict motif sequences each TF binds in many different species. The findings reveal that some sub-classes of TFs are much more functionally diverse than previously thought.

Even between chimps and humans, whose genomes are 99 per cent identical, there are dozens of TFs which recognize diverse motifs between the two species in a way that would affect expression of hundreds of different genes.

“We think these molecular differences could be driving some of the differences between chimps and humans,” says Lambert, who won a Jennifer Dorrington Graduate Research Award for outstanding doctoral research at U of T’s Faculty of Medicine.

To re-analyze motif sequences, Lambert developed new software which looks for structural similarities between the TFs’ DNA-binding regions that relate to their ability to bind the same or different DNA motifs. If two TFs from different species have a similar composition of amino acids – the building blocks of proteins – they probably bind similar motifs. But unlike older methods, which compare these regions as a whole, Lambert’s automatically assigns greater value to those amino acids which directly contact the DNA – a fraction of the entire region.

In this case, two TFs may look similar overall, but if they differ in the position of these key amino acids, they are more likely to bind different motifs. When Lambert compared all TFs across different species and matched to all available motif sequence data, he found that many human TFs recognize different sequences – and therefore regulate different genes – than versions of the same proteins in other animals.

The finding contradicts earlier research, which stated that almost all of human and fruit fly TFs bind the same motif sequences, and is a call for caution to scientists hoping to draw insights about human TFs by only studying their counterparts in simpler organisms.

“There is this idea that has persevered, which is that the TFs bind almost identical motifs between humans and fruit flies,” says Hughes, who is also a professor in U of T’s department of molecular genetics and a fellow of the Canadian Institute for Advanced Research. “And while there are many examples where these proteins are functionally conserved, this is by no means to the extent that has been accepted.”

As for TFs that have unique human roles, they belong to the rapidly evolving class of so-called C2H2 zinc finger TFs, named for zinc ion-containing finger-like protrusions, with which they bind the DNA. Their role remains an open question, but it is known that organisms with more diverse TFs also have more cell types, which can come together in novel ways to build more complicated bodies.

Hughes is excited about the tantalizing possibility that some of these zinc finger TFs could be responsible for the unique features of human physiology and anatomy – including our immune system and the brain, which are the most complex among animals. Another area of interest is sexual dimorphism: countless visible, and often less obvious, differences between sexes that guide mate selection – decisions that have an immediate impact on reproductive success, and can also have profound impact on physiology in the long term. The peacock’s tail or facial hair in men are classic examples of such features.

“Almost nobody in human genetics studies the molecular basis of sexual dimorphism, yet these are features that all human beings see in each other and that we are all fascinated with,” says Hughes.

“I’m tempted to spend the last half of my career working on this, if I can figure out how to do it.”

The research was supported by grants from the Canadian Institutes of Health Research and the National Science and Engineering Research Council, among others.