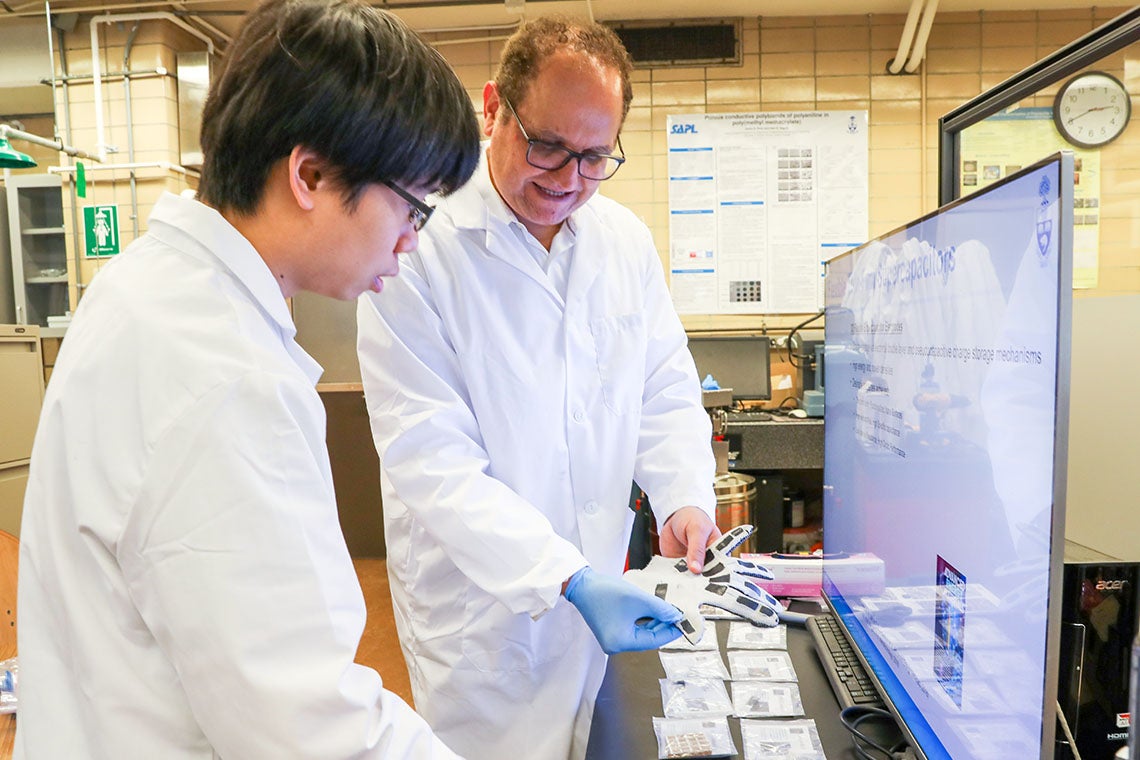 University of Toronto researchers have created a miniature robot that can crawl with inchworm-like motion. The underlying technology could one day transform industries from aviation to smart wearables.

Hani Naguib, a professor in the Faculty of Applied Science & Engineering, and his group specialize in smart materials. One line of their research focuses on electrothermal actuators (ETAs), devices made of specialized polymers that can be programmed to physically respond to electrical or thermal changes.

For example, an ETA could be programmed to mimic muscle reflexes, tensing up when cold and relaxing when hot.

Naguib and his team are applying this technology to the robotics field, creating “soft” robots that can crawl and curl. They believe these could one day replace the bulky, metal-plated bots found in manufacturing industries.

“Right now, the robots you’ll find in industry are heavy, solid and caged off from workers on the factory floor because they pose safety hazards,” says Naguib, who is the director of the Toronto Institute of Advanced Manufacturing and the manufacturing robotics lead of U of T’s Robotics Institute.

“But the manufacturing industry is modernizing to meet demand. More and more, there’s an emphasis on incorporating human-robot interactions. Soft, adaptable robots can leverage that collaboration.”

Although responsive materials have been studied for decades, the team has discovered a novel approach to programming them, resulting in the inchworm motion demonstrated in a paper recently published in Scientific Reports.

“Existing research documents the programming of ETAs from a flat resting state. The shape-programmability of a two-dimensional structure is limited, so the response is just a bending motion,” explains Yu-Chen (Gary) Sun, a PhD candidate and the paper’s lead author.

By contrast, Sun and his co-authors created an ETA with a three-dimensional resting state.

They used a thermal-induced stress relaxation and curing method that opens far more possibilities in shape and movement.

“What’s also novel is the power required to induce the inchworm motion. Ours is more efficient than anything that has existed in research literature so far,” says Sun.

“In situations where humans could be in danger – a gas leak or a fire – we could outfit a crawling robot with a sensor to measure the harmful environment,” explains Naguib. “In aerospace, we could see smart materials being the key to next-generation aircrafts with wings that morph.”

Though he points out it will be some time before the world sees morphed-wing aircraft, the most immediate impact will be seen in wearable technology.

“We’re working to apply this material to garments. These garments would compress or release based on body temperature, which could be therapeutic to athletes,” says Naguib.

The team is also studying whether smart garments could be beneficial for spinal cord injuries and, over the next year, is focused on speeding up the responsive crawling motion and looking at other configurations.

“In this case, we’ve trained it to move like a worm,” says Naguib. “But our innovative approach means we could train robots to mimic many movements – like the wings of a butterfly.”

The researchers received support from the Natural Sciences and Engineering Research Council of Canada and the Ontario government.