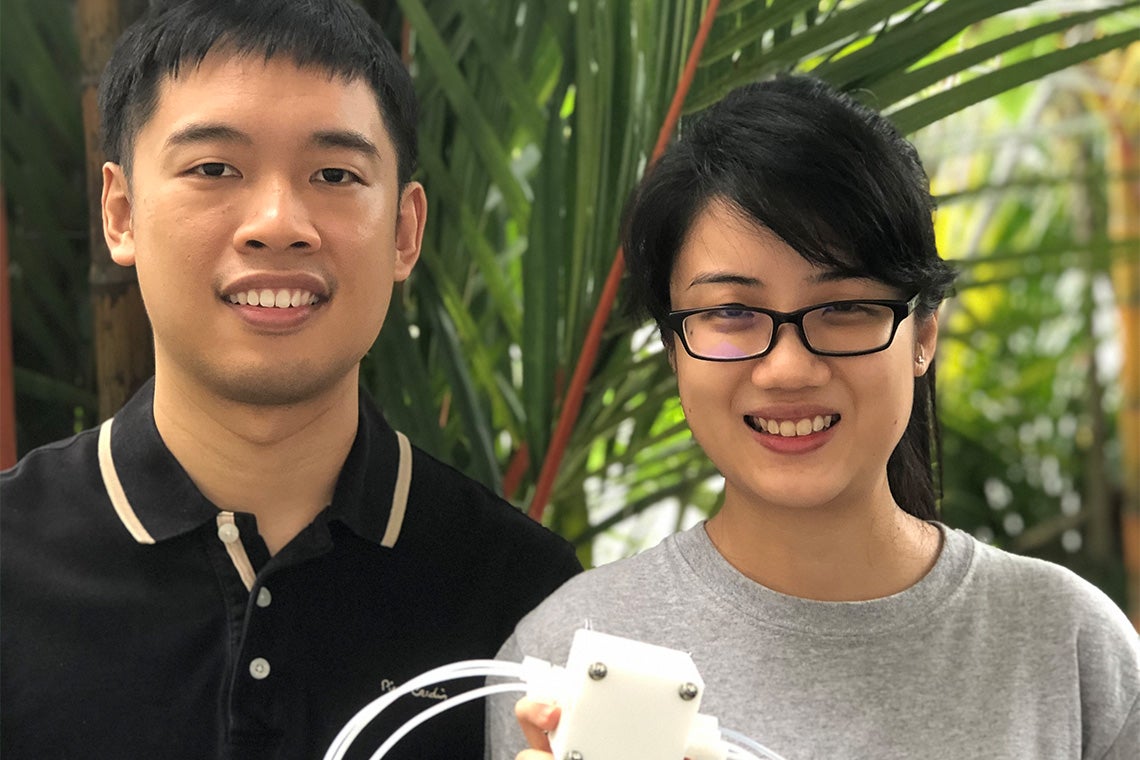 Yanwei Lum (left) and Wan Ru Leow (right) with a prototype electrolyzer. Their low-emission method for converting ethylene to ethylene oxide is described in a new paper in the journal Science (photo courtesy Wan Ru Leow)

From synthetic fabrics to plastic water bottles, the products we use every day have a surprisingly large carbon footprint. But a new electrochemical process developed at the University of Toronto could help decarbonize these common consumer goods.

“The petrochemical industry uses fossil fuels both as raw materials, and also to provide the energy needed to upgrade low-value chemicals into higher-value ones,” says University Professor Ted Sargent of the Edward S. Rogers Sr. department of electrical and computer engineering in the Faculty of Applied Science & Engineering, who is the senior author of a recent paper published in the journal Science.

“Electrochemistry provides alternative pathways that can significantly reduce the emissions associated with the production of everyday materials such as plastics.”

Sargent and his team have already developed highly efficient electrochemical processes for producing ethylene – one of the world’s most common industrial chemicals – from waste CO2 rather than from fossil fuels.

But ethylene is only the first step in a number of complex chemical value chains that eventually end with products such as polyester fabrics or plastic drink bottles. To decarbonize the entire chain, electrochemical alternatives for the subsequent upgrading steps are needed as well.

The team’s latest work focuses on ethylene oxide. Like ethylene, it is one of the world’s most commonly produced chemicals, with about 20 million tonnes generated each year. But because it is slightly higher up the value chain, it can be sold for approximately 1.5 times as much as ethylene. 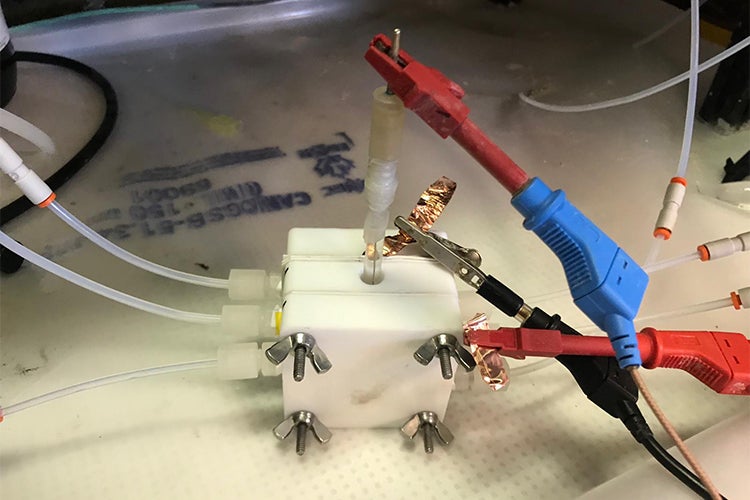 In this prototype electrolyzer, 97 per cent of the ethylene that undergoes the conversion reaction is transformed to ethylene oxide. The electrochemical process provides a low-emission alternative to established industrial methods, which normally generate about a tonne of CO2 per tonne of ethylene oxide (photo courtesy Wan Ru Leow)

The standard way to convert ethylene to ethylene oxide is to mix it with oxygen at high temperatures and pressures. Under these conditions, however, about 14 per cent of the ethylene is wasted – it simply burns, producing CO2. Even more CO2 is generated by burning fossil fuels to power control units that maintain the correct temperature in these systems.

“Right now, for each tonne of ethylene oxide you produce, you generate about a tonne of CO2,” says Wan Ru Leow, a post-doctoral researcher in Sargent’s lab and co-lead author on the paper. “If we instead produce it electrochemically, we can dramatically reduce those emissions.”

Leow examined what it would take to convert ethylene to ethylene oxide in an electrolyzer, a device that uses electricity to drive a chemical reaction. The electricity could come from any source, including ultra-low-emission sources such as solar, wind and hydroelectric energy.

Inside an electrolyzer, the reaction typically takes place on the surface of an electrode, where electrons from the circuit interface with the chemical reactants in a liquid solution. That means that the rate of the reaction is limited by how quickly the reactants and products can diffuse to and from the electrode surface.

“It’s like a traffic jam,” explains Yanwei Lum, the other co-lead author of the study who is now a research scientist at the Agency for Science, Technology and Research (A*STAR) in Singapore. “If we pump in positive charges too quickly, without enough ethylene diffusing in to absorb them, we can get over-oxidation. This is the same challenge found in the traditional reactors – some of the ethylene combusts all the way to CO2.”

To overcome this challenge, the team used chloride ions in their system as a positive charge mediator.

In their system, chloride transports positive charges away from the electrode surface into the solution, where they mediate the overall conversion of ethylene and water to produce ethylene oxide and hydrogen.

This innovation enabled them to achieve high product specificity: About 97 per cent of the ethylene that undergoes conversion in the reactor is transformed into ethylene oxide – all at room temperature and pressure, and without detectable CO2 emissions.

The Faradaic efficiency of the system (the proportion of electrical current that goes into making the desired product) was measured at 70 per cent and was shown to remain stable for more than 100 hours.

They also built a proof-of-concept reactor in which ethylene generated from CO2 using the team’s previous method was taken all the way to ethylene oxide.

There is still more work to be done before companies can start building electrochemical plants to replace the long-established thermochemical ones. But Sargent says that the ability to move higher up the chemical value chain is a big step forward.

“The bottom line is that we’re producing a product with greater market value without having to put a proportionate amount of extra energy in,” he says. “That’s very exciting in terms of being able to produce more renewable chemicals.”