U of T researchers reveal what fish do under the ice during long, cold winter months 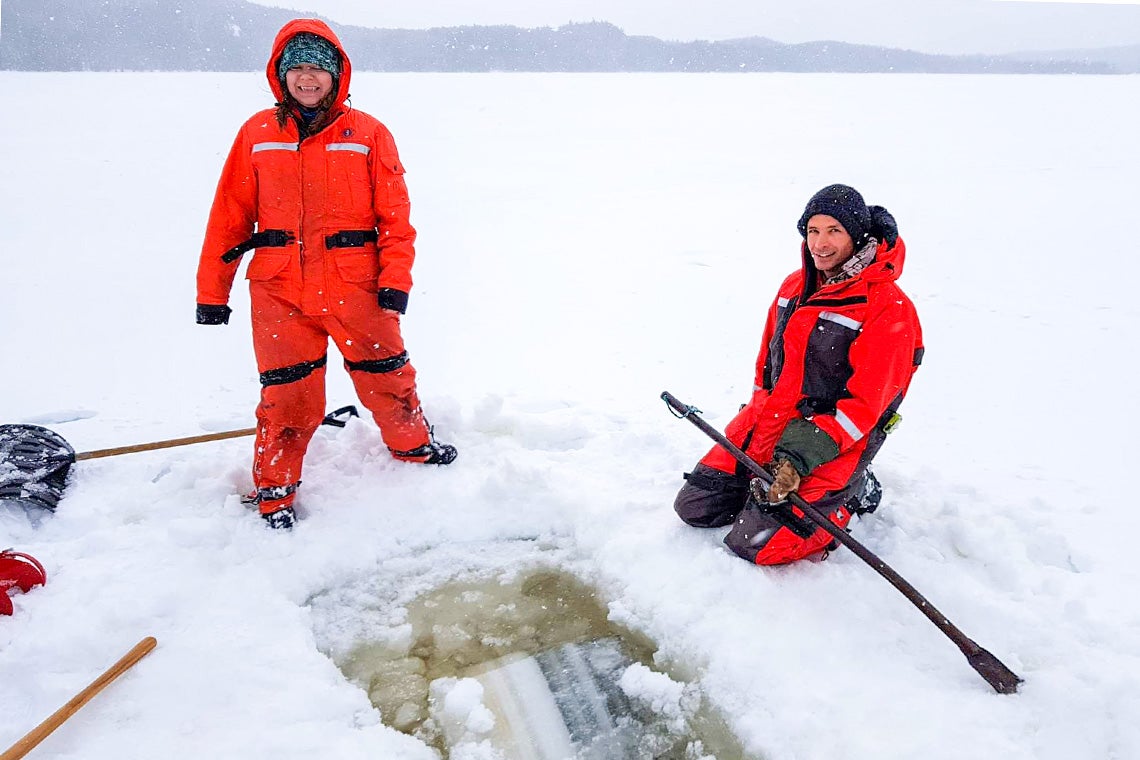 Ever wondered how fish spend the winter? Using new technology, researchers from the University of Toronto Mississauga have taken a peek beneath the winter ice to reveal surprising new information about aquatic environments in winter.

"It was a 'Eureka!' moment," says Bailey McMeans, an assistant professor of biology, of the data that confirmed lake trout were moving into the territory of other fish over the winter months.

McMeans is an aquatic ecologist studying freshwater fish at the Harkness Laboratory of Fisheries Research on Lake Opeongo in Ontario’s Algonquin Provincial Park. New research from her lab, co-authored with PhD student Timothy Fernandes, reveals for the first time that fish behaviour in winter is radically different from that observed during the summer months. 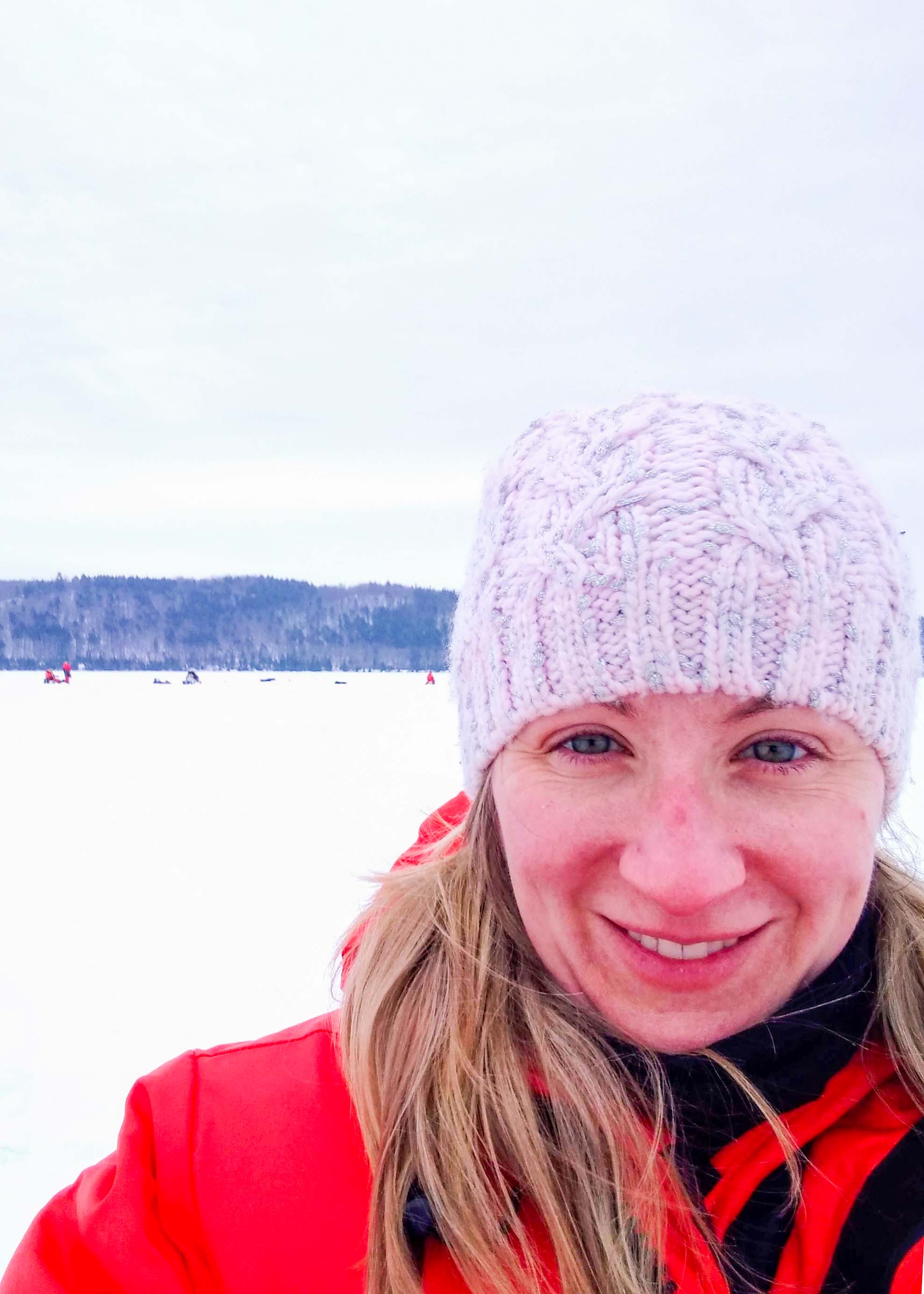 “So much of what we think we know about lakes is completely different when we go back and look in winter,” says McMeans (left). “This data fills in the story for the rest of the year, and tells us that winter periods of reduced temperature and light could play an underappreciated and unrecognized role in species interactions and coexistence.”

Winter conditions like temperature, snow and ice cover present a challenge to researchers so, until now, aquatic biologists have relied on reports from recreational ice anglers to determine where fish were biting in winter months.

“The fish we study – lake trout, smallmouth bass, burbot and walleye – tend to be the top predators,” McMeans says. “They’re important for recreational fisheries, and also culturally significant to the Indigenous community.”

“There’s a huge diversity of thermal preferences in that fish community,” she adds. In the summer months, smallmouth bass prefer shallow, warm water, while lake trout stay in the deeper, cooler areas of the lake. Sticking to their preferred and separate environments means the fish aren’t competing for the same food sources.

Researchers tracked the winter movements of tagged fish using acoustic receivers stationed on the lake bottom. The fish tags ping the receivers every few seconds, giving the researchers constant information about the location and depth of the fish and how fast they are moving around the lake.

McMeans, who has been tracking the fish for two years, says she experienced a breakthrough when she looked at the results. The data revealed that when the winter lake temperature dipped to between 0 C and 4 C, the lake trout moved to shallow water where the smallmouth bass were and stayed there all winter.

“The data showed us that, in winter, these off-shore fish become in-shore fish,” says McMeans. “We think lake trout are following temperature. In doing that, it’s bringing them in much closer proximity to bass, which they are typically separate from.”

The results also revealed another difference previously unknown to researchers. While the lake trout remain active throughout the winter, the bass enter a state of semi-hibernation, slowing their swimming and eating activity. As a result, the two species aren’t competing for food even though they are occupying the same area. “It’s something we had thought was happening, but never had the data,” McMeans says. 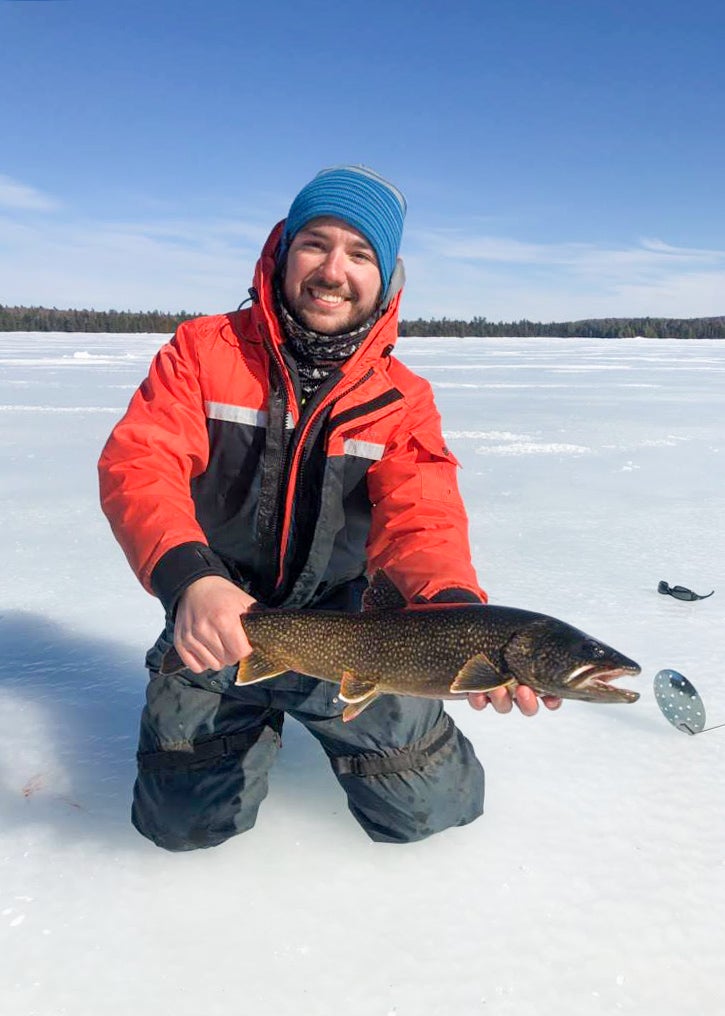 “The data shows fundamental changes in species behaviour and interactions. The two species were not thought to interact very much, but we are seeing an increase in their overlap during the winter months. That’s really exciting.”

“This information could inform more effective management of these important fish,” McMeans says. “They are already facing stressors through warmer temperatures and shorter winters. If we can shed light on how the biological interactions are changing, it will put us in a better position for predicting and managing these systems in the face of climate change.”

The study, which appears in bioRxiV, receieved support from the Natural Sciences and Engineering Research Council, among others.

Inset photo: Study co-author Tim Fernandes, a PhD student at U of T Mississauga, researches how lake trout and other fish behave in winter