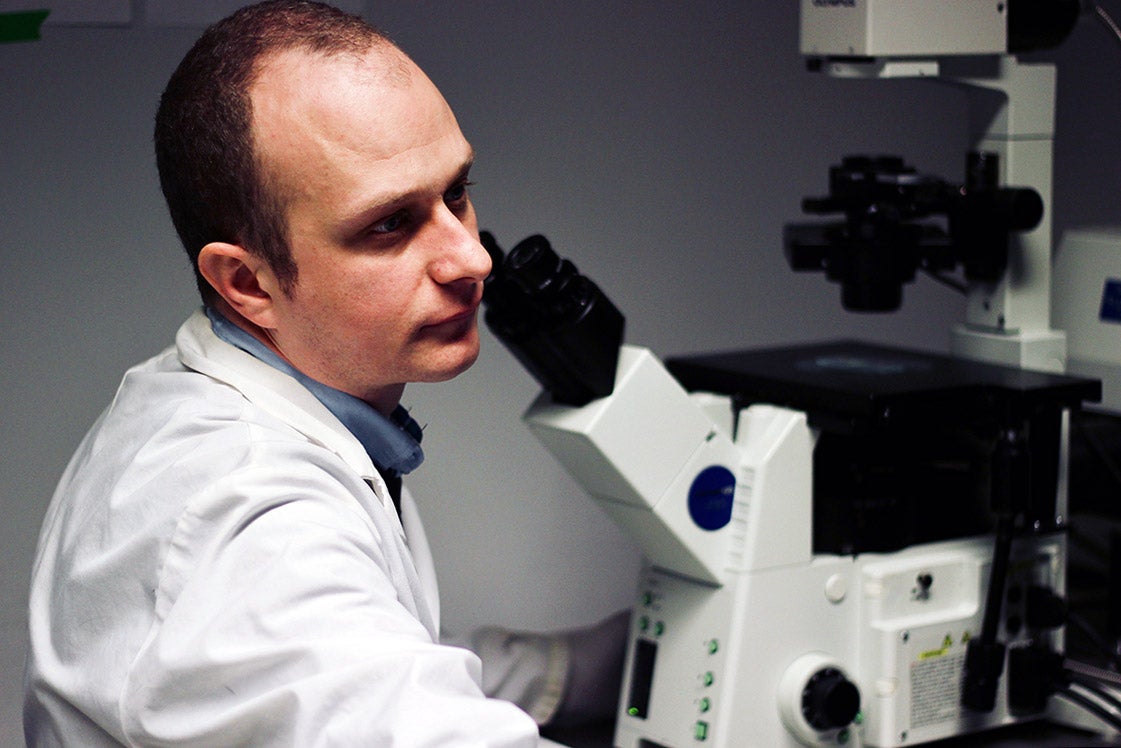 By studying worms, PhD student Daniel Merritt aims to uncover the cells and molecules behind learning and memory (photo by Jovana Drinjakovic)

Try as you might, some events cannot be remembered. Known in psychology as memory blocking, the phenomenon has remained elusive since first described more than half a century ago. Now, University of Toronto researchers have found that blocking is not due to problems with forming memories, as previously thought, but with memory recall – in worms at least.

By studying this process in the C. elegans worm, a creature only one millimetre long but whose biology has been studied so extensively that the position of all of its 302 nerve cells in the body is known, the researchers think they’ll be able to pinpoint the cells and molecules at play during learning and memory.

The findings are described in a study published in the journal Scientific Reports.

Memory blocking, also known as Kamin blocking, was first described in rats in the 1960s by the psychologist Leon Kamin at McMaster University. It occurs when an animal that has already learned to respond to a cue – a sound, for example – cannot learn to respond to another cue when it is presented at the same time as the learned sound.

“Suppose you grew up hearing ice cream trucks playing a song and hearing that song, even when you can’t see the truck, makes you think of ice cream,” explains Daniel Merritt, who led the study as part of his doctoral research in the group of Derek van der Kooy, a professor in the Donnelly Centre for Cellular and Molecular Research and U of T’s department of molecular genetics.

Kamin blocking is thought to be a key way in which humans learn by focusing on novelty. It led to a well-established idea that to learn about an experience, it has to carry with it an element of surprise. Problems with blocking are pronounced in people with schizophrenia, which is thought to decrease selectivity in attention.

The process, however, has been difficult to study in granular detail in the mammalian brain due to its complexity and lack of molecular tools.

“Being able to fully describe the molecular changes that are going on in memory is enormously appealing, but human memory is too ephemeral and nebulous to pin it down,” says Merritt. “But by studying it in worms, we are really making a lot of headway in figuring out exactly what is going on when memories are formed and retrieved in a molecule by molecule fashion.”

This is thanks to a vast genetic and molecular toolbox that are available to researchers working with C. elegans. But first, Merritt had to establish that memory blocking occurs in worms, which has not been studied before.

To do this, he trained the worms to associate hunger with either the taste of salt or the smell of benzaldehyde, which gives almonds that whiff of sweetness. Unlike untrained worms, which find both substances attractive, trained worms develop a strong dislike for them and crawl away.

Next, Merritt gave the benzaldehyde-trained worms benzaldehyde together with salt. When he then exposed the worms to salt alone, they still crawled toward it. The same was true when salt-trained worms experienced salt together with benzaldehyde – they continued to like almond smell. Whichever cue came second, and in conjunction with the first one, was blocked, similar to what happens in rats and humans.

To probe deeper into how blocking works, Merritt repeated the experiment with worms expressing a protein called EGL-4 that was labelled with a green fluorescent molecule to make it visible.

The EGL-4 protein is present in a single olfactory nerve cell in the worm’s head and its movement inside that cell is required for benzaldehyde starvation learning. To Merritt’s surprise, the protein shifted its position during benzaldehyde blocking the same way it did during normal learning. This suggests that the memory of disliking benzaldehyde had formed but could not be retrieved – the worm forgot about it.

“This is interesting because it contradicts the classic interpretation of blocking where you need an element of surprise or you don’t bother remembering the second association,” says Merritt. “Our data shows that the memory is formed but it’s the expression of behaviour that’s suppressed somehow.”

The effect of blocking lasts about four hours. What goes on in the mind of the worm during that time?

“That’s the big question,” says Merritt, who is now working to uncover parts of the worm brain that help integrate salt and benzaldehyde learning responses. “I’ll let you know in four years’ time when I’m done with my PhD.”

Funding for the project was provided by the National Science and Engineering Research Council.