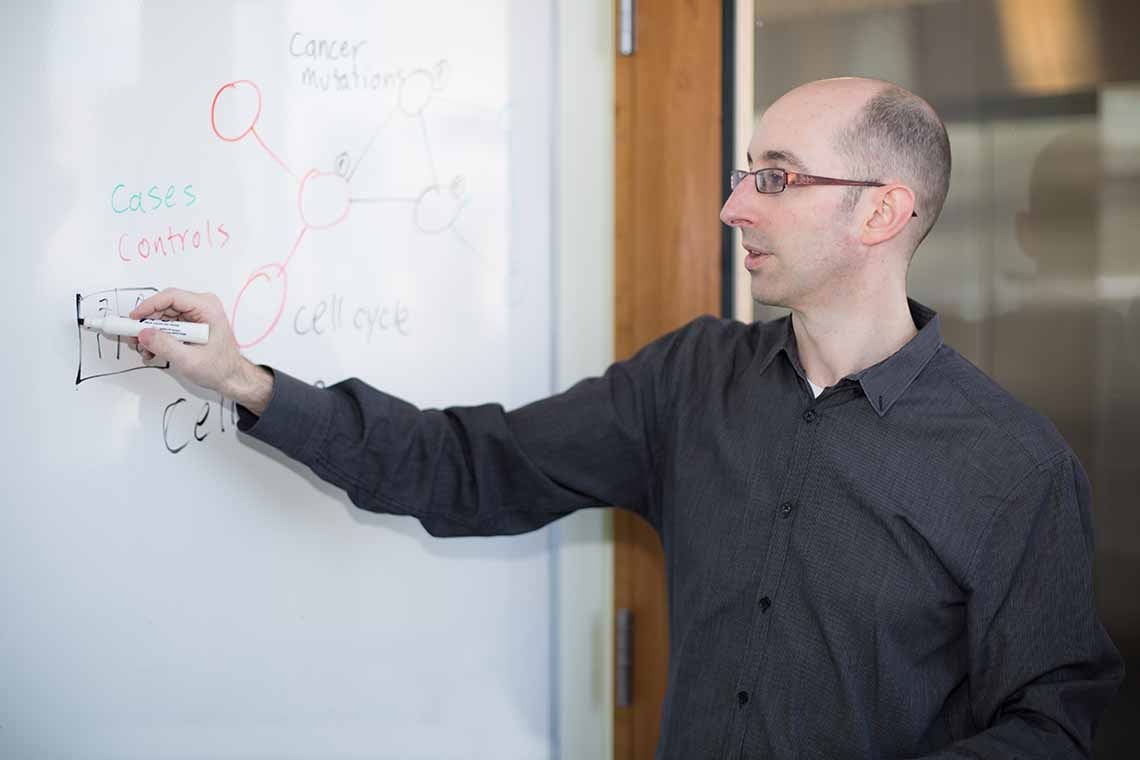 Professor Gary Bader: “These new variants substantially expand the number of genes and pathways that are involved in breast cancer development” (photo courtesy of Canadian Foundation for Innovation)

University of Toronto researchers have helped identify 72 new genetic variants that contribute to the risk of developing breast cancer as part of a major international collaboration involving hundreds of researchers worldwide.

The studies, reported today in the journals Nature and Nature Genetics, identified 72 common variants that predispose to breast cancer. Among these genetic regions, some are specifically associated with either estrogen receptor-positive (ER+) or estrogen receptor-negative (ER-) breast cancer – the subset of cases that do not respond to hormonal therapies, such as the drug tamoxifen.

The findings are the result of work by the OncoArray Consortium, a huge endeavour involving 550 researchers from about 300 different institutions in six continents. In total, they analyzed genetic data from 275,000 women, of whom 146,000 had been diagnosed with breast cancer.

“These new variants substantially expand the number of genes and pathways that are involved in breast cancer development, and these represent multiple new avenues of research to learn how to treat breast cancer,” says Gary Bader, a professor at the Donnelly Centre for Cellular and Biomolecular Research and the department of molecular genetics, whose research group was among five U of T teams involved in the study.

Bader’s group was instrumental in identifying new pathways involved in breast cancer and making the discovery that ER+ and ER- breast cancers are linked to different pathways, supporting the idea that these cancers are genetically distinct diseases and therefore need to be thought of differently by researchers.

Breast cancer is caused by complex interactions between a large number of genetic variants and the environment. The inherited component of breast cancer risk is due to a combination of rare variants in genes such as BRCA1 and BRCA2 that confer a high risk of the disease, and many more common genetic variants that each confers only a small risk. The newly identified risk regions nearly double the numbers that are already known, thereby bringing the number of known common variants associated with breast cancer to around 180.

The risk variants identified in the two studies are common: While some are carried by one woman in 100, others are carried by more than half of all women. Individually, the risks conferred by each variant are modest. But because they are common and their effects multiply together, the combined effect is considerable. These findings will help improve risk prediction. The researchers believe these differences may be sufficient to change practice, such as in how women at different risks are screened.

Read the studies in Nature and Nature Genetics

“Using data from genomic studies, combined with information on other known risk factors, will allow better breast cancer risk assessment, therefore helping to identify a small but meaningful proportion of women at high risk of breast cancer,” says Professor Jacques Simard from the Genomic Centre of the CHU de Québec-Université Laval Research Centre in Québec City, who was one of the co-leading investigators on the project.

“These women may benefit from more intensive screening, starting at a younger age, or can be offered screening by magnetic resonance imaging (MRI), which is more sensitive, allowing early detection and prevention of the disease. At the same time, this personalized information will also be useful to adapt screening modalities for women at substantially lower risk,” says Simard.

The major advance of the study was that a large amount of genomic information was used to better link genetic variants to the genes they act on. Identified as single misspellings in the DNA code, variants are scattered across the genome and often fall outside the gene-coding regions. To find a gene that is affected by any given variant, researchers would typically home in on a gene that is located closest to the variant – a difficult task when there are many genes to choose from, as is often the case.

But here, data about transcription factor binding – proteins that bind the DNA at specific sites to switch genes on and off – as well as epigenetics data that tell researchers how accessible DNA is to transcription factors, were taken into account to better predict which gene should be linked to which breast cancer-associated variant.

Despite this leap in our understanding of the genetic risks of breast cancer, Bader says that the data still can’t explain most of breast cancer cases and are not yet widely useful for population screening. The current study looked at common variants and to explain more of breast cancer risk, researchers will need to consider rare mutations as well as how different genes interact to influence each other’s effect on disease.