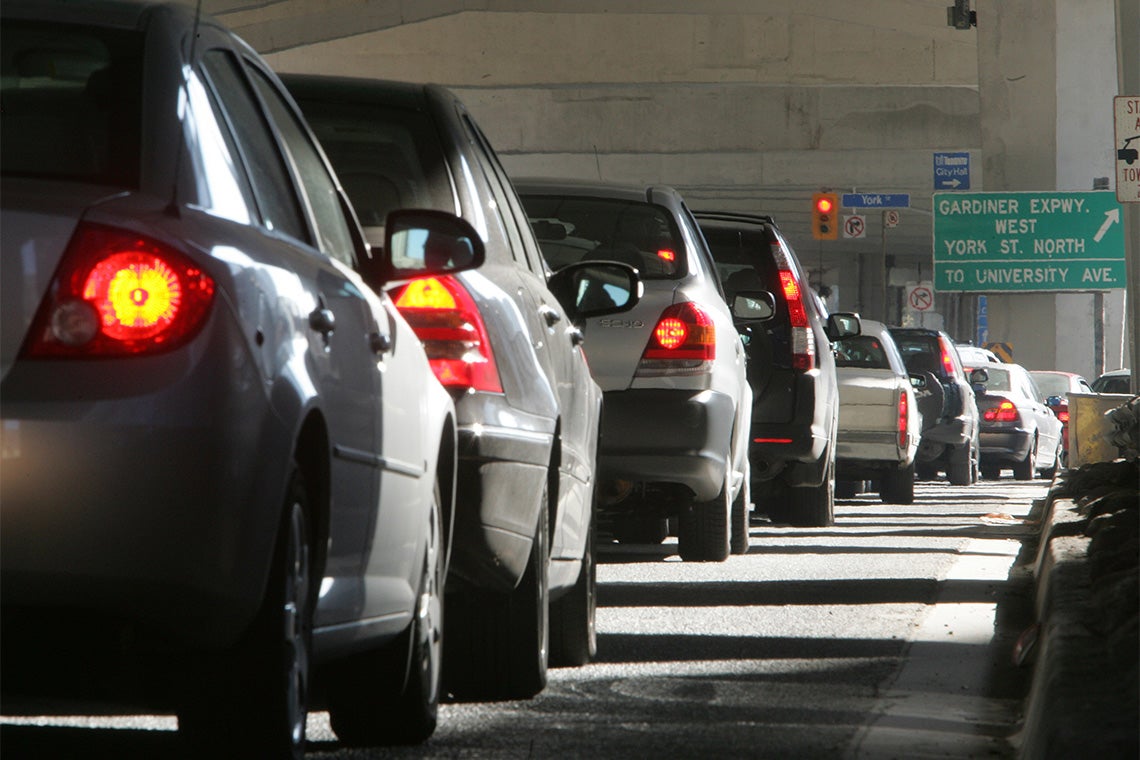 The researchers created computer simulations for a number of different scenarios, including replacing all cars and SUVs in the Greater Toronto and Hamilton Area with electric ones (photo by Steve Russell/Toronto Star via Getty Images)

Electric vehicles are often touted as a means of mitigating climate change, but a new University of Toronto model suggests that their public health benefits may be just as significant.

“Local air pollution within urban environments is highly detrimental to human health,” says Marianne Hatzopoulou, an associate professor in the department of civil and mineral engineering in the Faculty of Applied Science & Engineering who led the research.

“When you have an electric vehicle with no tailpipe emissions, you’re removing a wide range of contaminants – from nitrogen oxides to fine particulate matter – from the near-road environment and shifting them to power plants. The net effect remains a large improvement in air quality.” Marianne Hatzopoulou and her team have modelled the potential human health impacts of a large-scale shift to electric vehicles across the Greater Toronto Hamilton Area (photo: Roberta Baker)

Health Canada estimates that 14,600 premature deaths per year can be attributed to air pollution, with more than 3,000 of these in the Greater Toronto Hamilton Area (GTHA). Hatzopoulou and her team set out to model how that might change under a significant shift from internal combustion vehicles to electric ones.

The researchers created computer simulations for a number of different scenarios, such as replacing 20 per cent, 50 per cent or 100 per cent of cars and SUVs in the GTHA with electric ones. They also modelled the effect of switching transit buses over to electric buses and of replacing all transport trucks with newer models that produce less emissions.

The simulations accounted for the fact that electric vehicles, which don’t produce any emissions themselves, put an increased demand on electricity plants. In other words, if the plants in question burn fossil fuels, they could contribute increased local emissions, which the team included in their model.

“We can simulate the air quality down to areas as small as one square kilometre, so even if the overall effect is positive, we can see if there are local winners and losers,” says Hatzopoulou. “We also accounted for air pollution drifting over [the border] from upstate New York and the American Midwest, which we often can detect here in Toronto.”

For each scenario, the team calculated the predicted reduction in emissions for various air pollutants. Using epidemiological data on pollutant exposures, they then estimated the reduction in premature deaths that would be observed in each scenario.

Finally, using an economic measure known as the Value of Statistical Life (VSL), they converted the reduction in deaths into a dollar figure as a way of quantifying the social benefit of the change.

Among the model’s predictions were:

“I was surprised just how strong the effect was,” says Hatzopoulou. “If you bring it down to an individual level, each electric vehicle replacing a gas-powered one brings nearly $10,000 in social benefits. Those benefits are shared by everyone – not just the people buying the cars.”

The work was published recently in a report co-authored by Environmental Defence, an advocacy group, and the Ontario Public Health Association. The analysis relating to transport trucks, which included contributions from U of T Engineering researchers Matthew Roorda and Daniel Posen and their teams, was published last month in the journal Environmental Research.

Next, Hatzopoulou and her team plan to use their model to study the effects of other changes, such as reducing the overall number of cars on the road by encouraging public transit or active transportation.

“Electric vehicles are great, but with even millions of them on the road, we would still have issues such as traffic congestion,” she says. “If we want to address the climate crisis, we’re going to need behavioural modifications as well.”

“One of the things we’ve learned during this COVID-19 pandemic is that it might not be critical for everyone to commute to work every day. We would like to quantify the benefits – both for the environment and for our own health – of making those kinds of changes.”