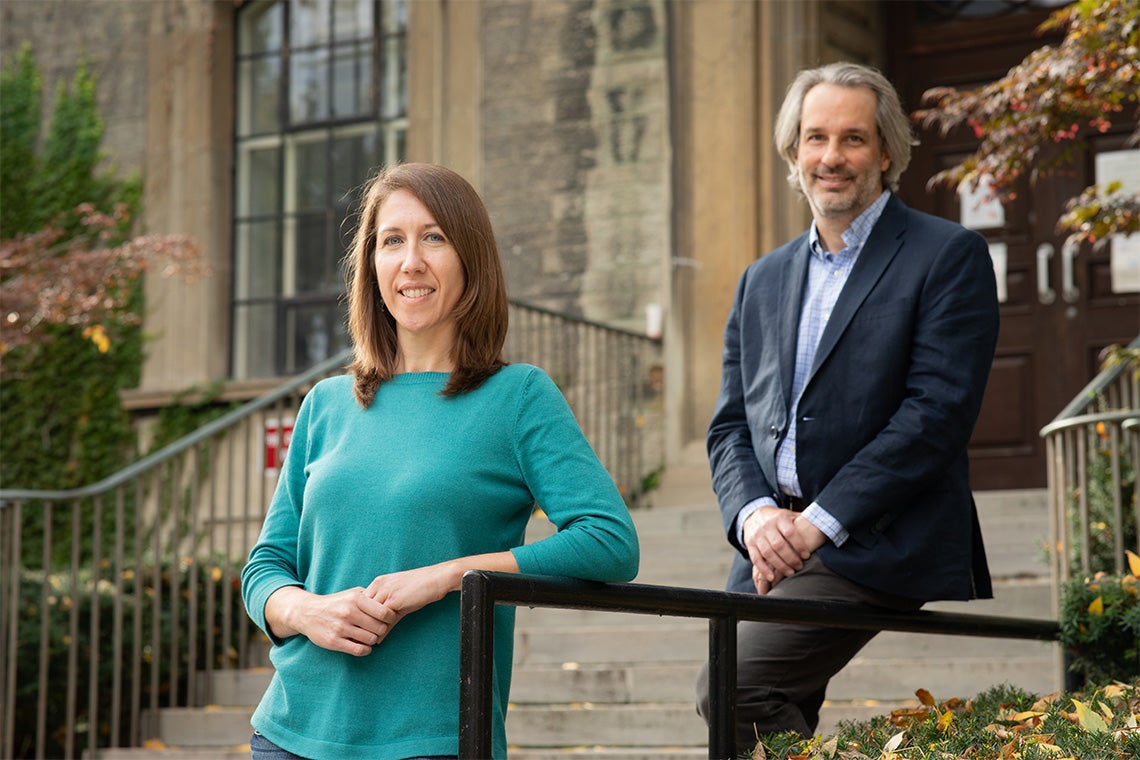 Inside a Petri dish in a lab at the University of Toronto is a muscle – made from scratch using human stem cells – that has Duchenne muscular dystrophy (DMD).

To study the biological properties of DMD, a degenerative muscle disorder that mainly affects males, U of T researchers obtained cell lines from people living with the condition and used them to create miniature muscles in a dish. Now, they’re helping other researchers and industry partners develop and test new treatments that may help the boys and young men who are afflicted with DMD.

The research team is led by Bryan Stewart, professor of biology at U of T Mississauga, and Penney Gilbert, associate professor in the Institute of Biomedical Engineering and at U of T’s Donnelly Centre for Cellular & Biomolecular Research. Stewart specializes in the physiology of neurons and muscles. Gilbert, a cell biologist, specializes in restoring skeletal muscle (the muscles attached to bone) by using stem cells. They decided to collaborate after meeting at a research leadership workshop organized by University Professor Molly Shoichet about six years ago.

“We learned we were both studying skeletal muscle,” says Gilbert. “Bryan’s lab was using fruit flies to understand the muscle-nerve connection, which enables the brain to tell, for example, our arm to move.

“My lab was creating human tissue to make models of the muscle-nerve connection.  Together, we realized our unique tools and methods could enable us to look at DMD in a different way from, literally, any group in the world.”

DMD is caused by a gene mutation that prevents the body from producing dystrophin, the protein that enables muscles to function. It is a rare condition – occurring in one out of 3,500 to 5,000 male children worldwide – but it is devastating. Starting around age five, DMD progressively damages and weakens the muscles, including the heart. Most children with DMD will have to use a wheelchair. And most will die before they reach 30.

Gilbert says the biomedical innovation of creating muscle “means that for the first time ever it is actually possible to study DMD and the nerve-muscle connection outside of the body.

The team is working to make its 3D muscle models more representative of what is actually found in humans.  They are especially paying attention to the variation in muscle structure and function that can exist in people who have DMD.  Gilbert and Stewart note the expertise brought to the work by post-doctoral researchers Christine Nguyen and Majid Ebrahimi.

Stewart emphasizes that while the team is not directly creating drugs or therapies, their work will be an important foundational system for other researchers to use in developing pharmaceutical treatments or for testing the gene therapy experiments that will soon move to clinical trials.

“The DMD pre-clinical assays being developed by Gilbert and Stewart are a critical facet of the translational pipeline, making it possible to test current and future therapeutics in the context of human cells,” says Rudnicki, senior scientist and director of the regenerative medicine program and Sprott Centre for Stem Cell Research at the Ottawa Hospital Research Institute.

“There is a wealth of great work being done on DMD around the world,” says Stewart.  “Penney and I knew when we met at that workshop that there could be a lot of power in merging our two groups.

“I think we are at a point where we can help to launch a new surge in testing and discovery that will begin to benefit the people and families living with DMD.”

A century after the discovery of insulin, U of T and its hospital and industry partners have built a culture of discovery, innovation and collaboration that has transformed health care and continues to have a ripple effect worldwide. This article is part of a series featuring researchers working on medical and health innovations for the future.