U of T researchers, innovators to pitch ideas for Ontario's growth at annual economic summit 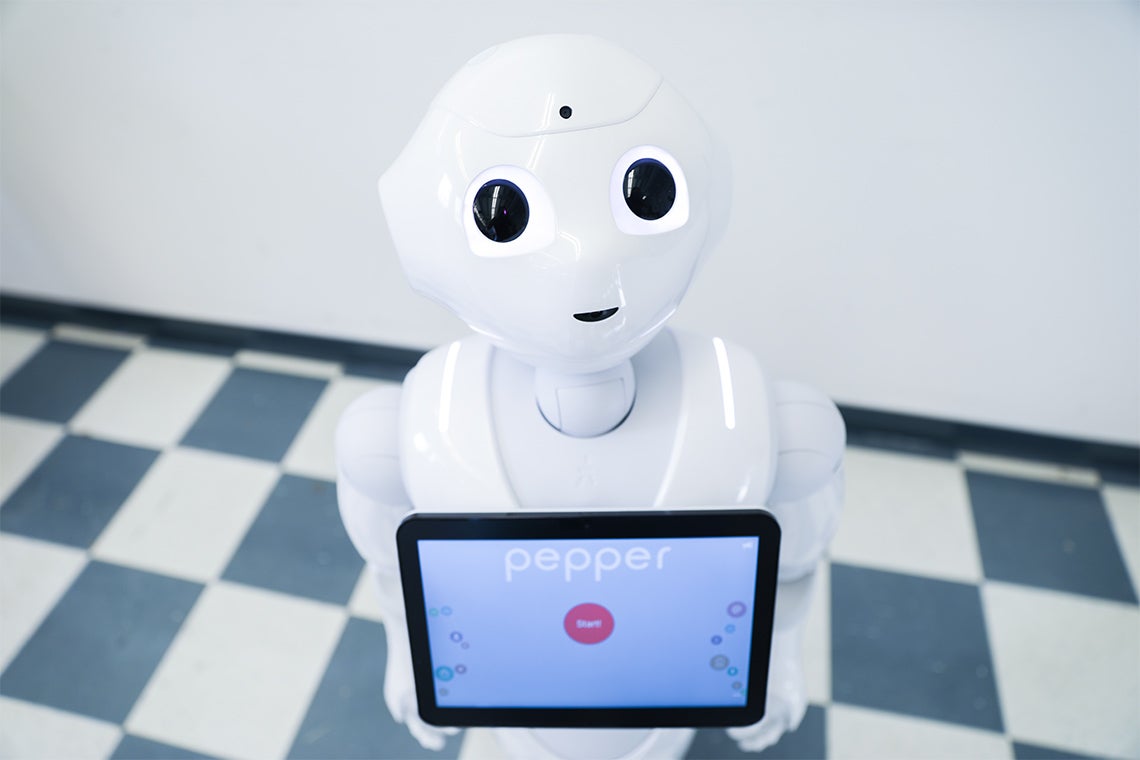 Pepper, a socially assistive robot developed in the lab of U of T's Goldie Nejat, is designed to detect and respond to human voices and gestures (photo by Liz Do)

When it comes to using robots to help the elderly, the future is almost here.

That’s according to University of Toronto robotics expert Goldie Nejat, who says we’re only a few years away from deploying robots in long-term care facilities to help residents everyday tasks, exercise and cognitive stimulation.

Her long-term vision is to design robots that can assist with an array of tasks to improve seniors’ quality of life, alleviate some of the burden on their caregivers and family members – and, ultimately, contribute to the expansion of the Ontario economy.

“Health-care robotics is growing substantially, and U of T is at the cutting edge of designing these robots,” says Nejat, an associate professor in the department of mechanical and industrial engineering in the Faculty of Applied Science & Engineering.

“We’re training the next generation of skilled researchers and entrepreneurs to develop this technology and integrate it into our health-care system to assist people who need the care.”

On Wednesday, Nejat, who holds a Canada Research Chair in Robots for Society, will be one of four presenters pitching their ideas to the audience at the Ontario Economic Summit. The annual event is organized by the Ontario Chamber of Commerce and brings together industry representatives, experts and government officials to talk about the province’s economy. The theme for this year’s edition – taking place at the Beanfield Centre at Toronto’s Exhibition Place – is competitiveness. Premier Doug Ford and Mayor John Tory, a U of T alumnus, are scheduled to attend. 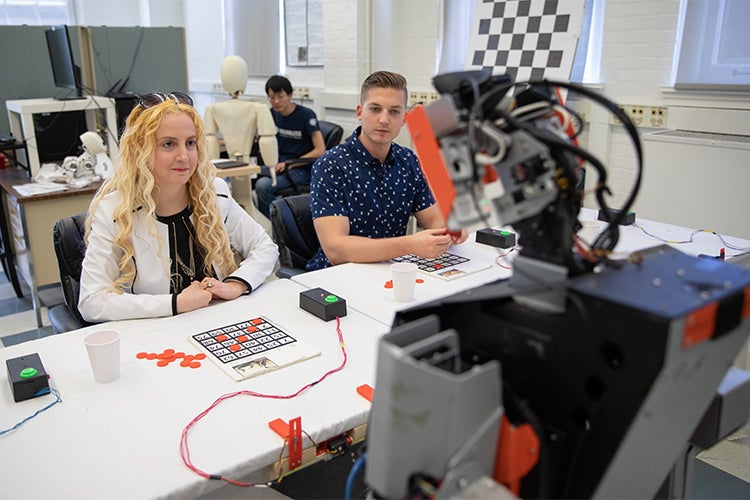 Goldie Nejat and a student interact with a socially assistive robot named Tangy, which is designed to facilitate recreational activities and promote social interaction among people with degenerative cognitive conditions such as dementia (photo by Laura Pedersen)

Nejat and three other members of the U of T community will take part in a session titled “The Next Big Idea.” Each will each present a pitch for how a hypothetical public investment of $100 million in their respective sectors could be utilized to drive competitiveness and economic growth in the province.

Nejat will discuss how socially assistive robots can help adults living with dementia as well as health-care workers; Hani Naguib, a professor in the department of mechanical and industrial engineering and director of the Toronto Institute for Advanced Manufacturing, will discuss how advanced manufacturing and smart materials can usher in a revolutionary transformation for factories and industry; Anne Koven, an adjunct professor in the forestry program at the John H. Daniels Faculty of Architecture, Landscape, and Design and executive director of the Mass Timber Institute, will talk about how mass timber and tall wood construction can sustain a mutually beneficial relationship between the forestry industry and thriving urban markets; and Allen Lau, a U of T alumnus and the founder and CEO of data-driven publishing platform Wattpad, will talk about how to nurture Ontario’s tech ecosystem into a global powerhouse.

The session will be moderated by Christine Allen, U of T’s associate vice-president and vice-provost, strategic initiatives, and a professor in the Leslie Dan Faculty of Pharmacy.

"The Ontario Economic Summit represents an incredible opportunity to strengthen dialogue between academia, industry and government on how we can all work together for the betterment of our province,” says Allen, who is also the co-founder of medical nanotechnology startup Nanovista.

"I'm delighted that the audience will have the opportunity to learn about how the university’s research and talent are leading the way in the development and application of some of the most revolutionary technologies of our time – innovations that are improving Canadians’ lives and contributing to the economic health of the province.”

One of the session's participants is likely to stand out in the crowd, according to Nejat.

“We’re going to take one of our robots and have a demonstration where it engages people to do a few exercise sessions with it,” she says.

That’s a capability that Nejat and her team are also preparing to test in a two-month study that will see the robot lead residents of a long-term care facility through physiotherapist-approved exercises.

“We’ll assess residents’ acceptance of the robot ... and any other feedback during the interaction,” says Nejat.

Nejat’s robots have already spent time in long-term care facilities, where residents, family members, caregivers and administrators have been given the chance to have “meet-and-greet” sessions with them.

“It’s interesting to see how naturally people interact with social robots. They talk to the robot in a similar way that they talk to people. They respond to it, they’re engaged,” says Nejat. “This shows the capabilities and potential of the technology.”

“Dementia is a worldwide epidemic for which there’s no cure, so it’s important for us to look at using technology to help us live with a certain quality of life as we age and our population demographics change,” she says. “It’s important for older adults to be healthy as they age, be active and take part in social interactions. There’s a lot of potential for robots to support their everyday lives in this way.”

Nejat says U of T’s prowess in robotics and related technologies like AI, as well as Toronto’s bustling innovation and startup ecosystem, makes it the perfect place in which to grow the sector.

“In addition to improving people’s lives, this sector can spur job creation through startups and spin-off companies, as well as the entry of established robotics companies. My pitch at the Ontario Economic Summit will centre on how robotics can help with everyday life, support us as we age and contribute to job creation and economic prosperity in the province.”