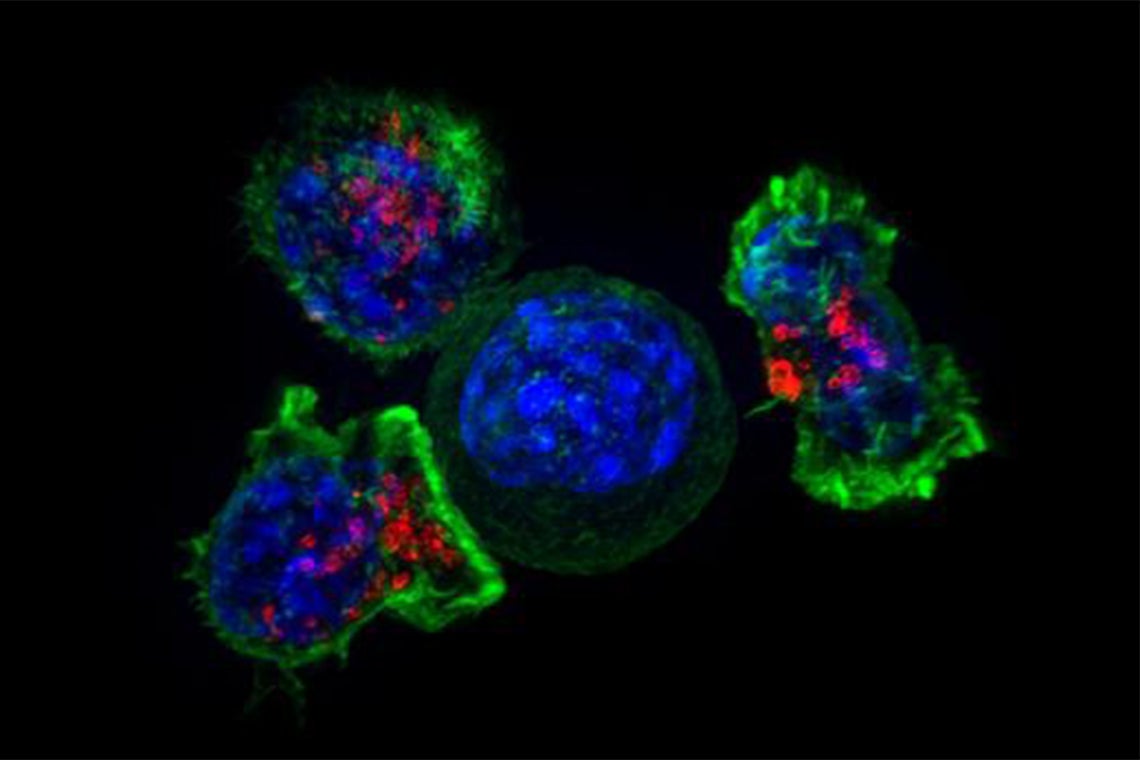 Researchers at the University of Toronto have mapped the genes that allow cancer cells to avoid being killed by the immune system – a finding that paves the way for the development of immunotherapies that could be effective for large patient populations and across different tumour types.

“Over the last decade, different forms of immunotherapy have emerged as really potent cancer treatments, but the reality is that they only generate durable responses in a fraction of patients and not for all tumour types,” says Jason Moffat, a professor of molecular genetics at the Donnelly Centre for Cellular and Biomolecular Research who led the work.

The study, published in Nature, also revealed the need for new therapy to take into account the genetic composition of tumours because of mutations in the cancer cells that can potentially make the disease worse in response to treatment, often referred to as “cancer resistance mutations.”

“It’s very important to understand at the molecular level how cancer develops resistance to immunotherapies in order to make them more broadly available,” says Moffat, who holds a Canada Research Chair in Functional Genomics of Cancer. “Advances in systematic genetic approaches have let us key in on genes and molecular pathways that are commonly involved in resistance to therapy.”

In immunotherapy, a patient’s own immune cells, known as T killer cells, are engineered to find and destroy cancer. But treatment resistance has precluded its use in most patients, especially those with solid tumours.

“It’s an ongoing battle between the immune system and cancer, where the immune system is trying to find and kill the cancer whereas the cancer’s job is to evade that killing,” says Keith Lawson, a co-lead author who is completing a PhD in Moffat’s lab as part of his medical training in the surgeon-scientist program at U of T’s Faculty of Medicine.

Tumour heterogeneity – genetic variation in tumour cells within and across individuals that can impact therapy response – further complicates treatment.

“It’s important to not just find genes that can regulate immune evasion in one model of cancer, but what you really want are to find those genes that you can manipulate in cancer cells across many models because those are going to make the best therapeutic targets,” Lawson says.

The team, including collaborators from Agios Pharmaceuticals in Cambridge, Mass., looked for genes that regulate immune evasion across six genetically diverse tumor models derived from breast, colon, kidney and skin cancer. The cancer cells were placed in a dish alongside the T cells engineered to kill them, where the ensuing onslaught served as a baseline. The researchers next deployed the gene editing tool CRISPR to switch off one-by-one every gene in the cancer cells and measured the resulting deviations from the killing baseline.

They identified 182 “core cancer intrinsic immune evasion genes” whose deletion makes the cancer cells either more sensitive or more resistant to T cell attack. Among the resisters were all the genes known to develop mutations in patients who stopped responding to immunotherapy, giving the researchers confidence that their approach worked.

Many of the discovered genes had no previous links to immune evasion.

“That was really exciting to see, because it means that our dataset was very rich in new biological information,” Lawson says.

Genes involved in autophagy, a process when cells ramp up recycling their components to mitigate damage following stress, came up as key for immune evasion. This raises the possibility that cancer’s susceptibility to immunotherapy could be boosted by targeting its autophagy genes.

But as the researchers delved deeper, they found that deleting certain autophagy genes in pairs rendered the cells resistant to T cell killing. That means that if a tumour already harbours a mutation in one autophagy gene, a treatment that combines immunotherapy with a drug targeting another autophagy gene could make the disease worse in that patient.

“We found this complete inversion of gene dependency,” says Moffat. “We did not anticipate this at all. What it shows us is that genetic context – what mutations are present – very much dictates whether the introduction of the second mutation will cause no effect, resistance or sensitivity to therapy.”

As more research explores combinatorial effects of mutations across different types of cancer cells, it should become possible to predict from a tumour’s DNA what type of therapy will be most effective.

The research was funded by the Canadian Institutes of Health Research, the Ontario Institute for Cancer Research and Agios Pharmaceuticals.