U of T researchers to harness quantum properties of light for biomedical imaging, security and more 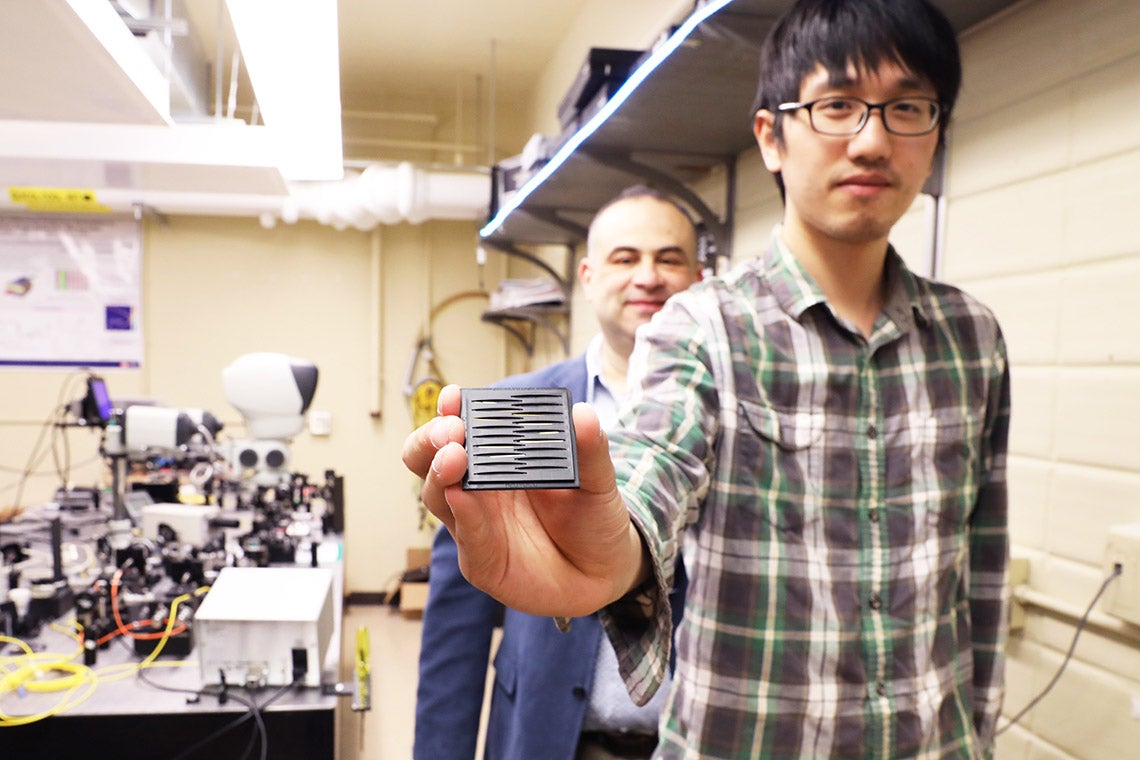 Shine a regular flashlight at thick fog and you won’t see much more than a grey blur. Yet that reflected light still contains useful information – it’s just coded in the form of quantum data.

Researchers at the University of Toronto’s Faculty of Applied Science & Engineering are designing portable, lightweight sensors that could access this information, enabling them to cut through the noise and “see” things that are currently invisible.

“Quantum imaging modalities are no longer a physics experiment,” says Amr Helmy, a professor in the department of electrical and computer engineering. “This is something you could one day hold in your hand.”

Current light sensors, such as those found in smartphones, can detect the wavelengths or colours of the light that hits them, as well as its intensity. When two or more sensors are combined, software can be used to determine the direction from which the light came, in much the same way that our two eyes enable us to perceive distance.

But quantum sensors could access additional information encoded in the photons they detect that lead to a much richer picture of the object in question.

One benefit of accessing quantum information encoded in light is the ability to cut through what Helmy calls “turbid media,” such as fog or scattered light. In these conditions, traditional sensors become overwhelmed. By contrast, quantum sensors could focus in on only the most relevant forms of information, tuning out the ambient “noise.”

Helmy and his team were recently awarded research funding from Canada’s department of national defence (DND), as part of its All Domain Situational Awareness (ADSA) initiative. Helmy’s project will focus on prototyping integrated quantum-imaging techniques for drone detection.

His lab’s work is timely: Drones have been spotted flying dangerously close to airport runways over the past year. The security breaches have led to flight cancellations and chaotic scenes at airports. Because drones are too small to be detected by traditional radar, capturing them – and their operators – has proven to be notoriously difficult.

“If an imaging system had the capability to generate, process and detect, using quantum light, you would be able to distinguish these drones, their size and speed with unprecedented performance,” says Helmy.

Over the next two years, Helmy and his team will be working to optimize and prototype their drone-detection system. But the technology could also enable advances in other fields, such as the biomedical sector. The ability to richly discern objects despite significant environmental noise – for example, layers of tissue – could greatly enhance diagnostic tools such as MRI or CT scans, potentially enabling earlier detection and treatment of diseases.

Helmy also envisions uses for quantum imaging in the emerging field of autonomous vehicles. “Daylight sensing for pedestrians needs to be programmed differently if you’re in India, Africa or Sweden because daylight and sunsets are different depending on time of year and location,” he says. “Quantum technologies developed by our lab can help work across these domains, increasing the dynamic range.”

But if quantum light sensors are bulky, expensive or difficult to use, their adoption will ultimately be limited. To deal with this, Helmy and his team have assembled unique facilities that enable them to design, tailor, nanofabricate and package the quantum illumination technology in-house. Their prototypes typically take the form of “chips” small enough to be held in your hand.

“One of the things that is very unique about our work in quantum research is that we’re able to do this while being low-cost, portable and lightweight,” he says.

Ultimately, Helmy and his team want to demonstrate how they can harness this powerful imaging tool and apply it to today’s market-ready devices, and even make it comparable in price to non-quantum technologies.

“If you can have the same level of versatility and portability as some of today’s devices, but instead you can have along with it, the richness and power of quantum effects – imagine all of the exciting things you could do,” he says.