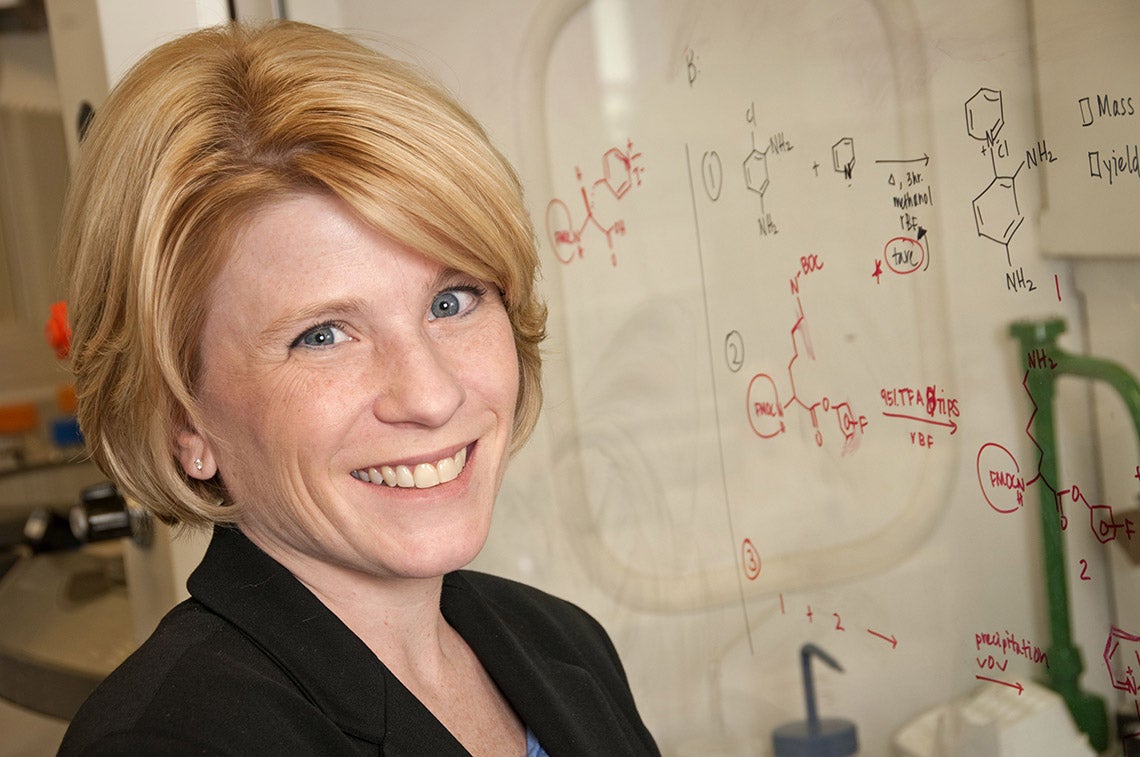 What started as a hallway conversation between colleagues is now an “engine for the discovery of new therapeutic targets in cells” thanks to Medicine by Design, says Shana Kelley, a University Professor in the Leslie Dan Faculty of Pharmacy at the University of Toronto.

Kelley’s lab was developing a portable, chip-like device that uses tiny magnets to sort large populations of mixed cell types as part of her Medicine by Design team project. She wondered if the device could be coupled with a CRISPR-based gene-editing technology developed by another Medicine by Design team leader, Jason Moffat, a professor in the Donnelly Centre for Cellular and Biomolecular Research.

They reasoned that the two methods together could speed up combing through the human genome for potential drug targets.

“We casually agreed to combine our technologies – and it worked incredibly well,” says Kelley.

“This is the advantage of being part of the dynamic research ecosystem of Toronto and Medicine by Design,” she says. “I would have never known how to position this technology and link it with CRISPR if I did not have all these great people around to talk to.”

The result of their joint effort, also in collaboration with Stephane Angers, a professor at the Leslie Dan Faculty of Pharmacy, and Ted Sargent, University Professor at the department of electrical and computer engineering, is called MICS, for microfluidic cell sorting, described in a study published Monday in the journal Nature Biomedical Engineering.

MICS will enable researchers to scour the human genome faster when searching for genes and their protein products that can be targeted by drugs.

In one hour, MICS can collect precious rare cells, in which CRISPR has revealed promising drug targets, from a large and mixed cell population. The same experiment would take 20 to 30 hours using the gold standard method of fluorescence-based sorting.

Researchers use CRISPR to switch off each of around 20,000 human genes in cells to see how this affects levels of a disease-related protein which, say, helps cancer spread. This can reveal other gene candidates, and the proteins they encode, that work in the same pathway and that could be targeted with drugs to remove the target protein and halt cancer. The caveat is that genetic screens result in mixed cell populations, with a desired effect present in a vanishingly small proportion of cells, which must be scooped out for further study. Most cell-sorting instruments use laser beams to separate fluorescently labelled cells, but this takes time.

MICS works faster thanks to tiny magnets engineered to bind to the target protein, which leaves the cells sprinkled with magnetic particles. About half the size of a credit card, its surface is streaked with strips of magnetic material that ferry the cells from one end of the device to another. Once at the far end, the cells fall into distinct collection channels based on how many particles they carry, as a proxy for the amount of the target protein. MICS is about half the size of a credit card, and can sort cells much faster than existing technologies thanks to tiny magnets engineered to bind to the target protein (photo courtesy of Kelley lab)

“As many as one billion cells can travel down this highway of magnetic guides at once and we can process that in one hour,” says Kelley.” It’s a huge game-changer for CRISPR screens.”

To test if MICS can reveal new drug targets, the researchers focused on cancer immunotherapy, in which the immune system is engineered to destroy tumour cells. They looked for a way to reduce the levels of the CD47 protein, which sends a “don’t eat me” signal to the immune system and is often hijacked by cancer cells as a way of escaping immune detection. Others have found that blocking CD47 directly has harmful side effects, prompting the Medicine by Design team to look for the genes that regulate CD47 protein levels.

A genome-wide CRISPR screen revealed a gene called QPCTL, which codes for an enzyme that helps camouflage CD47 from the immune system and could be blocked with an off-the-shelf drug.

“If you can modulate CD47 levels by acting on QPCTL, that could be an interesting way to trick the immune system to clear cancer,” says Moffat.

It’s early days yet, but Kelley and Moffat are hopeful about QPCTL’s therapeutic potential in cancer, perhaps to get macrophages to target tumor cells. They are also launching a multi-lab collaboration PEGASUS project, for Phenotypic Genomic Screening at Scale, which will scale up the technology to interrogate a broad range of therapeutic targets.

On the regenerative medicine front, MICS will help reveal the genes that activate stem cells to turn into specialized cell types, which will make it easier to harvest desired cell types for therapy.

Although Kelley’s team initially developed magnetic cell sorting for isolating tumour cells from the blood, its repurposing for drug target discovery could have a wider impact, with MICS already attracting significant interest from the research community and industry.