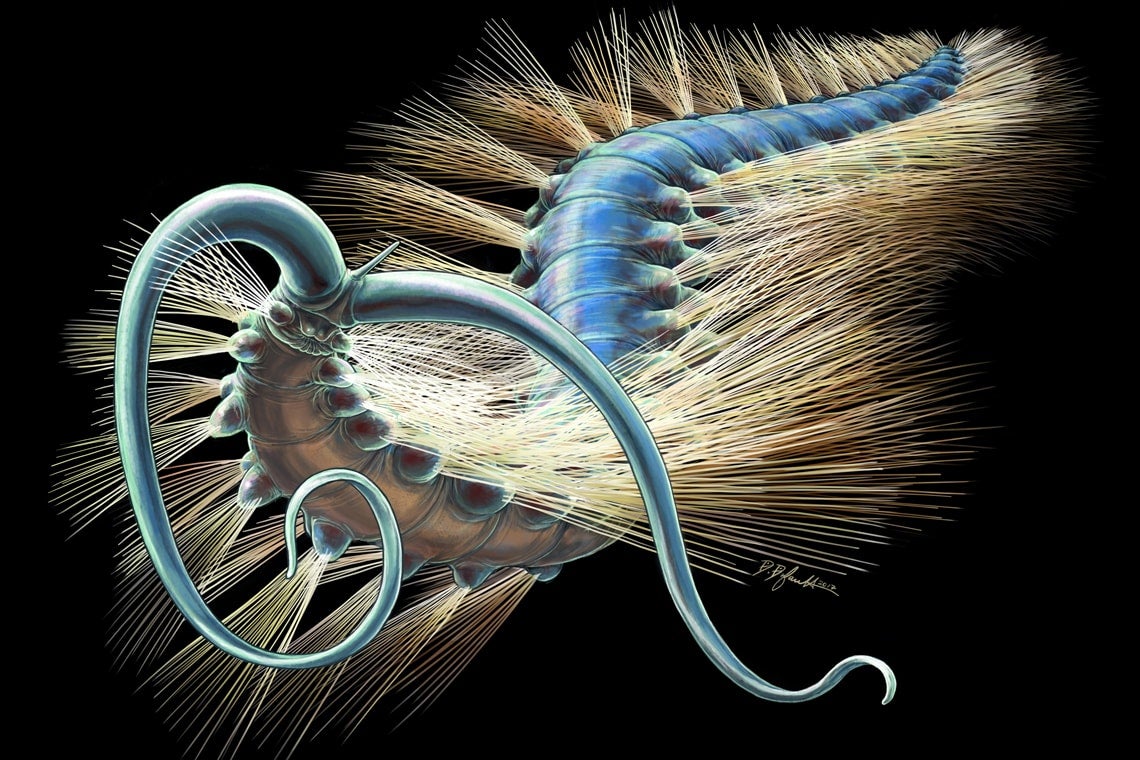 A new species of bristle worm, 'Kootenayscolex barbarensis', has been described for the first time from fossils found in the Marble Canyon site at the Burgess Shale in the Canadian Rockies (illustration by Danielle Dufault / ©Royal Ontario Museum)

A 508-million-year-old species of bristle worm, Kootenayscolex barbarensis, has been described for the first time from fossils found in the Marble Canyon site at the Burgess Shale in the Canadian Rockies.

The results, published in Current Biology, help explain the origin of the head in annelids, a highly diverse group of animals that includes modern-day leeches and earthworms.

“While the diversity of annelids in terms of their anatomies and lifestyles makes them ecologically important and an evolutionarily interesting group to study, it also makes it difficult to piece together what the ancestral annelid may have looked like,” said lead author Karma Nanglu, who is a PhD candidate in the department of ecology & evolutionary biology in U of T's Faculty of Arts & Science and a researcher at the Royal Ontario Museum (ROM). 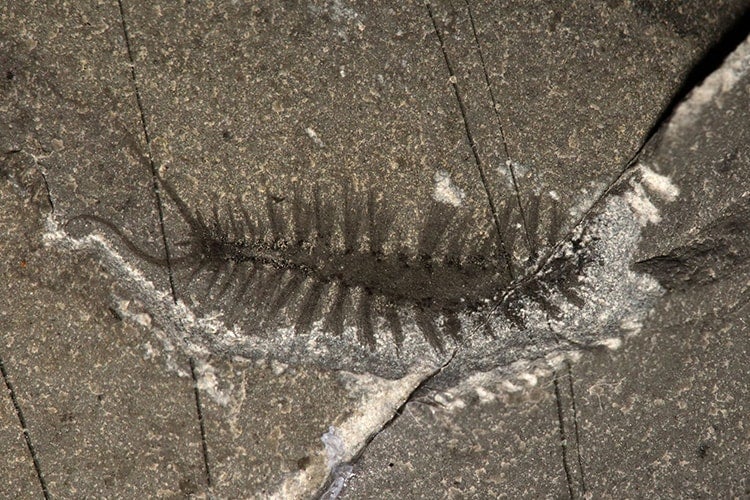 'Kootenayscolex barbarensis' is part of a group of animals called annelids (or the ‘ringed worms’). It had a pair of long sensory structures called palps on its head, with a small medial antenna between them. Its body was covered in fleshy appendages called parapodia which bear bristles called chaetae. These structures are used for movement (photo by Jean-Bernard Caron / © Royal Ontario Museum)

Although annelids are found all over the world – from the bottoms of oceans and lakes to mountain glaciers – their early evolutionary history is confounded by a poor fossil record, with few species described from well-preserved body fossils near the evolutionary origins of the group.

“While isolated pieces of annelid jaws and some mineralized tubes secreted by the animals are well known, preservation of their soft tissues is exceedingly rare,” said co-author Jean-Bernard Caron, an associate professor in the departments of ecology & evolutionary biology and Earth sciences at U of T and a senior curator of invertebrate palaeontology at the ROM.

“You need to look to truly exceptional fossil deposits like those found in the Burgess Shale to find well-preserved body fossils. Even then, they’re quite uncommon and many of the currently described species there are still poorly understood.”

One key feature of the new worm is the presence of hair-sized bristles on the head.

“Kootenayscolex possesses paired bundles of hair-sized bristles spread along the body. This is one of the diagnostic features of this group of animals,” said Nanglu. “However, unlike any living forms, these bristles were also partially covering the head, more specifically surrounding the mouth.

According to researchers, this new species seems to suggest that the annelid head evolved from posterior body segments which had pair bundles of bristles, a hypothesis supported by the developmental biology of many modern annelid species. 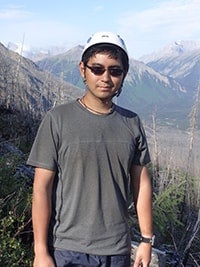 “The fine anatomical details preserved in Kootenayscolex allow us to infer not only its evolutionary position, but also its lifestyle, said Nanglu (left, at the Burgess Shale). “Sediment preserved inside their guts suggest that, much as their relatives do in modern ecosystems, these worms served an important role in the food chain by recycling organic material from the sediment back to other animals that preyed on them.”

“Though many species from the Cambrian Explosion possessed structures that were unlike their modern relatives, coupling new fossil discoveries such as Kootenayscolex with a deeper understanding of developmental processes presents a powerful tool for investigating these unique morphologies and, ultimately, the origin of modern animal diversity,” added Caron.