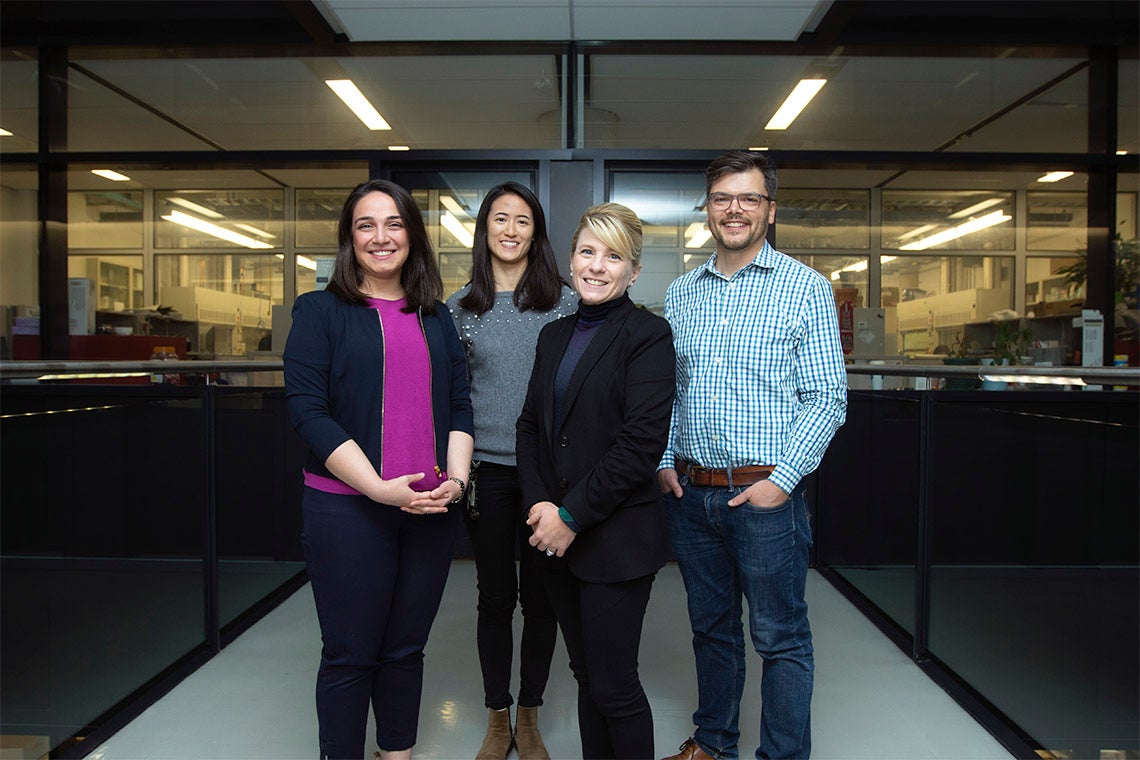 The U of T members of the interdisciplinary team (from left to right): Peivand Sadat Mousavi, Jenise Chen, Shana Kelley and Keith Pardee (photo by Steve Southon)

Researchers at the University of Toronto and Arizona State University have developed the first direct gene-circuit-to-electrode interface by combining cell-free synthetic biology with state-of-the-art nanostructured electrodes.

The interface, which is described in a recent study in Nature Chemistry, couples biology’s ability to sense with the memory and decision-making capabilities of electronic systems.

Long inspired by concepts from the field of electronics, synthetic biologists are seeking to re-program biological systems to carry out artificial functions for medical, environmental and pharmaceutical applications.

“This is the first example of a gene circuit being directly coupled to electrodes, and is an exciting tool for the conversion of biological information into an electronic signal,” said Keith Pardee, an assistant professor at U of T’s Leslie Dan Faculty of Pharmacy.

The interdisciplinary effort to create the new system brought together expertise in cell-free synthetic biology from Pardee’s lab, electrochemistry from the lab of U of T University Professor Shana Kelley and sensor design from the lab of Alexander Green, an assistant professor at Arizona State University. 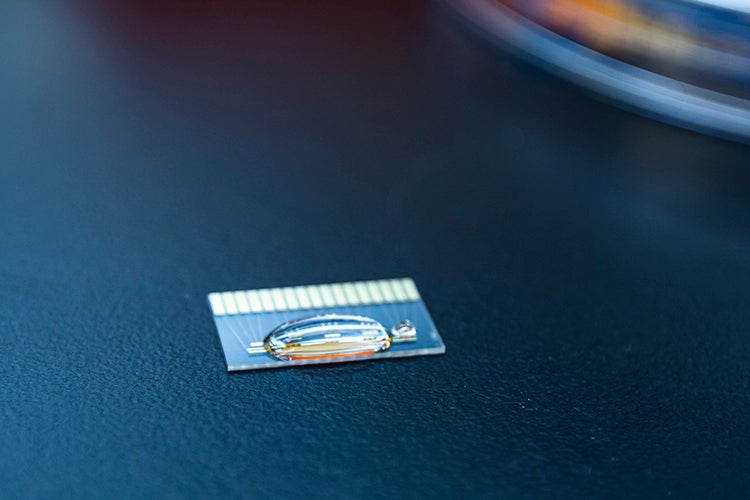 The new bio-hybrid system uses non-optical reporter enzymes contained within 16 microlitres of liquid (more is pictured here to be visible), which pair specifically with micro-patterned electrodes hosted on a small chip no more than one inch in length (photo by Steve Southon)

Pardee, whose research group specializes in developing cell-free diagnostic technologies that can be used safely outside the lab, received widespread attention in 2016 when he and collaborators released a platform for the rapid, portable and low-cost detection of the Zika virus using paper-based synthetic gene networks.

Bringing the capacity to detect the Zika virus outside of the clinic to the point-of-need was a crucial step forward, but the approach relied on conventional optical signaling – a change in colour to indicate that the virus had been detected. This posed a challenge for practical implementation in countries like Brazil, where viruses with similar symptoms require health-care providers to screen for several different pathogens in order to correctly identify the cause of a patient’s infection.

This highlighted the need for a portable system that could accommodate many sensors in the same diagnostic test, a capability known as multiplexing.  The challenge was that multiplexing with colour-based signaling is not practical.

“Once you get beyond three-colour signals, you run out of bandwidth for unambiguous detection. Moving into the electrochemical space gives us significantly more bandwidth for reporting and signalling. We’ve now shown that distinct electrochemical signals can operate in parallel and without crosstalk, which is a much more promising approach for scaling up,” said Pardee.

The new bio-hybrid system uses non-optical reporter enzymes contained within 16 microlitres of liquid which pair specifically with micro-patterned electrodes hosted on a small chip no more than one 2.5 centimetres in length. Within this chip, gene-circuit-based sensors monitor the presence of specific nucleic acid sequences, which, when activated, trigger the production of one of a panel of the reporter enzymes. The enzymes then react with reporter DNA sequences that set off an electrochemical response on the electrode sensor chip.

Peivand Sadat Mousavi, a PhD candidate with Pardee’s lab sourced the individual enzymes need to get the platform to work.

"We created the interface by repurposing enzymes typically found in the bacterial immune system. The enzymes cut DNA like scissors and that’s how we ultimately get them to produce electrochemical signals," she said. 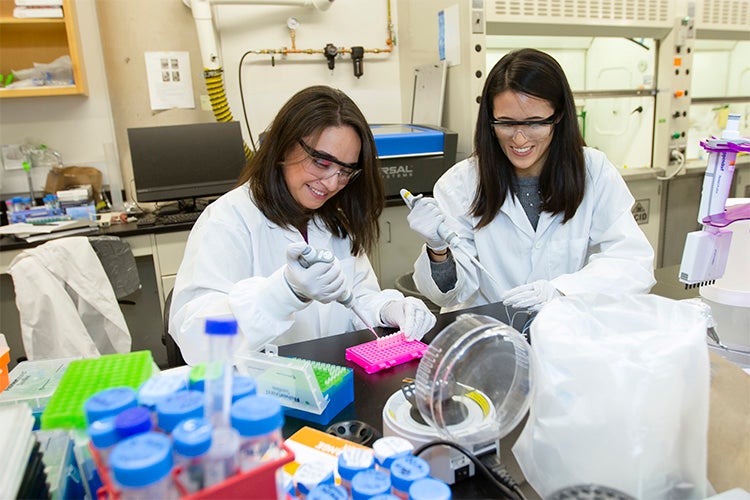 As a proof of concept, the team applied the new approach to detecting colistin antibiotic-resistance genes, which have recently been identified in livestock globally and represent a serious threat to the use of antibiotics as a last resort treatment for infection.  Four separate resistance genes were detected, demonstrating the ability of the system to effectively identify and report each gene independently and also in combination.

“What makes this combined approach so powerful is that the underlying connectivity of the gene circuit sensor outputs can be re-programmed at will by simply modifying the code at the level of the software rather than at the level of the DNA, which is much more difficult and time consuming,” said Kelley, whose research group specializes in the development of highly sensitive electrochemical sensors.

A powerful toolkit for the future

“This new system enables us to detect many different signals simultaneously, which is essential for diagnostics and monitoring systems,” said co-author Green of the Biodesign Institute at Arizona State University. “The electronic output means that in the future it can be readily interfaced with technologies like smartphones and distributed sensing arrays that could be brought directly to a patient’s bedside.”

Pardee and his research group are excited to see where others in the synthetic biology field will take the system.

“We’ve essentially created a new set of tools and opened up a new venue for signaling,” Pardee said. “With this new combined approach, we think we can really accelerate the field and its capacity to improve lives.”

The research was supported by the Natural Sciences and Engineering Research Council of Canada and the Canadian Institutes of Health Research, among others.