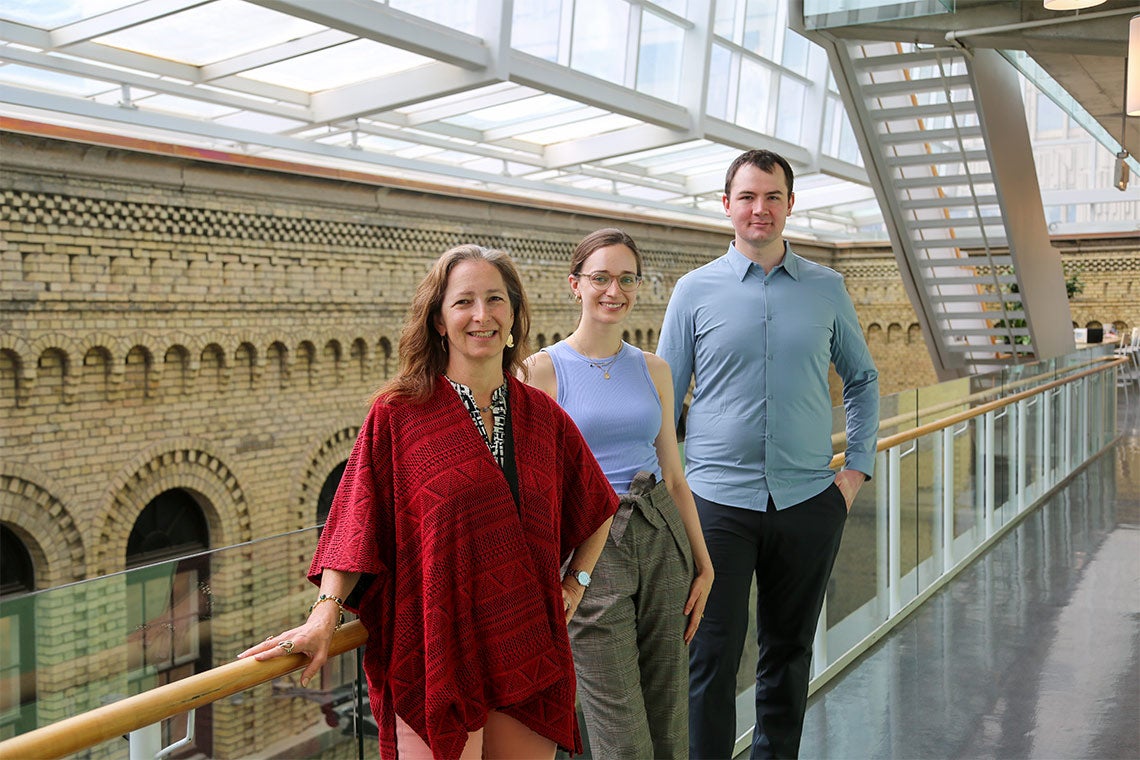 University of Toronto researchers have designed a new way to grow cells in a lab that enables them to better emulate cancerous tumours. The platform – based on a type of material known as a hydrogel, a soft jelly-like substance – opens new ways to advance treatment options for cancer.

By investigating the natural molecules found in breast cancer tissue, Alexander Baker, a post-doctoral researcher in the Faculty of Applied Science & Engineering, and Laura Bahlmann, a PhD student at the Institute for Biomedical Engineering, were able to design a more compositionally defined and reliable alternative to the standard material typically used by cell biologists known under the brand name, Matrigel. Their findings were recently published in Materials Today.

The new biomimetic hydrogel is composed of hyaluronan, which is found in healthy tissue and increases during the progression of many cancers, including breast, lung, brain, prostate, ovarian and pancreatic but is notably absent from Matrigel. These materials also contain laminin, a protein that is abundant in breast tissue.

Together, these two ingredients resulted in a hydrogel that closely mimics native tissue. It has all the beneficial properties of Matrigel, but it goes further by facilitating communication between cells and the surrounding tissue.

When comparing lab-grown patient biopsy cells in the presence of their new hydrogel versus Matrigel, the team observed different cancer cell growth rates and responses to drugs. When they took the same hydrogel and injected the patient cells to produce an animal model of the disease, they observed differences in the immune response, where Matrigel seemed to bias the results, thereby confounding researchers’ understanding. However, the new hydrogel provided an unbiased canvas to study how tumour growth impacts the host immune cellular response.

“With our increasing understanding of the immune system in cancer, the importance of unbiased results cannot be overstated,” says Shoichet.

These results suggest that the new hydrogel can produce outcomes that are more like those typically observed in human cancer tumours. One example is the ability of breast cells to self-assemble into 3D structures with key components oriented in a certain direction, a process known as polarization.

“When working on drug screening, it’s important to be able to grow diseased cells because those are the ones you want to kill,” says Baker, who co-led the study with Bahlmann.

Before a new cancer therapeutic can be approved for human use in Canada and the United States, Health Canada and the FDA require it passes in vivo animal studies. This includes patient-derived xenograft studies, which are models of cancer where the tissue or cells from a human tumour are implanted into immunodeficient mice. These models allow researchers to better emulate human cancer growth and can be used to study the effects of treatments on clinically relevant patient cancer cells.

But in some instances, the time required to produce these animal models for cancer research is too long. A lab-based approach to grow these valuable patient cells in a more defined material can accelerate the screening process.

The new hydrogel was designed to emulate the cancer cell microenvironment, creating a highly reliable system for cancer studies. The researchers were able to control the inputs, resulting in controlled mechanical and biochemical properties relevant to the tissues they were emulating.

“The long-term goal for cancer research is to move away from animal studies,” says Bahlmann. “If we could eventually say that our platform is predictive of the in vivo response, there would be a lot of advantages, including reducing the amount of time it takes to get results from a study.”

The team collaborated with Dr. David Cescon, an oncologist and clinician-scientist at the Princess Margaret Cancer Centre in the University Health Network, to obtain the patient breast cancer cells used in the study. And while much of the study was focused on breast cancer, they also used the platform to grow eight other cancer types – brain, colon, leukemia, lung, lymphoma, ovarian, pancreas and prostate – and expanded their research to study cell invasion.

“We are working to understand the processes of cell invasion: when the cancer becomes more aggressive, harder to treat and it starts to infiltrate different microenvironments within the body,” says Bahlmann.

The researchers hope to show that by growing other cancer cells in their hydrogel, they can discover new targets and new drugs for the treatment of breast and other cancers.

“I think we are moving towards the era of precision medicine, and if we can screen a patient’s cells quickly and effectively, then we should be able to identify the best therapies for that individual,” Shoichet says. “Our new hydrogel starts us down this journey of drug discovery.”