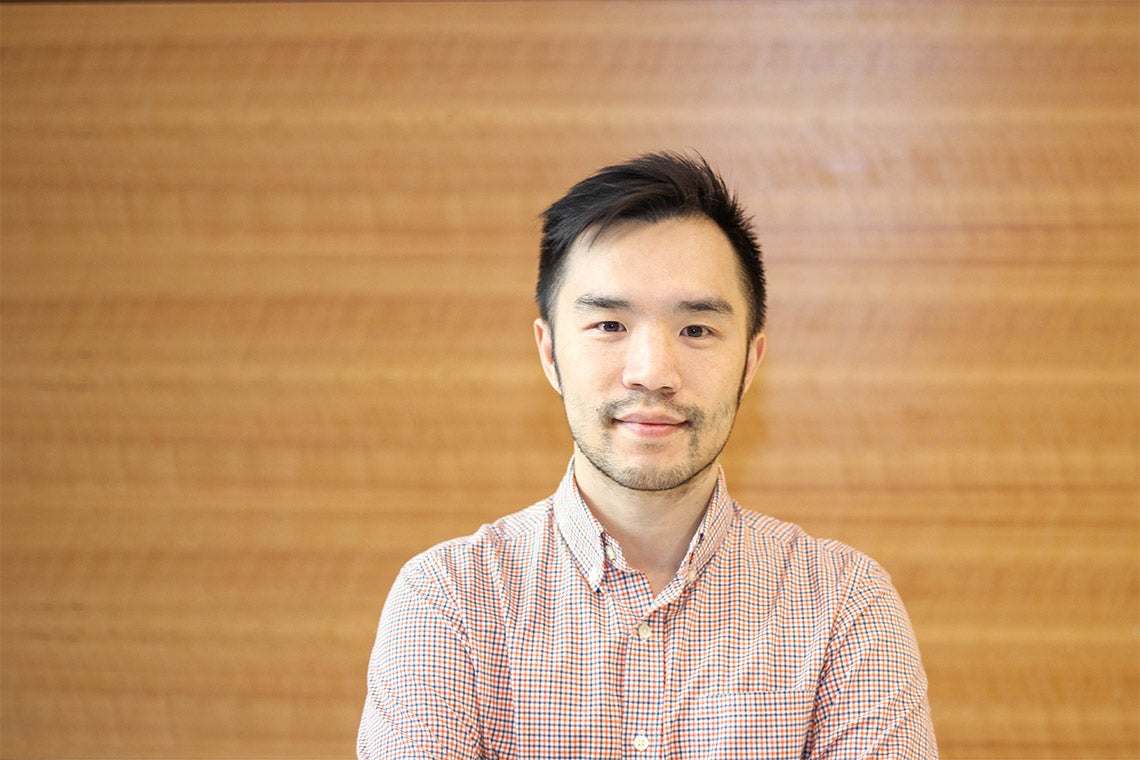 Leo Chou, of the Institute of Biomaterials and Biomedical Engineering, says his non-traditional approach to testing for the novel coronavirus could help avoid the bottlenecks that have emerged with established methods (photo by Qin Dai)

Testing for viruses is not a new science, but the COVID-19 pandemic has exposed the bottlenecks in established methods. Now, a team led by Leo Chou of the University of Toronto’s Institute of Biomaterials and Biomedical Engineering is pursuing a non-traditional approach that, if successful, could lead to simpler, faster tests.

“What we are finding out in this pandemic is that surges in global demand can cause every step in the process to break down due to supply chain shortage,” says Chou, an assistant professor who joined U of T’s Faculty of Applied Science & Engineering as a faculty member in January 2019. “There are opportunities to make these tests simpler and more streamlined.”

While the project is in its early stages, the team hopes to overcome the limitations of traditional testing methods by pursuing a strategy based on short, synthetic strands of DNA. These strands can be customized to react in certain ways in the presence of genes from the virus that causes COVID-19.

Currently, most tests begin with a nasal swab to extract virus particles from the body. These particles are then shipped to a testing lab, where heat, detergents and enzymes are used to open them up and expose the viral RNA – the genes that the virus uses to replicate itself.

The RNA is then subjected to the “gold standard” technique known as real-time polymerase chain reaction (RT-PCR). Using specialized enzymes and a device called a thermocycler, RT-PCR amplifies targeted RNA sequences – such as those known to code for viral genes – to determine whether they are present in the sample.

In theory, RT-PCR can provide results in a matter of hours, but the need for specialized infrastructure has been a key limitation of testing around the world.

“Because samples collected at the point of care must be shipped to a central lab for testing, logistics become a key issue,” says Chou. “For one single sample to get tested, you are usually talking about a turnaround time of two or three days.”

In contrast, the new approach could lead to a one-step test. The team aims to design customized DNA sequences that are capable of self-assembling into a larger structure, but which are missing a key catalyst to bring them all together: an RNA sequence specific to the COVID-19 virus.

“The best analogy I can think of is growing rock candy,” says Chou. “You start with a saturated solution of sugar molecules in water, but they don’t do anything because they don’t have anything to crystallize around. When you introduce a stick into the solution, the crystals form rapidly around it.”

In this analogy, the short DNA sequences made by Chou and his team are the sugar, and the viral RNA serves as the stick. By design, only the correct RNA sequence would work – genes from other viruses or contaminating organisms would not trigger the same reaction.

If the virus is present, its RNA would quickly cause the DNA strands to self-assemble. The team could easily attach pigments or light-emitting molecules to the DNA strands, resulting in a solution that changes colour in the presence of viral genes.

Chou says that the technology already exists to manufacture the short DNA sequences quickly and inexpensively, and that these molecules are stable, meaning they can be stored wet or dry at room temperature for months or years.

Because it wouldn’t require complex materials or equipment such as enzymes or thermocyclers, the new test could be done in one step at the point of care, eliminating logistical bottlenecks that are currently hampering global testing efforts.

While he believes that the new approach is promising, Chou cautions that it will take many months before a prototype can be developed, and many more to determine whether the test is anywhere near as reliable as RT-PCR.

“All the tests that are being used right now took years to develop and clinically validate,” he says. “This is no different, but the strategy we’re proposing is unlike anything that is already being used.

“We aim to have proof-of-concept done within a year. If it works, it could have some very exciting advantages.”