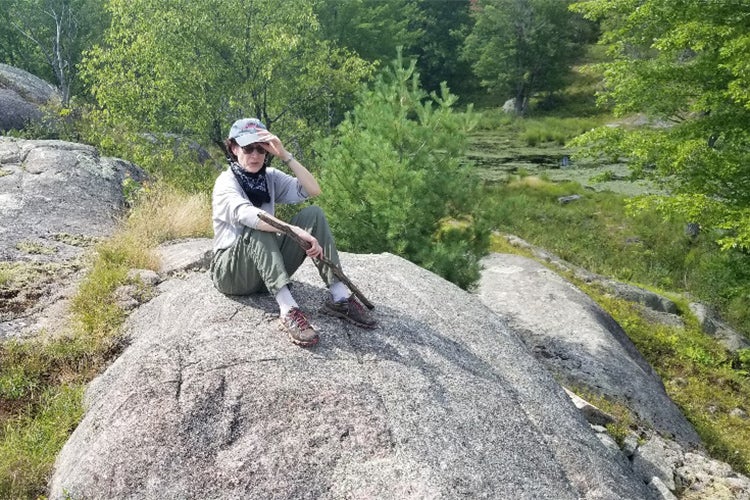 Over the past seven years, the Northern Oral Language and Writing through Play (NOW Play) project has successfully helped boost the literacy skills of children in rural northern communities through play-based learning.

Now, the University of Toronto-led project is poised to take the next step in its evolution with a focus on Indigenous language and cultural learning in communities in northern Alberta, Ontario, New Zealand and Sweden.

Shelley Stagg Peterson, a professor in the Ontario Institute for Studies in Education (OISE) who is leading the project, says the first cycle of NOW Play was in part driven by concerns raised by kindergarten and Grade 1 teachers in Canada’s northern communities about the language skills of their students.

“Working with northern teachers, we focused on oral language and writing, thinking about ways to incorporate play into classroom teaching and learning,” Stagg Peterson says.

While the project was deemed a success, local teachers also expressed a desire to be able to support Indigenous language development in their classrooms, too.

The current project, dubbed NOW Play 2, aims to incorporate Indigenous language development into play-based learning by building teaching capacity in northern and rural communities while generating knowledge and resources for educators. It is being supported by a recent $2.5-million Social Sciences and Humanities Research Council (SSHRC) Partnership Grant (the first project also received a partnership grant in 2013).

“The team is doing crucial research that has had – and will continue to have – strong positive impacts in collaboration with Indigenous communities in Ontario, in Canada, and beyond,” said Michele Peterson-Badali, OISE’s associate dean, research, international and innovation.

“The NOW Play partnership exemplifies OISE’s mission to enhance the social, economic, political and cultural well-being of individuals and communities locally, nationally and globally through leadership in teaching, research and advocacy. I wish them continued success in this collaboration with their research and teaching partners.”

Stagg Peterson – a former classroom teacher in rural northern Alberta – says NOW Play 1 was shaped by teachers’ priorities and concerns from the beginning.

“The teachers designed their own projects, they carried out the activity, gathered the data – and then, together with my colleagues and me, looked at what the data were showing us,” she says. “We learned from each other.”

Over the seven years of the first project, a range of play activities – incorporating elements of writing, language and local cultural references – were introduced to kindergarten and Grade 1 classrooms. The resulting classroom ideas, models and research papers written by the many researchers and graduate students involved in the project are available for free on the NOW Play website.

“This latest SSHRC Partnership Grant is an important recognition of the progress made by NOW Play in working closely with partners in northwestern Ontario and northern Alberta to lever play-based learning to improve the writing and language skills of children in those communities,” said Ted Sargent, U of T’s vice-president, research and innovation, and strategic initiatives.

“This second iteration of NOW Play exemplifies the value of collaborative action research, with university researchers and community partners learning from one another and working together to advance knowledge on a crucial issue – in this case the language skills of young children in remote northern communities.”

Children who benefited from the first iteration of the NOW Play project will be able to carry on their progress with the latest version.

“We’re thinking we can develop capacity so that the children whose language and writing are now stronger can now be supported by teachers who know how to build on that enhanced knowledge,” says Stagg Peterson.

The project will also involve gathering more input from community and family members on each Indigenous community’s approach toward teaching and interacting with children.

“The approaches and different tools we will be developing will come from Indigenous ways,” says Stagg Peterson. “They may turn assumptions about what it means to teach language and writing on their heads.”

Stagg Peterson says she hopes the second cycle of the project will have a multi-pronged effect by boosting children’s Indigenous language and cultural knowledge and literacy skills, generating research and resources and strengthening teachers’ skill sets.

“I love the North and, from my own teaching experience in northern Alberta, I know how challenging it is for professional development opportunities to be brought to northern communities because of the logistics and cost. I have a lot of faith in action research, both for producing new knowledge and also for teachers’ professional development,” she says.

“If you look around at educational research in Canada, especially in the literacy field, I would say 90 per cent of it is conducted in urban or suburban communities – not in northern communities. We may be able to address the gap in the broader knowledge base about social and cultural influences on children’s learning by introducing northern rural and Indigenous contexts.”

SSHRC Partnership Grants support formal partnerships between post-secondary institutions and other organizations “that will advance knowledge and understanding on critical issues of intellectual, social, economic and cultural significance.” In NOW Play’s case, the project involves academics from OISE and numerous Canadian universities, research partners in the University of Auckland in New Zealand and Umeå University in Sweden, as well as community organizations and partners in northern Ontario and Alberta.