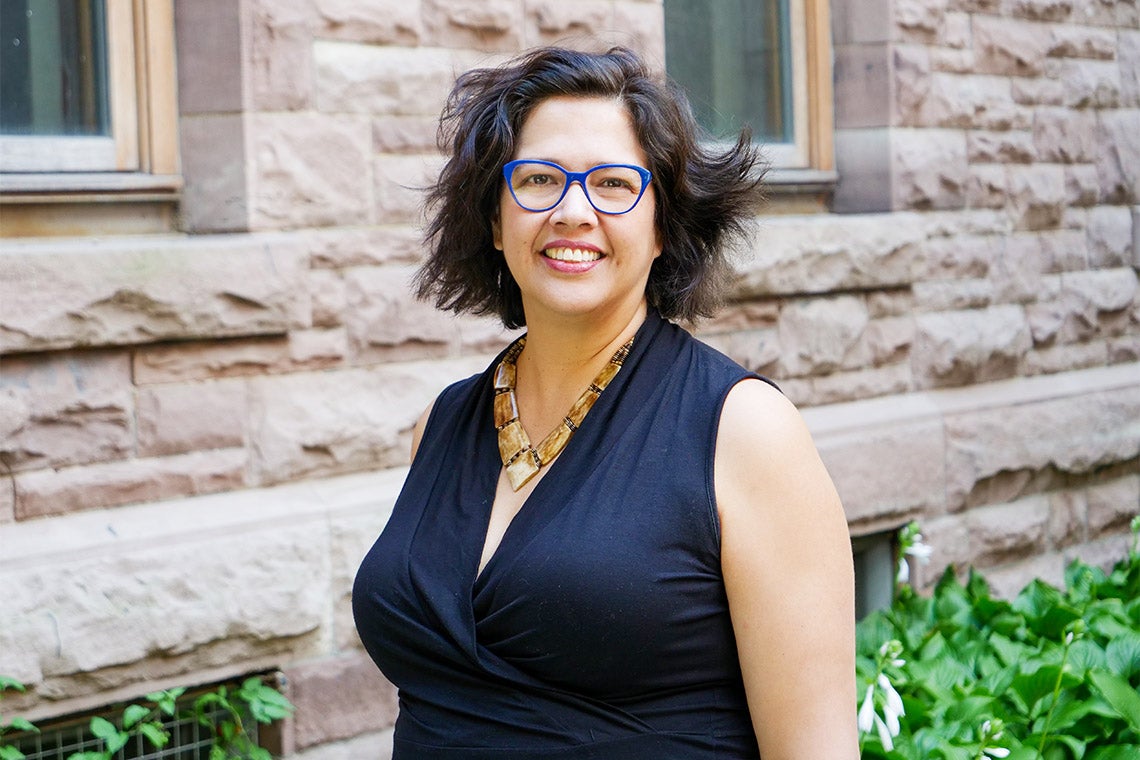 "Ultimately, I believe that digital technology can help contribute to Indigenous resurgence," says U of T's Jennifer Wemigwans (photo by Marianne Lau)

Seven years ago, Jennifer Wemigwans received a call from Victor Masayesva Jr., a highly regarded Hopi Knowledge Keeper and artist, inviting her to a gathering of Indigenous Timekeepers from South and North America.

Wemigwans, an assistant professor in the department of leadership, higher and adult education in the Ontario Institute for Studies in Education (OISE) at the University of Toronto, was taken aback.

Highly respected in their communities, Timekeepers are Indigenous Elders or Knowledge Keepers who carry sacred teachings from their communities’ traditional calendar systems – a gift she did not hold. Was this a mix-up?

It turns out the Hopi leader had an important request for her.

Masayesva Jr. was calling on behalf of 40 Timekeepers from across North and South America who wanted, for the first time in centuries, to begin publicly sharing knowledge from each of their calendars, said Wemigwans. Specifically, they wanted to share their calendars online and they knew that Wemigwans, an expert in translating Indigenous knowledge to new media platforms, would be able to help.

Followed by Indigenous communities prior to colonization, traditional calendars represent the world views of the nations from which they originate and are seen as an invaluable source of Indigenous traditional knowledge and ways of being. When Indigenous cultural practices were outlawed during colonization, many of these calendars were hidden away by Timekeepers who have been waiting for the right time to bring them back into the open.

In sharing the calendars online, the Timekeepers wanted to work with someone who not only understood new media technologies but also the complexity and responsibility involved in digitally reproducing sacred traditional teachings, said Wemigwans. It is an expertise that few possess, but one that Wemigwans has spent her career developing.

The Timekeepers hoped to produce something similar in impact to Four Directions Teachings, an Indigenous educational website site that Wemigwans produced in 2006 while pursuing her PhD at OISE. The project is of particular significance because it is the first educational website to feature digitized versions of Indigenous teachings shared by Elders and Knowledge Keepers in Canada.

Understanding the importance of sharing and preserving traditional Indigenous knowledge, Wemigwans immediately agreed to the collaboration, and this past summer, the Timekeepers Project officially kicked off. Alongside her research partners Mindahi Bastida-Muñoz and Geraldine Patrick Encina of the Centre for Earth Ethics, Wemigwans spent July and August meeting with Timekeepers in Central America to receive teachings from their respective calendars.

By the end of this year, she will have met with Timekeepers from 10 communities across Guatemala (Achi, Kiche, Tzutujil), Mexico (Ñahñu-Otomi, Yucatec), Canada (Cree, Anishinaabe, Haudenosaunee) and the United States (Hopi).

From there, Wemigwans and her team will review their interviews with each Timekeeper, analyze the teachings, pull out key themes and, in close collaboration with each Elder, develop synthesized versions of the teachings for an interactive educational website that will launch in 2021.

This first iteration of the website will feature teachings from three selected calendars. The remaining calendars will be brought onto the site in a future phase of the project.

Why do the Timekeepers want to create this online resource?

Since colonization, Timekeepers have been protecting their calendar knowledge and waiting for the right time to bring it back into the open. With the end of the latest Mayan calendar cycle in May 2013, many Timekeepers in South and North America feel that time is now. For them, the start of the new cycle marks the beginning of a new dawn of truth, recovery, reconciliation and investment in Indigenous ways of knowing and being. By sharing their traditional calendars online, the Timekeepers hope to facilitate a return to traditional Indigenous ways of living as well as the recovery and fortification of Indigenous calendar knowledge across Turtle Island.

There’s also a sense of urgency that’s driving this project. The Timekeepers feel that the knowledge in their calendars can play a role in responding to climate change. Indigenous calendar systems contain the original instructions for living on territories across Turtle Island, including foundational knowledge about diverse lands and the articulation of responsibilities and stewardship processes for those lands. The Timekeepers hope to help communities return to this knowledge and begin living in ways that can heal and mitigate some of the effects of climate change – and, in addition, educate non-Indigenous people on how to live with the land.

This is a hard question to answer because a lot of it will be determined by the content, which we are currently gathering. However, it will take the form of an online documentary that, like Four Directions Teachings, will be highly interactive and dynamic. Our goal is to develop a narrative and an interface that respectfully captures key themes and reflects the knowledge of the Timekeepers in ways that are culturally ethical and responsible.

With respect to interface design, the knowledge on the site will be presented through audio narrations and robust graphics that will visually reflect Indigenous pedagogical approaches, and will be available in both English and Spanish in order to facilitate knowledge sharing between Timekeepers and Indigenous communities in North and South America.

Four Directions Teachings is an online Indigenous education resource that I produced in 2006 which features sacred teachings shared directly from Elders in North America, from the Blackfoot, Cree, Mohawk, Mi’kmaq and Ojibwe Nations.

The website is different in that most Indigenous online education resources are made up of interpretations of Indigenous knowledge that have not been verified by Elders or Knowledge Keepers – those who carry their community’s teachings. As such, many of these sites run the risk of inaccuracies and misrepresentation.

You coined the term ‘digital bundle’ to refer to websites like Four Directions Teachings. Tell us more about this concept.

In Indigenous cultures, “community knowledge bundles” are collections of sacred items or knowledge held by a person with care and ceremony. Digital bundles, then, are places on the internet where sacred knowledge is represented, and naming them as such elevates these sites because Indigenous communities understand that knowledge bundles carry the protocols and responsibilities that come with such a designation.

In my book, A Digital Bundle: Protecting and Promoting Indigenous Knowledge Online, I draw a distinction around what a digital bundle is, as well as the processes, ethics, methodologies and responsibilities involved in creating one. In doing so, I hope to help others broaden their understanding of Indigenous practices online.

What do you think will be your biggest challenge in creating this website?

The biggest challenge will be ensuring that the entire process of creating the online documentary respects each community’s cultural protocols. Indigenous protocols inform us of the responsibilities around a community’s knowledge – for example, how the knowledge should be transferred, how to maintain the integrity of the knowledge, and what can or cannot be shared publicly. Each community will have its own protocols for sharing Indigenous calendar knowledge and I will have to be mindful of, and responsible for, those protocols in ways that respect every single community that I am working with.

As an academic and cultural transmedia producer working in this area, it is a tremendous gift and honour to be invited to partake in and ethically share Indigenous community knowledge with a wide audience. Being honoured in this way means I must learn the protocols and be mindful of my accountability to the diverse communities that have shared knowledge with me.

How did you become interested in digitizing traditional Indigenous knowledge?

It was an idea that came to me in the early 2000s when I was working as an adult literacy educator for Indigenous organizations in Toronto. During my training, one of the first things Elders taught me was that the most important thing we could offer Indigenous learners was an understanding of traditional Indigenous knowledge.

This made me feel really challenged. I thought, ‘Then you need to be in the classroom, because you’re the Elder. You’re the one who carries sacred knowledge. I’m just an instructor.’ Of course, I knew this wasn’t possible – Elders and Knowledge Keepers already face multiple responsibilities and demands from their own communities. So, my fellow instructors and I began having conversations around what it would be like to build a culturally sensitive pedagogical resource online that could help Indigenous educators like ourselves introduce and share aspects of traditional Indigenous knowledge with students.

Around that time, I was also starting to think about how the internet could be used to lead to greater empowerment for Indigenous Peoples. I thought that the flexible ways in which the internet can be explored was well suited to adult learners who want to gain knowledge at their own pace. And because the internet can present information in both visual and audio formats, I felt like it was a good medium for helping Indigenous people experiencing learning issues related to literacy, perceptions of learning and learning styles.

These experiences eventually led to Four Directions Teachings. When the website was finally launched in 2006, I received many letters from Indigenous communities across Canada saying they wanted to see more resources like it. That’s when I thought, “Yes. This is the work I need to be doing.”

What impact do you hope your work will have?

Indigenous communities everywhere are talking about representing their Knowledges online but aren’t sure what it might look like. I hope my work contributes to that conversation so we can see more digital bundles come into being. Ultimately, I believe that digital technology can help contribute to Indigenous resurgence, and while digital bundles can never replace face-to-face time spent with Elders and Knowledge Keepers, they can help provide a really good introduction to traditional teachings and a safe space for investigation, exploration and dialogue.