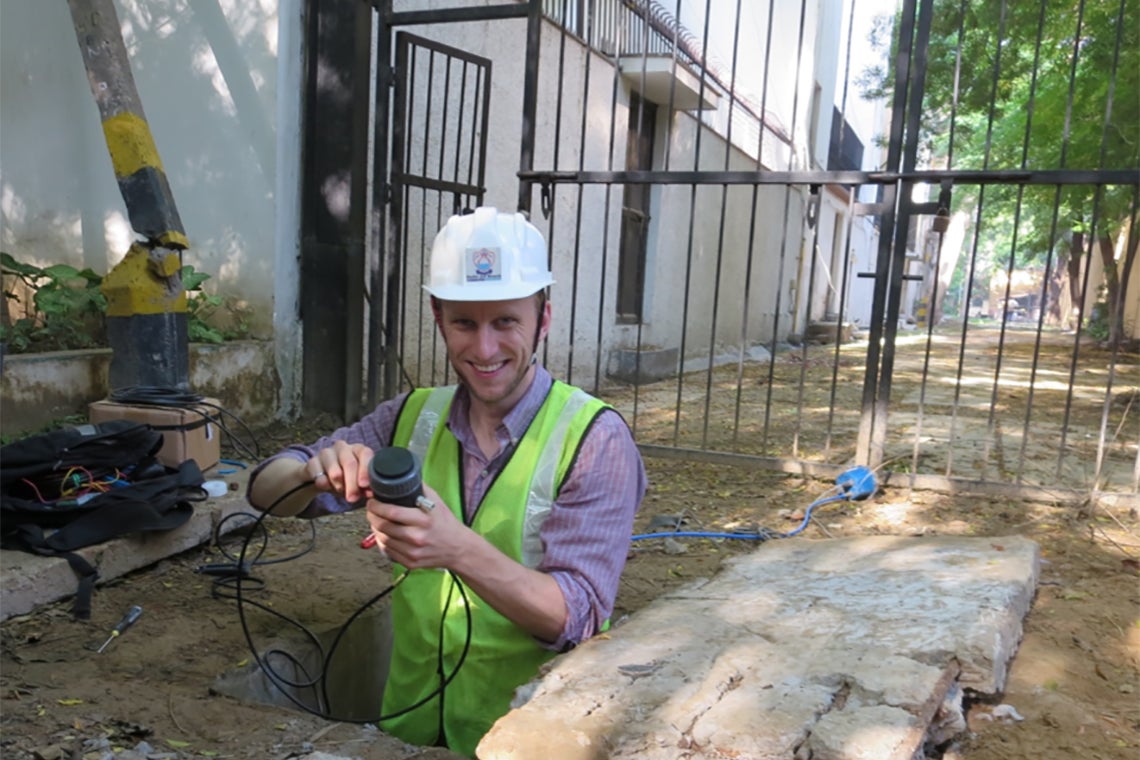 David Taylor, an assistant professor in U of T's department of civil and mineral engineering, checks on his pressure, flow and turbidity sensors in a valve chamber in Delhi, India (photo courtesy of David Taylor)

For more than a billion people around the world, running water comes from “intermittent” systems that turn on and off at various times of the week.

The idea of an intermittent water system may seem strange to engineers from developed countries since constantly filling and emptying pipes puts stress on the system and opens the door to contamination from rainwater or sewage.

But University of Toronto researcher David Taylor believes there may actually be benefits to intermittent systems.

“One obvious example is that a pipe can’t leak if there is no water in it,” says Taylor, an assistant professor in the department of civil and mineral engineering in the Faculty of Applied Science & Engineering. “If you have no budget for repairs, turning off the taps at night when nobody is using them is a very effective way to stop losing water to leaks – at least in the short run.”

In a paper recently published in Water Resources Research, Taylor proposes a simple, yet powerful model to explain why and how these systems came to be – and how they fit into the global challenge of meeting international targets for human development and safe drinking water.

His PhD thesis involved working with water companies in Delhi, India and trying to understand how intermittent operation affected their ability to meet customer demand. One way to do this is to build a hydraulic model – a virtual representation of every pipe, valve and customer inside a computer. But Taylor quickly found that such detailed models weren’t especially helpful.

“These systems are chaotic,” explains Taylor. “There are often pipes or valves that are missing from the official charts. We usually don’t know as much as we think we do, and in that situation fancy models can’t tell us much.”

Rather than give up, Taylor asked himself a question: What would the model look like if I admit that I know almost nothing about the network?

“You don’t need a detailed understanding of food chemistry to know that if you want twice as many cookies you had better add twice as much of everything, not just the flour,” says Taylor. “It turns out that if you model a water supply system in this simple, first-order way, there’s a lot you can learn.”

Taylor’s single-equation model can, among other things, describe the key differences between how a system behaves when customers are satisfied versus when they are not.

When customers are not satisfied, doubling supply time – say, moving from one to two hours per day – requires twice the amount of water, because people are taking all they can get. But when customers are getting enough water, demand levels off. In this situation, each additional hour costs a lot less because weaker effects, such as leakage, are now the dominant factor.

This distinction helps resolve a long-standing debate about whether intermittent systems waste water or save water. In the unsatisfied case, they probably save water, but they do so by leaving customers thirsty. In the satisfied case, the hassle of turning off and on the pipes probably isn’t worth the gain in terms of water savings.

In his paper, Taylor lays out his model and describes how it might be used to analyze existing systems and set goals for new ones. He calibrated the model by comparing its results with those of a much more complex one and found that the agreement between the two models was high enough to be able to provide useful insights, such as whether a given upgrade is likely to be cost-effective.

“The model lets you see right away what the effect of altering a parameter is going to be, whether it’s leakage or demand or whatever,” says Taylor. “That enables you to do these back-of-the-envelope calculations and determine whether what you’re proposing is feasible.”

Another key aspect of the model is that it is dimensionless. For example, the amount of time the system supplies water is not measured in minutes or hours, but rather the percentage of time the system is turned on. This makes it easier to compare systems with each other. Taylor also hopes that it will help in global efforts to meet the UN’s Sustainable Development Goals and its Human Right to Water.

“These documents say that water needs to be ‘available when needed,’ but that might mean different things in different places,” he says. “Maybe its 24 hours a day, maybe it’s 12, maybe it’s less. What I hope this model can do is present a theoretical framework for how we decide which systems count as safely managed water supplies and which ones don’t.

“Without a way to decide which intermittent systems count as ‘safe’, we don’t stand a chance of hitting our 2030 global goals for access to clean and affordable water,” he adds.

“The model can help guide us as we start to make the major infrastructure investments needed to hit these goals.”

The research received support from the Natural Sciences and Engineering Research Council of Canada.