Shortly after the Mexican Revolution, the country’s leaders believed the best way to create a healthy young generation was through campaigns and efforts to minimize disability. In their eyes, disability – both physical and intellectual – was the effect of unhygienic living conditions or poor parenting. Minimize the cause, they figured, and the effect is ultimately reduced.

Susan Antebi, an associate professor in the department of Spanish & Portuguese in the University of Toronto’s Faculty of Arts & Science, says she wanted to dive into this period of history and study the perceptions and attitudes toward human differences – elements of which are still perpetuated today.

“One of the unique aspects of my work is disability studies,” says Antebi. “I focus on departures from notions of normalcy, and on the ways such differences reshape our perceptions of history, as well as the injustices disabled people are often subjected to, historically and in the present day.” 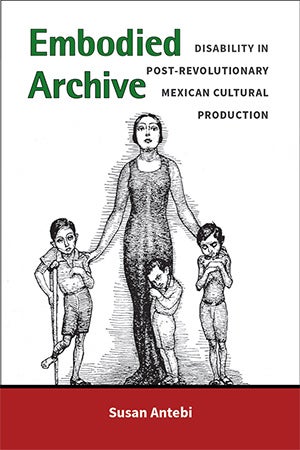 In Mexico’s case, the approach to people living with disabilities in the early part of the 20th century aligned with the country’s overarching goal of eugenics – the promotion of desired characteristics in order to improve future generations. While Antebi says Mexico’s version of eugenics wasn’t as harsh as those adopted by other countries – for example, there were no sterilization programs for people with disabilities such as those conducted in Nazi Germany or the United States in the 1930s and 1940s – she notes Mexico’s government leaders still believed disability could be minimized.

“It's a time period of very rich cultural production,” says Antebi. “People have worked a lot on the Mexican Revolution because it's such a tumultuous cultural period. But disability has not really been emphasized, and I thought that was something important to bring to the forefront.”

That led Antebi to bring together Mexican literature, history, disability studies and personal reflections in her book, Embodied Archive: Disability in Post-Revolutionary Mexican Cultural Production, which was awarded the Tobin Siebers Prize for Disability Studies in the Humanities late last year.

“The title of the book refers to the experience of witnessing written documents, ‘embodying’ them, or making them new through our experience,” says Antebi. “This witnessing as reactivation of the past also allows for a space through which to denounce historical and ongoing injustices.”

“There were many things that struck me – certainly it's very disturbing,” says Antebi. “But my interest in the book was not just to study the contents of these documents, but also to write about the experience of encountering them in our contemporary world – to think about what they mean, and what they come to mean in the present day.”

In the archives, Antebi discovered a great deal of scrutiny paid to children, including anthropometric measurements of their bodies – lung capacity, height and weight – as well as their IQs.

“It’s very closely tied to notions of race and racialization,” says Antebi. “There's a sense in which the ideal Mexican population is Mestizo – a mix of Indigenous and European ancestry coming together to forge a new and powerful race. And so, part of those measurements and interest in gradually purging the nation of unwanted differences coincide with that racial imperative.”

Rigorous measuring and monitoring extended to the state of school buildings, with an emphasis on air quality, more hygienic spaces, lighting and even school desk and textbook placement.

“There’s this biological metaphor that goes between the children who occupy the school and the health of the building,” says Antebi. “There were physicians who went into schools to monitor both the children and the buildings to make sure things were working properly.”

In addition to frequent measurements and testing, there were also anti-alcohol campaigns, programs to eradicate syphilis, as well as efforts to enhance prenatal and postnatal care.

“There were all kinds of social activities and programs to improve the health and robustness of the population, and ultimately create a positive impact and improve reproductive outcomes,” says Antebi.

The efforts created a history of injustices for children with disabilities and their families.

“The use of IQ tests, along with anthropometric testing, meant that schoolchildren were labeled as ‘retrasados’ or delayed, and placed in different groups or sent to special schools,” says Antebi.

“Terminology such as ‘idiots’,’ imbeciles’ and ‘feebleminded’ was used. Large sectors of the population were classified as ‘abnormal’ because of their socioeconomic status, disability or appearance.”

In some cases, the families of children with disabilities received public welfare. But many of them were kept in institutions against their will. Some children, either because of disabilities, behaviour or socioeconomic status, were sent to farm schools where they were expected to work to partially subsidize their cost of living.

“One of the conclusions from my research is that eugenics, as a way of thinking, doesn't really end in the 1940s,” says Antebi. “Many of these ways of thinking about what constitutes a healthy child or a normal person continue and are perpetuated in different ways today.”

That’s why she believes studying this history is so important.

“The archive is not just a fixed repository in the past, it’s part of a disability genealogy through which we can go back and understand the connections and have a better understanding of how we conceive of differences today.”