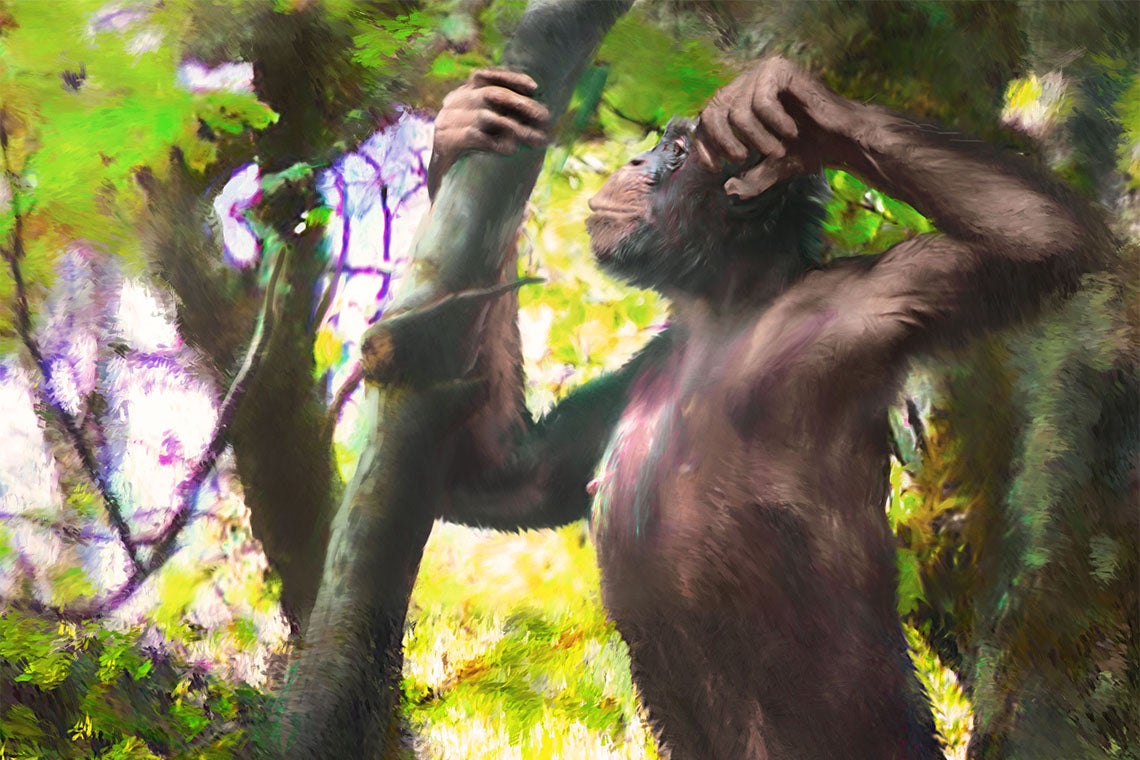 Our upright posture may have originated in a common ancestor of humans and great apes who lived in Europe – and not in Africa, as previously thought. That’s the conclusion reached by an international research team led by the University of Toronto’s David Begun and the University of Tübingen’s Madelaine Böhme.

Analysis of fossils recently discovered in southern Germany tells of a previously unknown primate named Danuvius guggenmosi that lived 11.62 million years ago. The researchers, who published their findings this week in the journal Nature, suggest the animal was well-adapted to both walking upright on two legs as well as using all four limbs while climbing.

The ability to walk upright is considered a key characteristic of humans. Up to now, the oldest evidence of an upright gait is approximately six million years old, and was found on the Mediterranean island of Crete as well as in Kenya. The new discovery places the function nearly twice as long ago as previously believed.

“Danuvius combines the hindlimb-dominated bipedality of humans with the forelimb-dominated climbing typical of living apes,” says Begun, a professor in U of T’s department of anthropology in the Faculty of Arts & Science.

“These results suggest that human bipedality evolved in an arboreal context over 12 million years ago.” 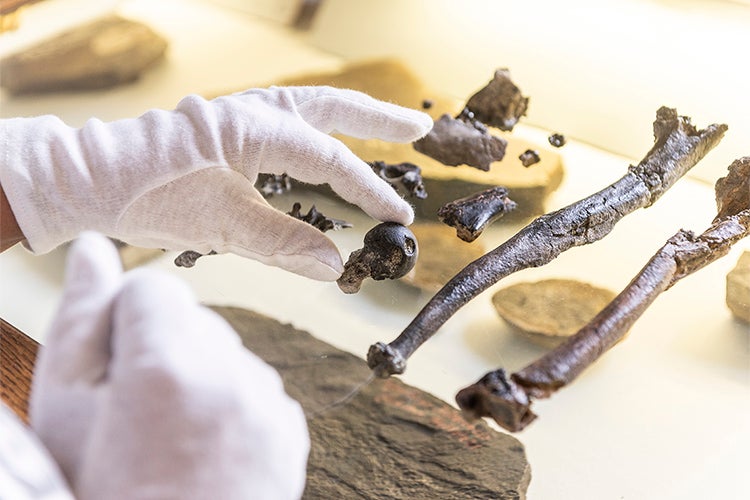 Since the time of Charles Darwin, the early evolution of humans and our cousins, the great apes, has been intensely debated. At the centre of these debates is the question of how humans came to walk on two legs. Did bipedal humans evolve from tree-dwelling, monkey-like apes that moved on all fours? From arm-swinging apes similar to orangutans?  Or from knuckle-walking apes like chimpanzees and gorillas? Over the last 150 years, many hypotheses have been advocated, but supporting fossil evidence has so far been lacking.

“The finds in southern Germany are a milestone in paleoanthropology because they raise fundamental questions about our previous understanding of the evolution of the great apes and humans,” says Böhme, a researcher of terrestrial paleoclimatology at the University of Tübingen’s Senckenberg Centre for Human Evolution and Paleoenvironment.

The Danuvius guggenmosi fossils were discovered between 2015 and 2018. Working in the Hammerschmiede clay pit in the Allgäu region of Bavaria, Böhme and her team excavated more than 15,000 fossil vertebrate bones from the ancient humid and forested ecosystems that were abundant in southern Germany at the time. 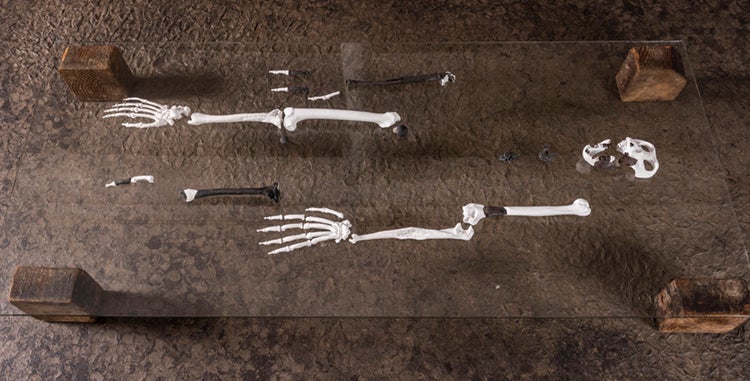 On the basis of the fossils, the team reconstructed other bones (photo by Christoph Jäckle)

The new primate fossils include the remains of at least four individuals. The most complete skeleton, of a male Danuvius, has body proportions similar to modern-day bonobos – a species of great ape found primarily in the Democratic Republic of Congo. Thanks to completely preserved limb bones, vertebrae, finger and toe bones, the researchers were able to reconstruct the way Danuvius moved about in its environment.

“For the first time, we were able to investigate several functionally important joints, including the elbow, hip, knee and ankle, in a single fossil skeleton of this age,” Böhme says. “It was astonishing for us to realize how similar certain bones are to humans, as opposed to great apes.”

The team’s findings indicate that Danuvius could walk on two legs and could also climb like an ape. The spine, with its S-shaped curve, held the body upright when standing on two legs.

The animal’s build, posture and the ways in which it moved are unique among primates.

“In contrast to later hominins, Danuvius had a powerful, opposable big toe, which enabled it to grasp large and small branches securely,” says Professor Nikolai Spassov of the Bulgarian Academy of Sciences, another member of the research team. 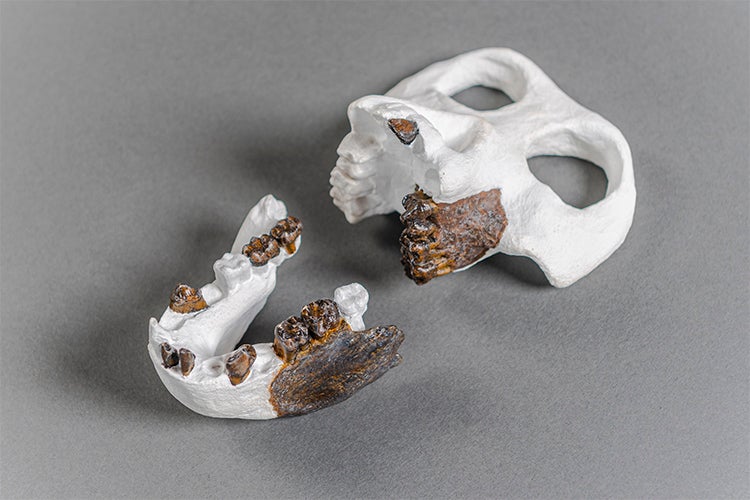 Reconstruction of the skull and lower jaw (photo by Christoph Jäckle)

Danuvius guggenmosi was about one metre in height. Females weighed about 18 kilograms, less than any great ape alive today. The male would have tipped the scales at about 31 kilograms, also at the low extreme of modern great ape body size. The ribcage was broad and flat, and the lower back was elongated; this helped to position the centre of gravity over extended hips, knees and flat feet, as in bipeds. Several key features of human bipedality have been found on bones from the leg.

These results are supported by a recent independent study of a 10 million-year-old ape hip bone found in Hungary.

“That fossil also indicates that the European ancestors of African apes and humans differed from living gorillas and chimpanzees in having a longer, more curved lower back, like humans,” says Begun, who was also involved in the study of the Hungarian fossil.

Begun, who has been unearthing and describing fossil apes from Europe for over 30 years, considers Danuvius to be the most important ape discovery since the very first ape fossil was uncovered in France in 1856.

The researchers note that the ancestors we share with living African apes were as unique as we are today.

“This newly identified pattern of positional behavior helps us to understand the starting point from which African apes and humans diverged,” Begun says.

With files from University of Tübingen