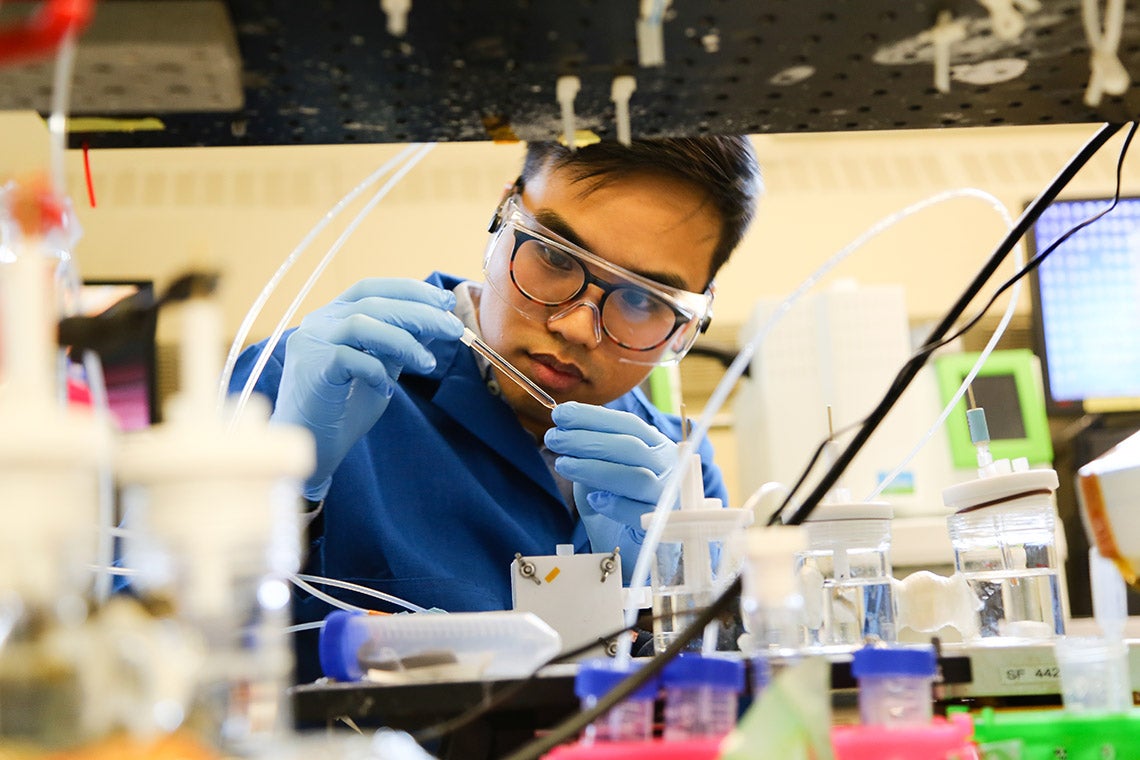 Fossil fuels are the backbone of the global petrochemicals industry, which provides the world’s growing population with fuels, plastics, clothing, fertilizers and more. A new research paper, published last week in Science, charts a course for how an alternative technology – renewable electrosynthesis – could usher in a more sustainable chemical industry and ultimately enable us to leave much more oil and gas in the ground.

Phil De Luna, a PhD candidate in the Faculty of Applied Science & Engineering, is the paper’s lead author. His research involved designing and testing catalysts for electrosynthesis, and last November he was named to the Forbes 30 under 30 list of innovators in the category of Energy. He and his supervisor, Professor Ted Sargent, collaborated on the paper with an international team of researchers from Stanford University and TOTAL American Services, Inc.

Writer Tyler Irving sat down with De Luna to learn more about how renewable electrosynthesis could take the “petro” out of petrochemicals.

Can you describe the challenge you’re trying to solve?

Our society is addicted to fossil fuels – they’re in everything from the plastics in your phone to the synthetic fibres in your clothes. A growing world population and rising standards of living are driving demand higher every year.

Changing the system requires a massive global transformation. In some areas, we have alternatives – for example, electric vehicles can replace internal combustion engines. Renewable electrosynthesis could do something similar for the petrochemical industry.

What is renewable electrosynthesis?

Think about what the petrochemical industry does: It takes heavy, long-chain carbon molecules and uses high heat and pressure to break them down into basic chemical building blocks. Then, those building blocks get reassembled into plastics, fertilizers, fibres, etc.

Imagine that instead of using fossil fuels, you could use CO2 from the air. And instead of doing the reactions at high temperatures and pressures, you could make the chemical building blocks at room temperature using innovative catalysts and electricity from renewable sources, such as solar or hydro power. That’s renewable electrosynthesis.

Once we do that initial transformation, the chemical building blocks fit into our existing infrastructure, so there is no change in the quality of the products. If you do it right, the overall process is carbon neutral or even carbon negative if powered completely by renewable energy.

Plants also take CO2 from the air and make it into materials such as wood, paper and cotton. What is the advantage of electrosynthesis?

The advantages are speed and throughput. Plants are great at turning CO2 into materials, but they also use their energy for things like metabolism and reproduction, so they aren’t very efficient. It can take 10 to 15 years to grow a tonne of usable wood. Electrosynthesis would be like putting the CO2 capture and conversion power of 50,000 trees into a box the size of a refrigerator.

Why don’t we do this today?

It comes down to cost. You need to prove that the cost to make a chemical building block via electrosynthesis is on par with the cost of producing it the conventional way.

Right now there are some limited applications. For example, most of the hydrogen used to upgrade heavy oil comes from natural gas, but about four per cent is now produced by electrolysis – that is, using electricity to split water into hydrogen and oxygen. In the future, we could do something similar for carbon-based building blocks.

What did your analysis find?

We determined that there are two main factors: The first is the cost of electricity itself, and the second is the electrical-to-chemical conversion efficiency.

In order to be competitive with conventional methods, electricity needs to cost less than four cents per kilowatt-hour, and the electrical-to-chemical conversion efficiency needs to be 60 per cent or greater.

How close are we?

There are some places in the world where renewable energy from solar can cost as little as two or three cents per kilowatt-hour. Even in a place like Quebec, which has abundant hydro power, there are times of the year where electricity is sold at negative prices, because there is no way to store it. So, from an economic potential perspective, I think we’re getting close in a number of important jurisdictions.

Designing catalysts that can raise the electrical-to-chemical conversion efficiency is harder, and it’s what I spent my thesis doing. For ethylene, the best I’ve seen is about 35 per cent efficiency, but for some other building blocks, such as carbon monoxide, we’re approaching 50 per cent.

Of course, all this has been done in labs – it’s a lot harder to scale that up to a plant that can make kilotonnes per day. But I think there are some applications out there that show promise.

Can you give an example of what renewable electrosynthesis would look like?

Let’s take ethylene, which is by volume the world’s most-produced petrochemical. You could in theory make ethylene using CO2 from the air – or from an exhaust pipe – using renewable electricity and the right catalyst. You could sell the ethylene to a plastic manufacturer, who would make it into plastic bags or lawn chairs or whatever.

At the end of its life, you could incinerate this plastic – or any other carbon-intensive form of waste – capture the CO2, and start the process all over again. In other words, you’ve closed the carbon loop and eliminated the need for fossil fuels.

What do you think the focus of future research should be?

I’ve actually just taken a position as the program director of the clean energy materials challenge program at the National Research Council of Canada. I am building a $21 million collaborative research program, so this is something I think about a lot.

We’re currently targeting parts of the existing petrochemical supply chain that could easily be converted to electrosynthesis. There is the example I mentioned above, which is the production of hydrogen for oil and gas upgrading using electrolysis.

Another good building block to target would be carbon monoxide, which today is primarily produced from burning coal. We know how to make it via electrosynthesis, so if we could get the efficiency up, that would be a drop-in solution.

How does renewable electrosynthesis fit into the large landscape of strategies to reduce emissions and combat climate change?

I’ve always said that there’s no silver bullet. Instead, I think what we need is what I call a “silver buckshot” approach. We need recycled building materials, we need more efficient LEDs for lighting, we need better solar cells and better batteries.

But even if emissions from the electricity grid and the transportation network dropped to zero tomorrow, it wouldn’t do anything to help the petrochemical industry that supplies so many of the products we use every day. If we can start by electrifying portions of the supply chain, that’s the first step to building an alternative system.