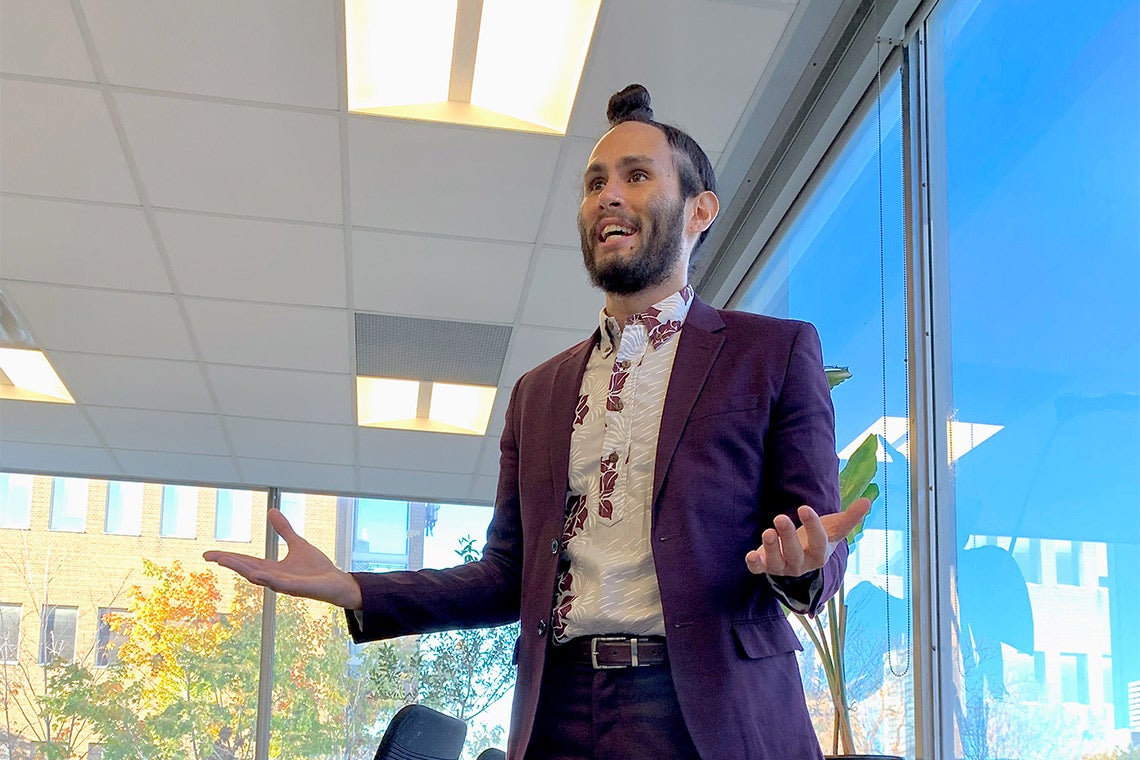 Indigenous Peoples all over the world have endured a common history. And, as Uahikea Maile notes, the experience of “colonial dispossession, territorial enclosure and the subsequent creation of nation states” is not unique to North America.

Global political resistance against the effects of this shared history – which continues to this day – is at the heart of Maile’s recently established research laboratory at the University of Toronto. Known as the Ziibiing Lab, the new Indigenous politics “collaboratory” takes its name from the Anishinaabemowin word for Taddle Creek, a stream that flowed through the land on which U of T sits until the 19th century, when it was buried to create sewage infrastructure for the city.

“The name is an important reference to that waterway, which still exists and resurfaces from time to time,” says Maile, an assistant professor of Indigenous politics in the department of political science in the Faculty of Arts & Science and a noted Kanaka Maoli scholar, activist and practitioner from the Hawaiian island of Oʻahu. “This responds to the Answering the Call report – produced five years ago by U of T in response to the Truth and Reconciliation Commission – which contains a recommendation as part of the Call to Action to create significant dedicated Indigenous space, including a greater recognition of these particular underground waterways here at U of T.” 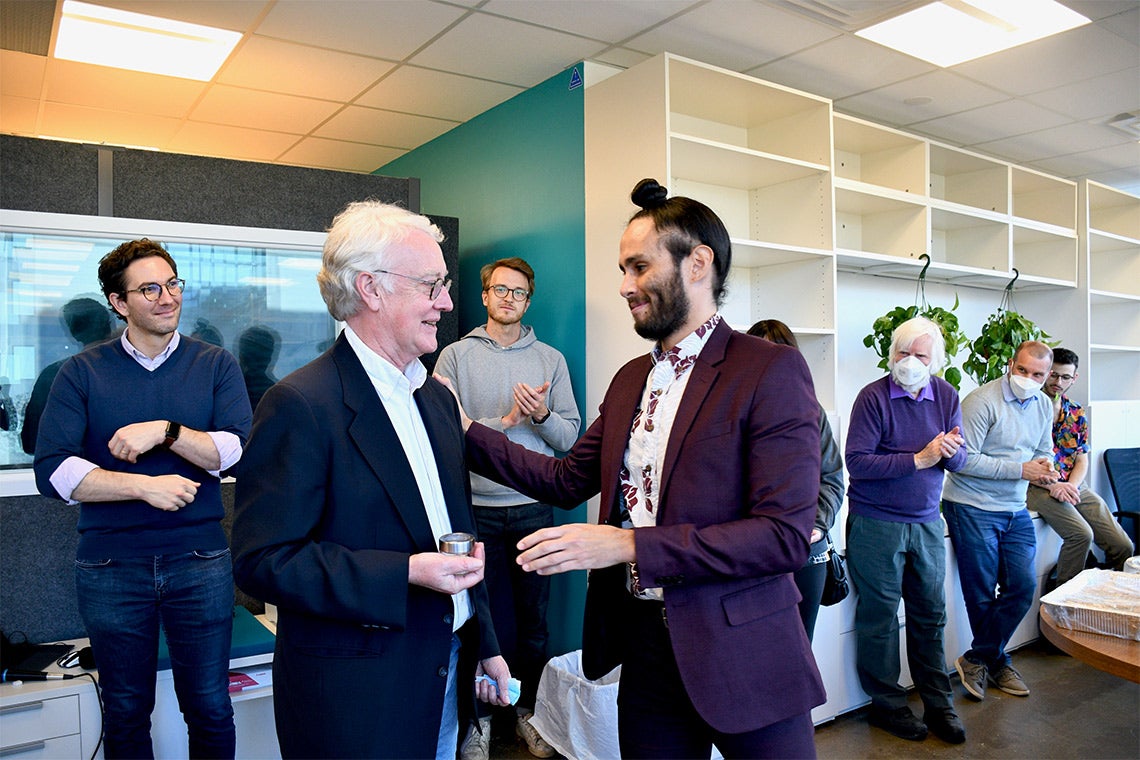 Instead of being driven by one principal investigator who oversees the hiring, strategy and research agenda, the lab is overseen by a nine-member governing council comprising Maile and eight other Indigenous faculty members from the Faculty of Arts & Science.

Ziibiing is highly interdisciplinary, which is important, given the complex nature of Indigenous politics. On its governing council, there are representatives from not only political science but geography, history, religion and English.

Maile wants to support researchers in their own pursuits, which is why Ziibiing provides training in knowledge mobilization. In addition to generating reports and briefs – and training participants on how to apply for grants and observe proper research protocols – the lab boasts its own vocal booth where researchers can record podcasts, oral histories and interviews. One of the latter is already available: REDsurgence, a series of thought-provoking conversations hosted by Anishnaabe journalist and speaker Riley Yesno, a PhD candidate in political science.

A quick scan of research projects underway at Ziibiing highlights its international outlook. Post-doctoral researcher Sardana Nikolaeva is preparing a report on diamonds and Indigenous politics in Russia’s Sakha Republic. Yojana Miraya Oscco is developing a new podcast as part of her dissertation research concerning Andean Indigenous political thought and resistance to extractivism in Latin America. Post-doctoral researcher Karl Gardner is working on Indigenous deportation and anti-deportation in Canada and Australia and Yesno – who is a research assistant at Ziibiing – is examining the land back movement across Canada.

Maile’s own personal research exemplifies the collaboratory’s transnational aspect. For many years he’s been monitoring and challenging the proposed construction of the Thirty Meter Telescope, an international project to build a large-scale telescope in Hawaiʻi on Mauna Kea. Mauna Kea is one of the most sacred dormant volcanoes in Native Hawaiian religion and culture; Maile and others who’ve been opposing the telescope’s planned construction cite not only its threat to territorial sovereignty, but to aquifers and local biodiversity.

“My research considers the kind of transnational ways not just nations, but institutions and corporations, have become entangled in global forms of dispossession of Indigenous Peoples’ territories and ongoing occupation,” he says.

He adds that research is the ground from which action arises – action that is best taken as part of a collective. “Coming here to U of T, that’s how I treat my Indigenous students from all over the world. They’re not just individuals, they are representatives of their nations and their communities.” 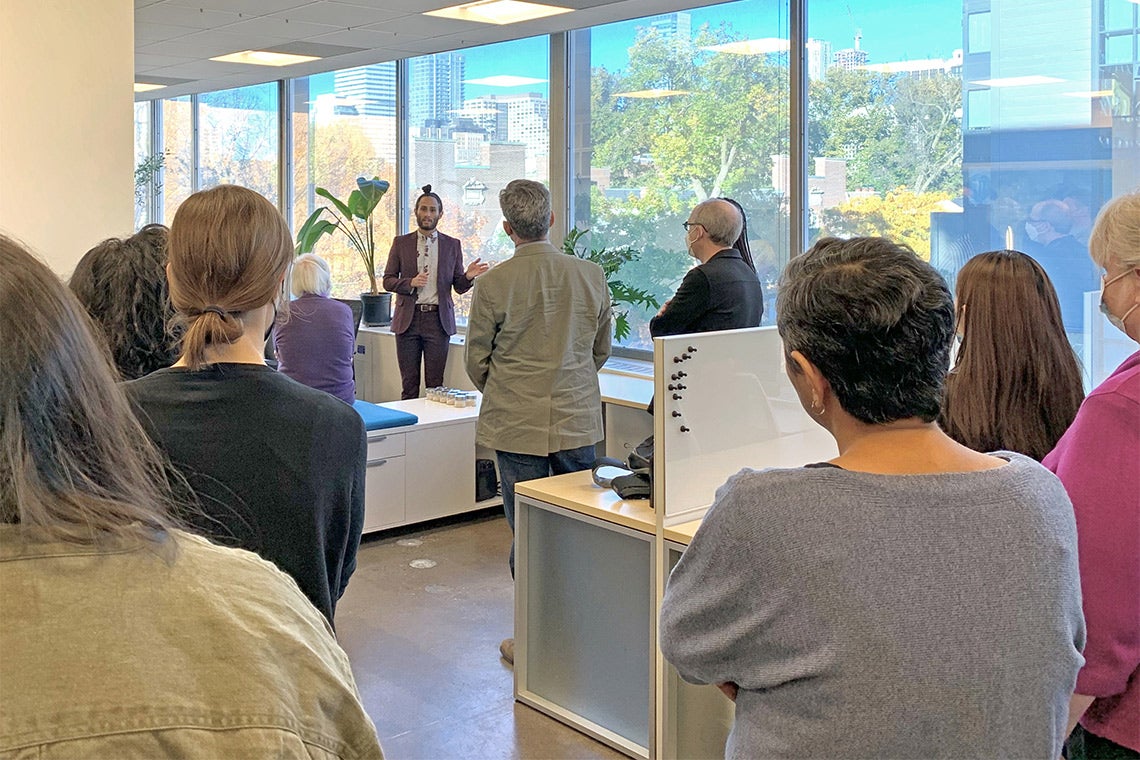 The lab, shown here at its launch in October, produces community-based research with an international outlook (photo by Diana Tyszko)

They are also linked to the communities around the world, whose concerns and philosophies they often share. In discussing responsibilities to Indigenous Peoples around the world, Maile invokes two Hawaiian concepts. One is kuleana, or the obligation to care for the land and the place you are in. The other is kulana, which involves using one’s power and position for the betterment of the collective.

“Leaving home was not something that I desired as a child, but it became a way for me to walk in my ancestors’ footsteps,” Maile says. “Some left Hawaiʻi to secure international treaties that then bestowed international forms of recognition on the Hawaiian Kingdom. And they also left Hawaiʻi to lobby the United States congress when the annexation treaty was defeated in 1897.

“So Hawaiian internationalism is a tradition of our community and I’m taking and carrying that mantle not only in my educational pursuits, but also in my work here at U of T. This is why we say that Indigenous Peoples do not just concentrate on understanding the political forms of sovereignty in the communities where we live: as Indigenous Peoples, we are sovereign peoples no matter where we go.”