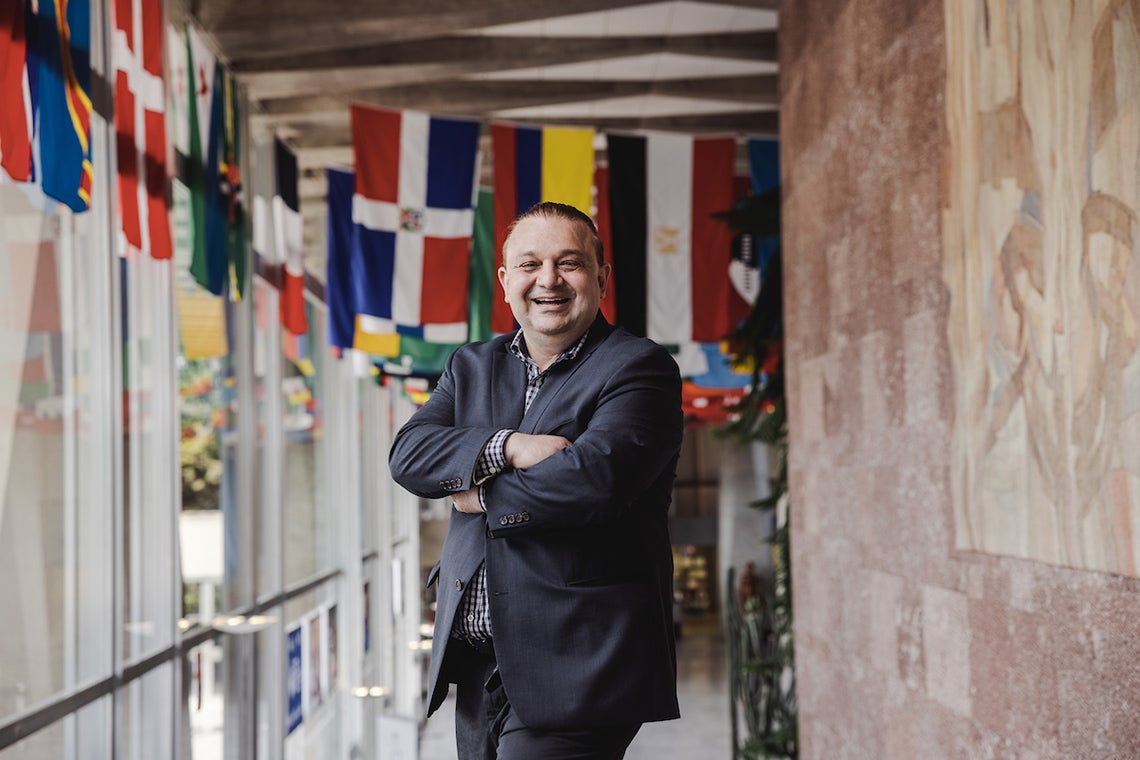 Garry Aslanyan, of the Dalla Lana School of Public Health, drew on his experience working with the World Health Organization and for the Canadian government to co-found a course in global health diplomacy (photo by Niels Ackermann)

While working with national governments and international agencies, University of Toronto public health researcher Garry Aslanyan always asks: What does this mean for the health of a person?

It’s a question that can easily get lost in Geneva and New York, where diplomats are known to spend hours negotiating a single word in a resolution.

Throughout his career working in every layer of Canadian government and now in Switzerland with the World Health Organization (WHO), Aslanyan says he never forgot the lessons he learned from his mother, who worked at a hospital medical laboratory in his home country, Armenia. “I grew up hearing stories of the hospital and visiting her there,” says Aslanyan, an adjunct professor at the University of Toronto's Dalla Lana School of Public Health who co-founded a course in global health diplomacy at U of T. “The stories about individual patients always motivated me.”

That focus on the individual also informs his lifelong interest in equity – learned during a childhood behind the Iron Curtain.  “Soviet health systems may not have been the greatest, but they were more equitable in terms of health delivery,” Aslanyan recalls. “Everybody had access to care. I don’t romanticize anything about the Soviet era, but I have always thought if they could offer universal care, the West has no excuse.”

Aslanyan was 17 and overjoyed when the Berlin Wall fell, foreshadowing the collapse of the Soviet Union. “I felt freedom to become more part of the world,” he says. He became a dentist, and eventually moved to Toronto with his family, studying political science, public health, dental public health and health policy at U of T.

“Growing up on ‘the other side’ during a terribly polarized time for our planet, I learned how to see the world through very different lenses,” recalls Aslanyan. “It was great training for the art of negotiation, which is all about seeing a problem through your partner’s eyes.”

After many years negotiating on behalf of Canada on the world stage through agencies such as Global Affairs Canada and the Public Health Agency of Canada, Aslanyan decamped to the World Health Organization in 2009 – curious about the “other side” of diplomacy.  From his new global vantage point, he was surprised at the world’s inertia toward public health.

“Many governments don’t understand how important it is to be involved in a worldwide public health strategy,” he says. “Perhaps with the pandemic, it’s an opportunity for them to see it. Perhaps we won’t miss that opportunity next time – and this includes Canada.”

He also saw the need to educate public health practitioners in the often opaque ways of diplomats – and vice versa. That led him to help develop Dalla Lana's executive course on global health diplomacy, which Aslanyan teaches alongside Erica Di Ruggiero, an associate professor and director of Dalla Lana's Centre for Global Health.

The pair first met 20 years ago, when they were both working on global health issues for different Canadian agencies.

“Right away, I was impressed by Garry’s pragmatism,” says Di Ruggiero. “He cared about relationships and equity, but he also had a realistic sense of how to compromise to get results. Watching him negotiate so expertly, I wasn’t surprised that he later argued for an executive course on global health diplomacy.”

Fast forward to the present, and Di Ruggiero says, “I’m thrilled to have him sharing these skills with our students.”

The school's global health diplomacy course launched online last November with 25 students from Canada and around the world. Students are a mix of professionals working in public health systems at all levels in Canada and internationally. Five spots are reserved for students from low- and middle-income countries in a bid to remove barriers to entry and ensure different perspectives are brought to the course.

“We have a health attaché from the Ghanaian mission in Geneva and someone working for the United Nations in Cameroon,” he says. “I’m very proud of this course. There’s definitely a need for this training, although I feel you can only get so much from training versus direct experience.”

The course tackles vaccine equity, and how Canada can contribute to a more equitable global distribution of COVID-19 vaccines; climate change and health; global universal health coverage negotiations and agreements; and global emergency preparedness and responses to international pandemics. Students are learning how treaties and regulations are hammered out in real time.

“Global health diplomacy is a relatively new term,” says Aslanyan. “It starts when someone puts you in a seat and says it’s your turn. Suddenly you experience the pressure of speaking on behalf of a whole country. Those of us who go from public health into diplomacy, you need to quickly learn the rules of the game – and they are often not what you think they are.”

Understanding and working amid complexity is a primary skill – and it’s important to also speak the language of finance ministers, who are often the players negotiating donations of vaccines, for example.

During the Cold War, global health suffered from polarization, which tended to oversimplify complicated health issues as countries coalesced around one side or the other.

“There were two views on everything, and the only thing they agreed on was the eradication of smallpox,” Aslanyan says of the WHO during those times. “It was not helping global health. The world is a very different place now. We can look at things from multiple points of view. Many countries now have an interest in getting involved. Our understanding of various points of view has evolved so much.”