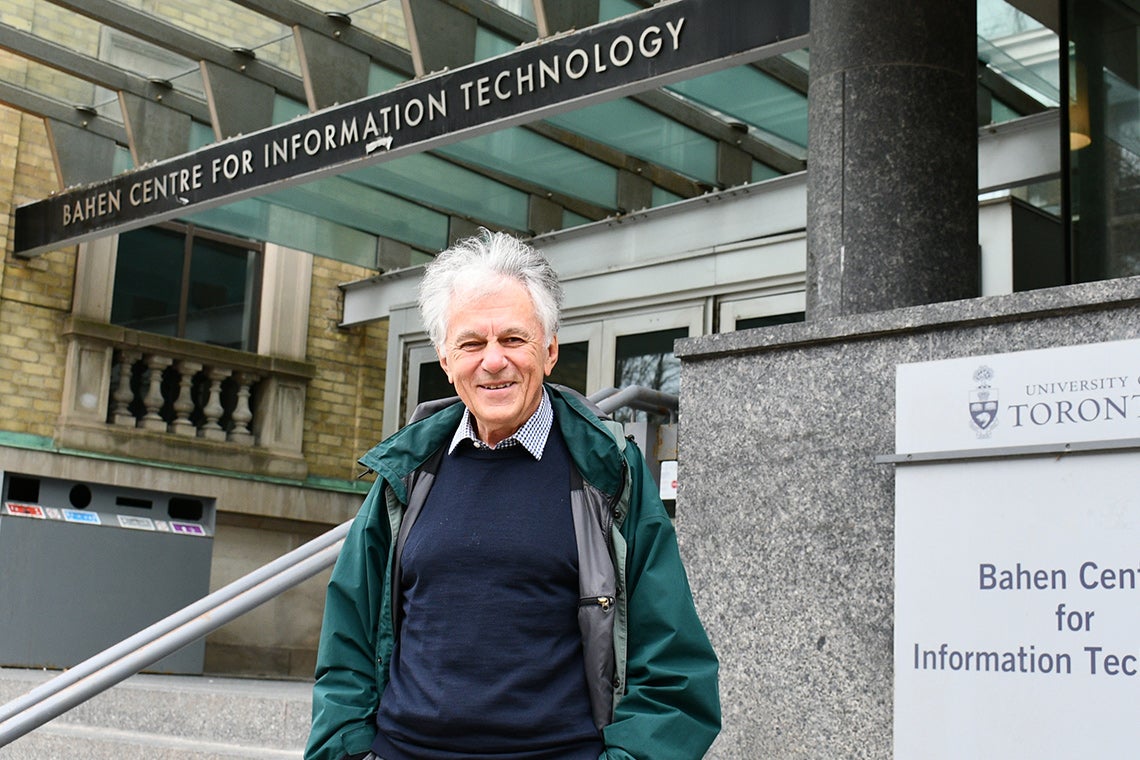 Over a 30-year career at U of T, Professor Emeritus Velimir Jurdjevic helped shape the world’s understanding of geometric control theory and regulated feedback systems – concepts underlying a range of modern technologies (photo by Diana Tyszko)

Math has transported Velimir Jurdjevic to new and exciting realms.

“I often think of math as a ladder. With each proof and mathematical concept explored, you climb up a rung higher,” says Jurdjevic, a professor emeritus in the department of mathematics in the University of Toronto’s Faculty of Arts & Science.

“Eventually, when you’ve climbed up enough, you reach a place of ideas. There, you can make sense of things beyond the physical world. You can throw away the ladder, and you won’t fall.”

He is hoping the newly established Velimir Jurdjevic Graduate Scholarship in Mathematics will help students reach such heights. As an endowed gift, the award is designed to have a lasting impact. Beginning this fall, the scholarship will be awarded annually, on the basis of academic merit, to a promising full-time graduate student in the department of mathematics.

In a career spanning more than 30 years at U of T, Jurdjevic contributed significantly to mathematics by shaping the world’s understanding of geometric control theory and regulated feedback systems – the underlying concepts that make robotics, autonomous vehicles and aerospace engineering technologies possible.

The new graduate scholarship could support emerging scholars in making their mark in math, which could drive the development of new technological applications or enhance the public’s understanding of the universe.

After all, Jurdjevic points out there’s no shortage of talent at U of T.

“I was fortunate enough to teach some very important graduate courses and honours undergraduate courses at U of T, and that put me in touch with some of the brightest minds,” he says. “I enjoyed the intellectual intensity. Our graduate students were not afraid to ask questions and challenge their professors. I know they brought out the best in me.”

Similarly, many of Jurdjevic’s former students credit him for inspiring them to pursue mathematics and other intellectual curiosities.

“Velimir Jurdjevic drew me into the mathematical world of geometry with the first lecture in my first class in the department of mathematics. It was absolutely thrilling,” recalls Dror Varolin, who met Jurdjevic as a third-year engineering sciences student at U of T.

Varolin, now a professor in mathematics at Stony Brook University, wrote his undergraduate thesis under Jurdjevic and served as his teaching assistant. He recalls Jurdjevic’s challenging exams and puzzling brainteasers – and says that his former professor’s compassion and genuine interest helped students succeed.

“In my own academic career, I have tried to imitate him as best I can,” Varolin says. “With each passing year my admiration for him, significant as it was from the very start, continues to grow.”

Jurdjevic says establishing the scholarship is a fitting way to pay tribute to the community that supported him.

“It’s been a privilege to build a career at the University of Toronto,” he says. “It’s a place where I was allowed to follow my academic interests freely and where I became connected to a wonderful academic community.”

This gift is also a way for him to bring his story full circle.

“If it hadn't been for a fellowship that I received, I don't think I would have been able to go to graduate school,” he says. “I hope this award reaches graduate students who have developed a love for the subject. I’d like them to have a bit more free time to pursue their passions.”