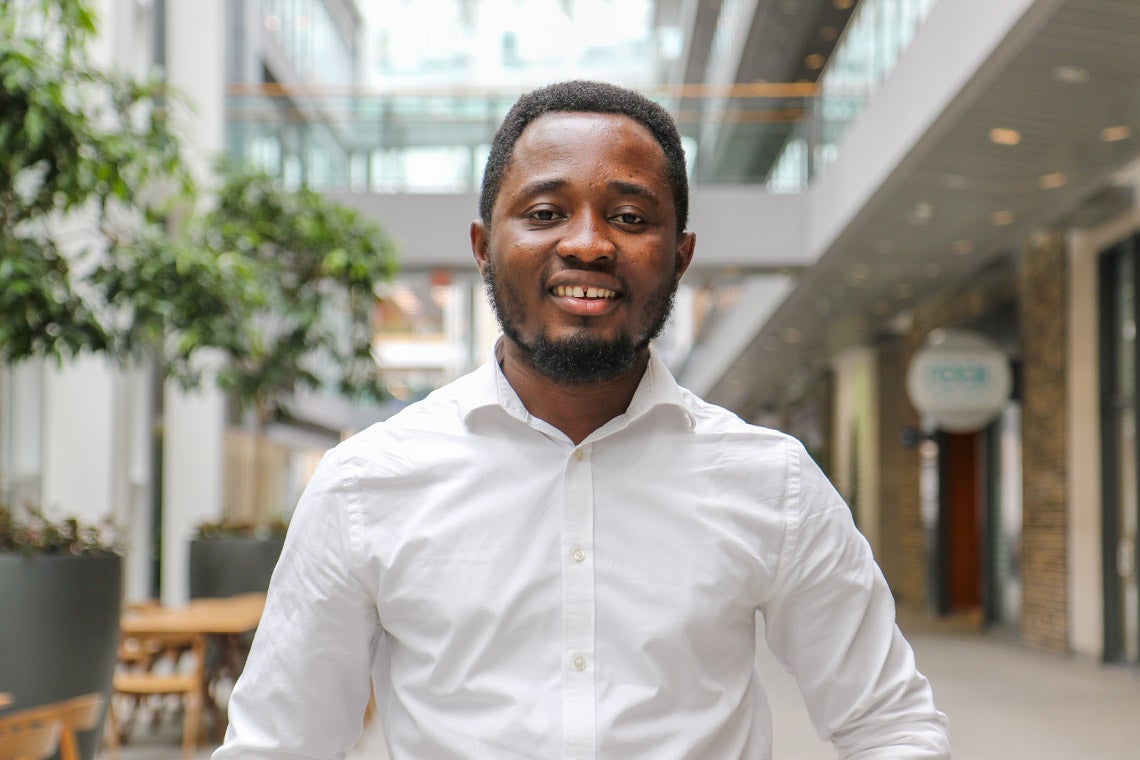 Growing up in Nigeria, one of Chidozie Ojobor’s most visceral memories was the death of his older sister, Ginika, who died of typhoid fever in 1999.

“Her death caused me to want to understand what typhoid meant, the organism that caused the disease, how it was disseminated and so on,” says Ojobor, who would go on to study microbiology at the University of Nigeria.

His curiosity about infectious diseases became a passion, and his master’s education led to the study of phage therapy – using viruses to treat bacteria.

In particular, he uses “tailocins” – built from parts of viruses – to defeat the bugs.

“Thinking that my sister may have been infected by a resistant strain that wouldn't bow to antibiotics that were administered to her got me more interested in phage therapy,” says Ojobor, a PhD candidate in the lab of Alan Davidson, a professor of molecular genetics in the Faculty of Medicine.

Ojobor set out to understand the molecular processes of disease, with an interest in diagnosis and how diseases metabolize in the body.

His drive to combat infectious disease and, subsequently, superbugs, got the attention of MPOWER Financing, a Washington, D.C.-based company that offers loans to international students. Ojobor was named one of four winners of their Global Citizen scholarship this past spring.

He is the first Canadian university student to win the scholarship. He was picked by MPOWER staff out of 1,121 eligible applications – which they cite as a record number of applicants.

The $5,000 scholarships were awarded on the strength of applicants' essay submissions. Ojobor’s submission identified the need to address the threat of superbugs.

“Antibiotic-resistant bacteria, if left unchecked, would cause 10 million deaths yearly, worldwide, by 2050 [according to a CDC report]. So, there is great need to search for alternatives to the conventional antibiotics,” he wrote. “In the last 3 years of my PhD in Canada, I have identified novel bacteria-killing entities, called tailocins, which I have successfully used to kill resistant bacteria, in the laboratory. Interestingly, in any case that the bacteria then develop resistance, I can genetically engineer the tailocins to overpower the resistant superbugs.”

With tailocins, Ojobor has been able to kill antibiotic-resistant bacteria in the lab. Ojobor’s hope is that he can genetically engineer them to overpower superbugs as cases arise – with treatments in the form of pills and other therapies.

“That, for me, is a high point of the research – that we are able to keep up with that [antibiotic] resistance,” says Ojobor, who joined Davidson’s lab in 2015. “The potential for the research is great and is, for me, really interesting.”

Davidson is full of praise for Ojobar, who he says is "a higly appreciated member of our group.

“Chidozie is a very motivated student with a strong drive to make a difference with his research. He is making important discoveries,” says Davidson, whose lab focuses on antibiotic-resistant bacteria and phage therapies. “He also is a wonderfully warm and engaging person.”

Ojobor is thankful to be named a scholarship winner. He is also grateful for his professor, who has been “super supportive” since he arrived at U of T.

“I think about him as that person who is pivotal to my success,” says Ojobor. “He’s led me in the right direction. We’ve had a great relationship.”

As Ojobor’s education nears its end next year, he is thinking about what to do next with his research. He is leaning towards a public health focus, applying his work to developing countries like Nigeria. He is also considering starting a company “to see how we can take what we are already doing now in the lab and take it to the next level.”

Ojobor is happy to be funnelling his passion into something about which his sister would be proud.

“I feel great and encouraged that I am contributing to this field and, one day, [will] prevent many young and promising Ginikas from dying from resistant bacteria.”