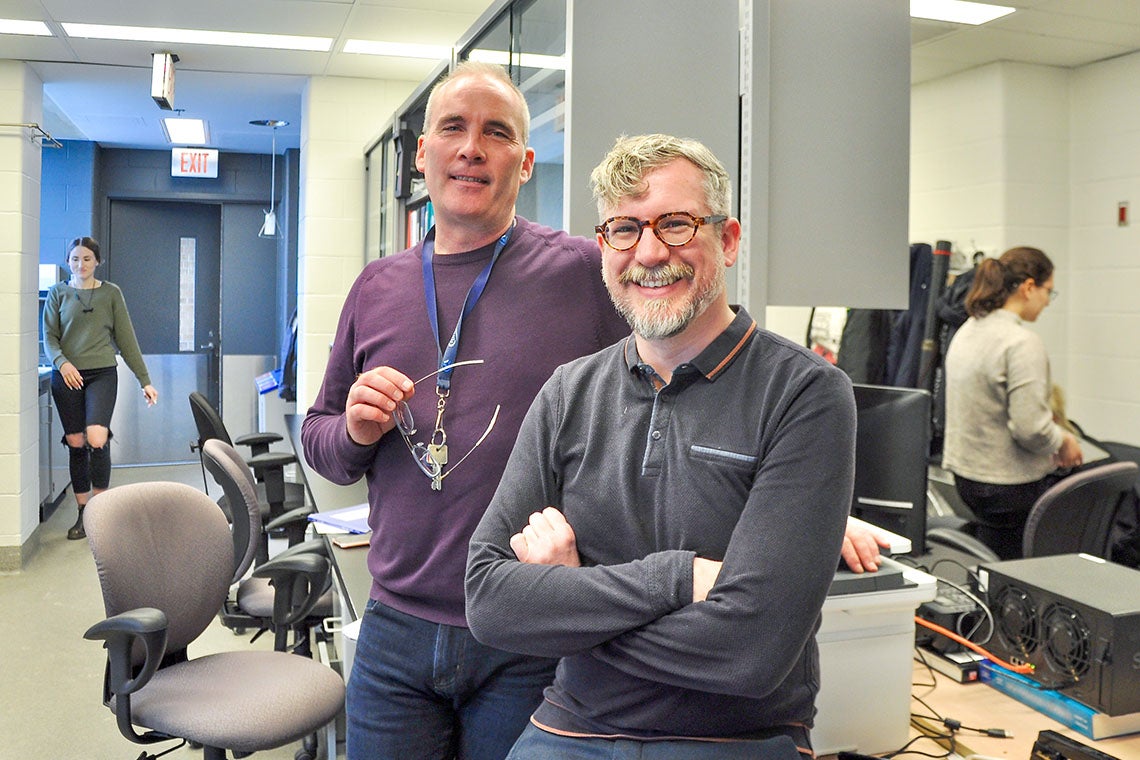 John Peever, a neurobiologist in the department of cell and systems biology, and research associate Jimmy Fraigne hope their research could lead to treatments for a variety of muscular disorders (photo by Diana Tyszko)

In a YouTube video with nearly 12 million views, a young woman stands facing the camera, giving a dance lesson. Mid-sentence, her legs buckle and she collapses to the floor. She sits upright groggily but seconds later, her upper body and head slump forward and she lies motionless. After a few seconds, she sits upright, eyes open, but struggles to remain vertical. She slumps back against the wall, shakes her head and tries unsuccessfully to stand.

As explained in the captions that accompany the video, the woman suffers from narcolepsy with cataplexy. Narcolepsy is a sleeping disorder characterized by excessive sleepiness or the uncontrolled onset of sleep; it’s often accompanied by cataplexy, a complete loss of muscle control or muscle tone. It’s cataplexy that caused the woman’s legs to give out from under her even though she was awake; it was narcolepsy that put her to sleep seconds later.

Unless you suffer from cataplexy, you probably aren’t aware of how the muscle tone present in your body affects you. A moderate amount of muscle tone is normal and necessary. As the video illustrates, it keeps us from falling when we’re standing, keeps us upright when we sit and is even keeping your head vertical as you read this.

There are also times when a complete lack of muscle tone is normal and necessary. During rapid eye movement (REM) sleep, its absence paralyzes us, thereby preventing us from flailing our arms and legs as we dream we’re swimming or riding a bicycle.

John Peever, a neurobiologist in the department of cell and systems biology (CSB) in the Faculty of Arts & Science, studies how the intricate circuitry of the brain orchestrates muscle tone with our state of arousal to ensure our muscles are doing what they’re supposed to be doing when we’re asleep and awake.

Peever and a team of collaborators recently conducted an experiment demonstrating that the area of the brain called the sublaterodorsal tegmental nucleus, or SLD – already known to induce muscle paralysis during REM sleep – can also trigger cataplexy.

“We manipulated the SLD in the brains of mice which allowed us to turn this circuit on or off,” says Peever. The researchers showed that when the SLD was deactivated, mice moved normally. When the SLD was activated, the mice became cataplectic – meaning they became completely immobile even though they were awake.

“Our experiment was the first clear demonstration that this area of the brain causes cataplexy,” says Peever. “It showed that the SLD has the capacity to decouple brain state and muscle tone during wakefulness.”

“It was remarkable to see how altering the activity of such a tiny brain area changed the normal behavior of healthy mice,” says Peever. “After watching these experiments, we realized that we had opened a window into how the brain functions in cataplexy. It’s one thing to have an idea about how the brain functions, but it’s an entirely different thing to see it live in action.”

Peever and his collaborators, including CSB research associate Jimmy Fraigne and colleagues from U of T’s departments of physiology and medicine in the Faculty of Medicine, published the results of their experiment in the journal Current Biology last fall.

Peever hopes the research could lead to treatments for patients experiencing a variety of muscular disorders. For example, patients with cerebral palsy can experience uncontrollable shaking; babies with a genetic disorder called hyperexplexia become paralyzed when they hear a loud, sudden noise.

As well, the muscles of Parkinson’s patients are in a continual state of rigour, making everyday activities like climbing stairs or getting into bed virtually impossible.

“Now that we’ve found that this circuit in the brain switches muscle tone on and off, that makes us think: Wouldn’t it be wonderful if we could come up with a ‘volume control’ for the SLD in Parkinson's patients that allowed us to set muscle tone at just the right level? At least, that’s my dream.”

Cell and Systems BiologyFaculty of Arts & ScienceFaculty of MedicinePhysiologyResearch & Innovation