U of T mourns the death of Queen Elizabeth II, lowers flags to half-mast 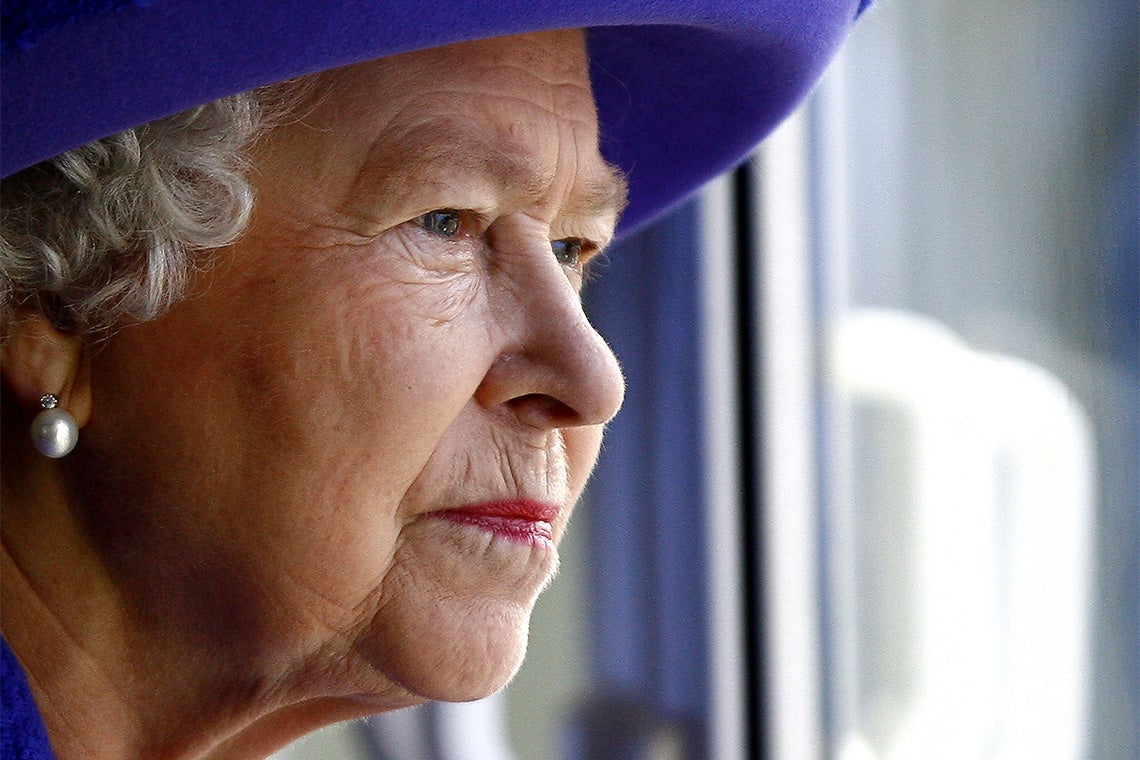 Her Majesty Queen Elizabeth II, who died at the age of 96, was the longest-serving monarch in British history (photo by Tim Graham/Getty Images)

The University of Toronto is mourning the death of Her Majesty Queen Elizabeth II, the longest-serving monarch in British history, who visited the university on numerous occasions.

Flags on all three U of T campuses are being lowered to half-mast in memory of the Queen, who died Thursday at Balmoral Castle in Scotland at the age of 96. They will remain at half-mast until the day of her state funeral.

The university will also mark the event by having carillonists play the bells in Soldiers’ Tower on Friday at noon, tolling the largest bell once for each year of the Queen’s age at the time of her passing. The royal anthem and O Canada will also be played.

U of T President Meric Gertler said the U of T community joins all Canadians in mourning the loss of the sovereign, noting that, before acceding to the throne, she promised to devote her life to the service of her people.

“She fulfilled that promise with unparalleled grace and dignity, and in so doing set a magnificent example for us all,” President Gertler said in a statement. “Her unfailing devotion to duty has been a constant source of strength and continuity for generations of Canadians as well as countless others around the world.

“Indeed, it is difficult to imagine a world without her.” 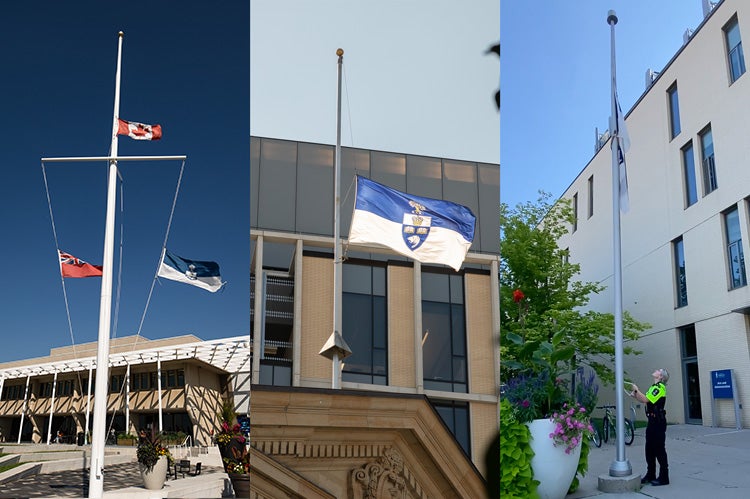 Flags fly at half mast at, from left to right, U of T Mississauga, St. George and U of T Scarborough to mark the Queen’s death on Sept. 8, 2022 (photos by Nick Iwanyshyn, Johnny Guatto and Raquel Russell)

He also highlighted the Queen’s contributions to international peace and solidarity through the Commonwealth and noted the U of T community has been enriched by the contributions of students, faculty, librarians, staff and alumni who arrived from or live in fellow Commonwealth countries.

“In tribute to Her Majesty, in this time of sadness and in the years to come, let us remember and learn from her life of dedicated and extraordinarily generous service to others, and give thanks for a life very well lived.” 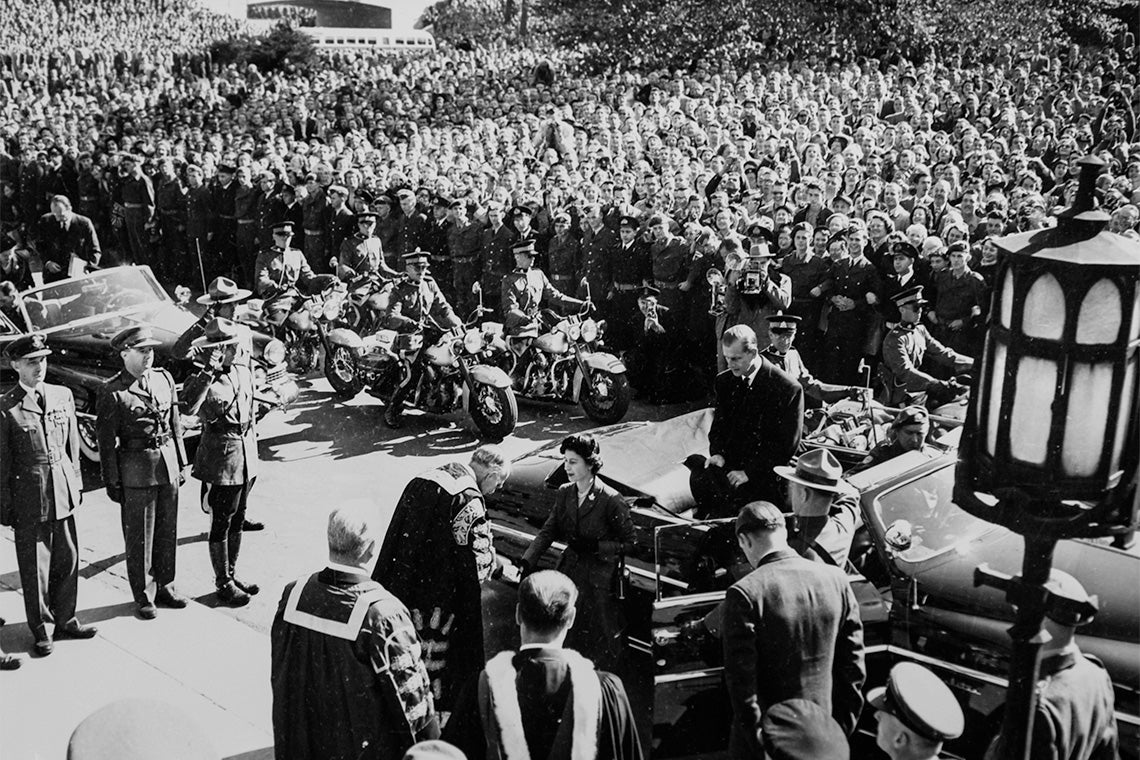 Princess Elizabeth and the Duke of Edinburgh are greeted at Hart House by U of T Chancellor Vincent Massey (Walter F. Mackenzie/University of Toronto Archives)

The Queen’s passing comes 14 months after her husband Prince Philip, the Duke of Edinburgh, died aged 99. 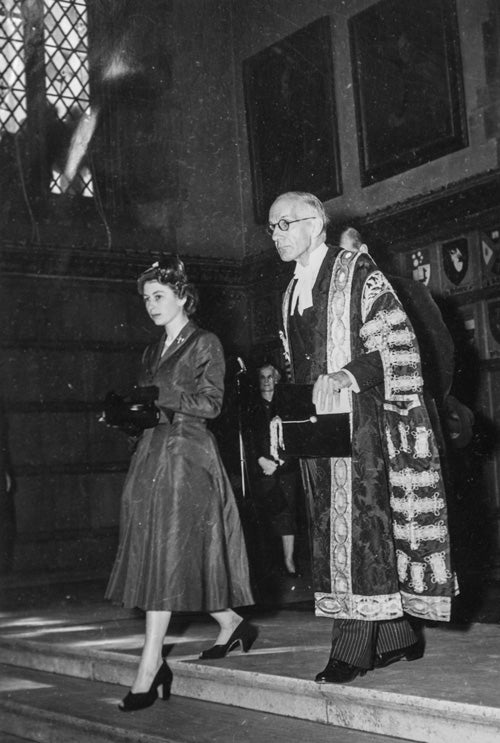 Prime Minister Justin Trudeau said that it is with the “heaviest of hearts” that Canadians learned of the passing of the country’s longest-reigning sovereign.

“For most Canadians, we have known no other Sovereign. Queen Elizabeth II was a constant presence in our lives. Time and again, Her Majesty marked Canada’s modern history,” he said in a statement.

Born Elizabeth Alexandra Mary on April 21, 1926, Queen Elizabeth II ascended to the crown in 1952 at age 25. She went on to become the longest-reigning monarch in British history, marking her Platinum Jubilee this past February.

She is to be succeeded as monarch by her eldest son Charles, Prince of Wales – now King Charles III.

David Onley, former lieutenant governor of Ontario and a senior lecturer in the department of political science at U of T Scarborough, said he has warm recollections of meeting the Queen at Buckingham Palace in 2008.

“The experience my wife and I had was quite amazing to us in that the conversation was not superficial. The Queen really engaged in our conversation,” Onley said.

He added that the Queen took great interest in the results of Canada’s federal election, which had taken place the night before. “I was really quite amazed as to how well-briefed she was. She wanted to know about Stephen Harper, she wanted to know about why the Liberals had lost so badly on that occasion – so it wasn’t just a superficial chit-chat.

“At the same time, I would say that she interacted with everybody like that – and that was one of the fundamental reasons for her passing being felt by so many people. Because everybody has stories – if you met the Queen, you had a story – and that was because of her degree of engagement.”

Onley said the Queen’s impeccable reputation during her seven-decade reign – he noted that her first prime minister was Winston Churchill and her last, the recently elected Elizabeth Truss; and that she had met all but one of the U.S. presidents since the Second World War – was testament to her complete devotion to the role.

“This is a particular accomplishment, and you would not have that kind of reputation if you were just effectively mailing in the responsibilities,” Onley said. “She saw it as a lifetime of service and executed that service right to the very end.”

He added that the frequency and range of the Queen’s visits to Ontario and Canada “give you the sense of the degree of interest that she had in this province, and other provinces as well.” Queen Elizabeth II attends the Festival of Ontario at the CNE in 2002, making a stop in front of the U of T Blue Sky Solar Racing Team’s display (photo via Flickr)

Queen Elizabeth II and the Duke of Edinburgh visited Toronto seven times, with their first visit taking place in 1951, four months before the Queen’s coronation. On that occasion, the royal couple were driven to the steps of Hart House, where they waved to cheering crowds and posed for photos.

In 1973, the Queen returned to Toronto and laid the cornerstone for the new Mount Sinai Hospital, part of Sinai Health and one of U of T’s partner hospitals. The hospital is located next to Princess Margaret Cancer Centre, named in honour of the Queen’s sister.

In 2002, the royal couple visited Toronto again during the Queen’s Golden Jubilee, which coincided with U of T’s 175th anniversary. During the celebrations, the Queen visited a U of T display where she spoke with undergraduate students from the Blue Sky Solar Racing team who were present with their solar-powered car.

“I recall that the Queen had such a presence,” said Nicolle Wahl, director of content in U of T Mississauga’s Office of Communications, who was present at the U of T display. “[She was] very warm and curious – and it was wonderful to see how excited the students were to meet her.” 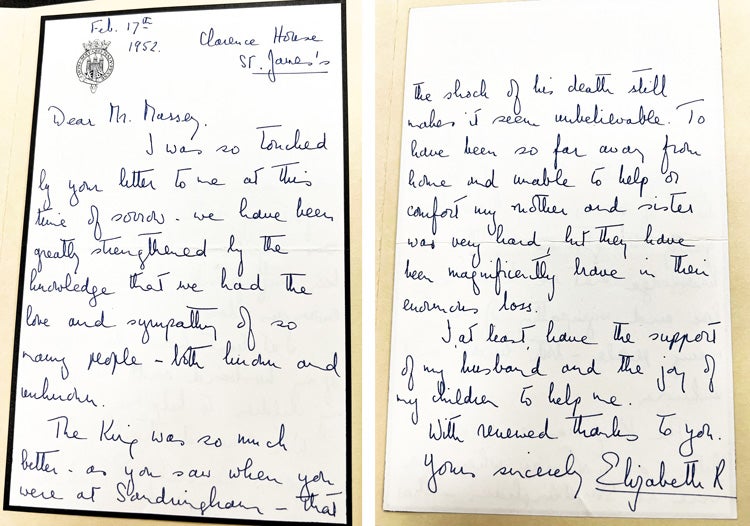 A letter written by Princess Elizabeth to U of T Chancellor Vincent Massey dated Feb. 17, 1952 (photo by Larysa Woloszansky)

The Queen’s 22nd and final tour of Canada took place in 2010 and included a visit to Queen’s Park – named in honour of her great-great-grandmother Queen Victoria and located amid U of T’s St. George campus – where she presented Ontario Medals for Good Citizenship and waved to thousands of cheering well-wishers.

The Queen’s impact on U of T did not end with her last visit to Toronto, however. In 2017, Massey College announced that the Queen agreed to designate the college’s St. Catherine’s Chapel as the third Chapel Royal in Canada, which made it the first interdenominational Chapel Royal in the country.The request for the designation was made by John Fraser, then the master of Massey College, with the support of the Mississaugas of the New Credit First Nation. It was inspired in part by the Truth and Reconciliation Commission of Canada’s Calls to Action. 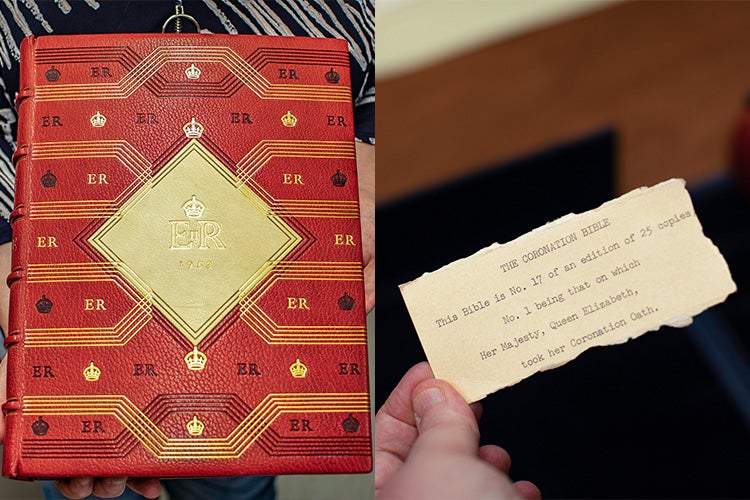 The Queen’s ties with Massey College can be traced back to her close relationship with the college’s founder Vincent Massey, who was Canada’s 18th Governor General and a U of T chancellor from 1947 to 1953.

Letters written by the Queen to Massey – and preserved at U of T’s Thomas Fisher Rare Book Library – speak to a warm personal rapport.

In one letter dated February 1952, the Queen responded to a letter of condolence sent to her by Massey upon the passing of her father, King George VI. In her letter, the Queen expresses her gratitude for Massey’s condolences and notes that her father was in much better condition when Massey had last met him, but had then taken a turn for the worse. The Queen also states her regret at the fact that she was on a tour in Africa when her father died and was saddened by not being able to be home to comfort and console her mother and sister.

Another letter written from Balmoral Castle – where the Queen would eventually take her last breath – thanked Massey for being a great governor general. In another letter to Massey, written from Buckingham Palace in 1957, the Queen recounts her visit to the United States. 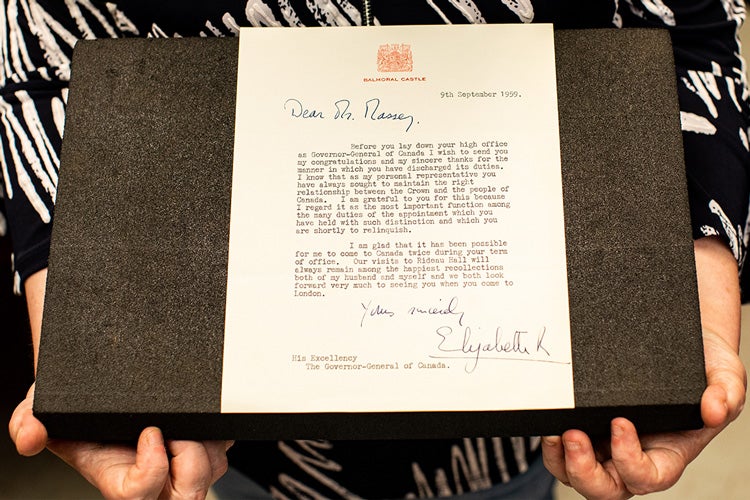 The Thomas Fisher Rare Book Library is also in possession of one of 25 souvenir Bibles created to mark the Queen’s coronation in 1953. Bible #1 was used for the coronation ceremony – the Queen gifted Bible #17 to Massey.

Randall Hansen, professor in the department of political science in the Faculty of Arts & Science and the director of the global migration lab at the Munk School of Global Affairs & Public Policy, said the Queen’s many accomplishments include overseeing a modernization of the monarchy – noting as examples her decision to agree to pay income tax and the landmark wedding of Prince Harry and Meghan Markle.

“Leaving aside how it all ended, the marriage of Meghan Markle and Prince Harry was a moment of a highly modern monarchy – an inter-racial marriage and a Black Baptist American minister who oversaw the service.”

He added that the Queen’s son and heir to the throne will benefit from the prestige of the monarchy and the Queen’s impact on the institution.

Hansen said it was remarkable that Queen Elizabeth II, over the course of an extraordinarily long reign, was not embroiled in a scandal of any significance.