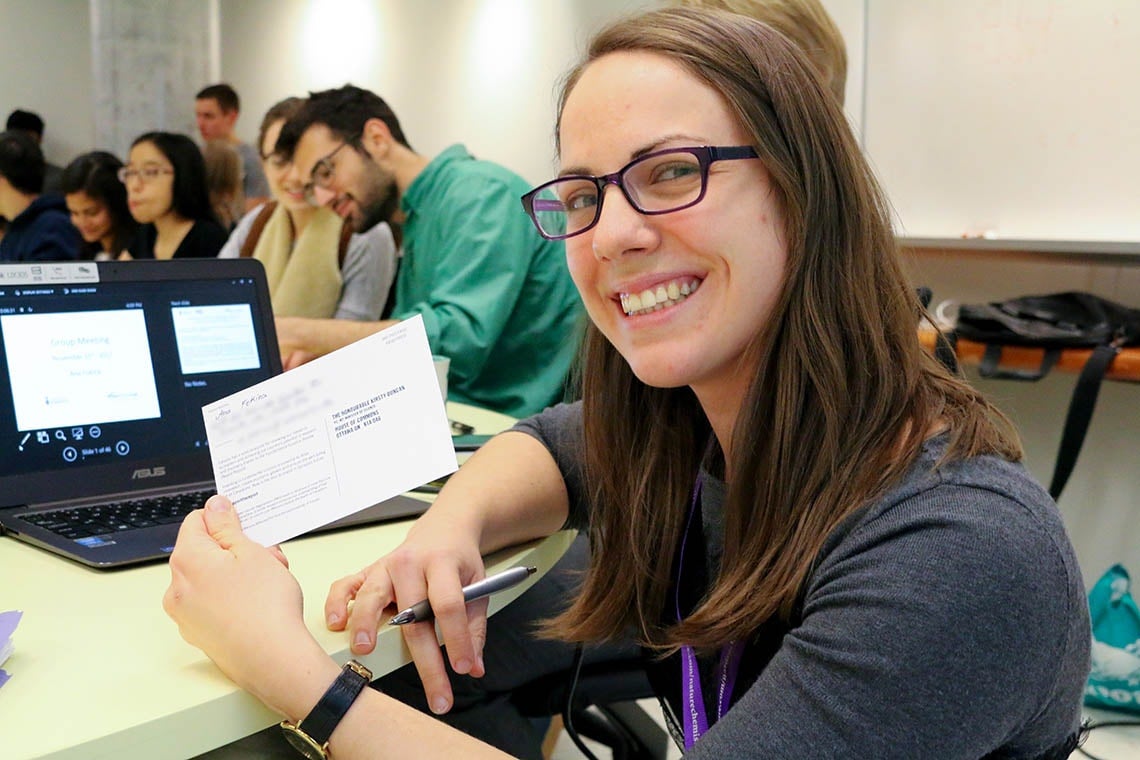 Ana Fokina, a researcher in the Shoichet Lab, is among the first to sign a U of T #SupportTheReport postcard (photo by Jennifer Robinson)

The University of Toronto is amplifying national efforts to support the recommendations of Canada’s Fundamental Science Review with a new postcard campaign launching today.

The #SupportTheReport postcards are available for students, faculty, staff and other supporters of Canadian research to sign and send to federal Science Minister Kirsty Duncan.

(See below for a list of places where the postcards can be picked up.)

The cards require no postage and should be dropped into a Canada Post mailbox by Thursday, Dec. 14.

“The postcards are just one more way for researchers and students to join the national movement in support of the recommendations made by Canada’s Fundamental Science Review panel,” said Andrew Thomson, chief of government relations at U of T.

“This is part of larger direct engagement campaign being encouraged across the country. Postcards, campus visits, letter writing and an active social media campaign are all important to demonstrate the continued importance of this issue to students, faculty, and researchers,” he said.

Among the first to sign the U of T postcards were young researchers at the Shoichet Lab, whose work to use stem cells to cure blindness is featured on one of the cards. University Professor Molly Shoichet, a Canada Research Chair in tissue engineering, and her researchers at the Shoichet Lab have issued a challenge to other U of T labs to #SupportTheReport (photo by Jennifer Robinson)

University Professor Molly Shoichet, a Canada Research Chair in tissue engineering, also issued a challenge to other labs at U of T to #SupportTheReport, and sign and send the postcards.

The postcards are part of a wave of activity that’s building across the country, from the University of British Columbia’s video social media campaign to Dalhousie University, where students are actively seeking support for the report with videos, social media and a letter-writing campaign.

In late October, organizers behind #Students4TheReport sent a letter to Ottawa with signatures from organizations representing more than 300,000 young researchers, students and postdocs across Canada, including the University of Toronto Students’ Union and its 50,000 members.

“The engagement – especially by students – has been impressive and encouraging. Hearing from those benefiting from an education at a research intensive university is an especially powerful message for MPs from all parties,” Thomson said.

It is now critical to make one final, significant push all together, he said, since federal spending priorities for the upcoming 2018 budget are largely being set before the House adjourns for the holidays on Dec. 15. Parliament won’t resume sitting until Jan. 29.

Check out the U of T social media #SupportTheReport feed

For more ways to get involved, visit the U of T #SupportTheReport advocacy campaign toolkit. The site is a one-stop shop for background on the report, activities happening at U of T, and handy ways to share your thoughts with the larger community or amplify the reach of grassroots activities.

The report by Canada’s Fundamental Science Review, issued in April by a blue ribbon panel led by U of T president emeritus David Naylor, found per capita federal investment in fundamental science has slumped in recent decades and recommended a comprehensive blueprint for making Canada a global research powerhouse.

Duncan, who commissioned the review in 2016, told researchers, academics, funders and policy-makers at the Canadian Science Policy Conference in Ottawa earlier this month: “I agree with the majority of the recommendations and I’m taking action to implement many of them.”

One of those changes, announced by the minister, involves revamping the Canada Research Chairs program to increase diversity, equity and inclusiveness, as well as the creation of a Canada Research Coordinating Committee to improve collaboration among the three federal granting councils and the Canada Foundation for Innovation.

However, the government has yet to commit to implementing all of the report’s 35 recommendations, including a $1.3-billion boost in federal research funding over four years. University Professor Molly Shoichet (left), a Canada Research Chair in tissue engineering, signs a U of T postcard along with her young researchers to #SupportTheReport (photo by Jennifer Robinson)

Fundamental research is a “long game,” explained Vivek Goel, U of T’s vice-president of research and innovation, at a panel discussion held Wedneday night to celebrate a century of innovation at the university.

Discovery-driven research “is the work that makes future innovations possible,” he said. “It opens new paths that we’re not even thinking of now. It aims to satisfy our basic human curiosity and it ignites that same curiosity in younger generations and future generations.

"This is why we must support the recommendations of Canada’s Fundamental Science Review.”

U of T #SupportTheReport postcards can be picked up at:

More locations will be added soon and can be found here.