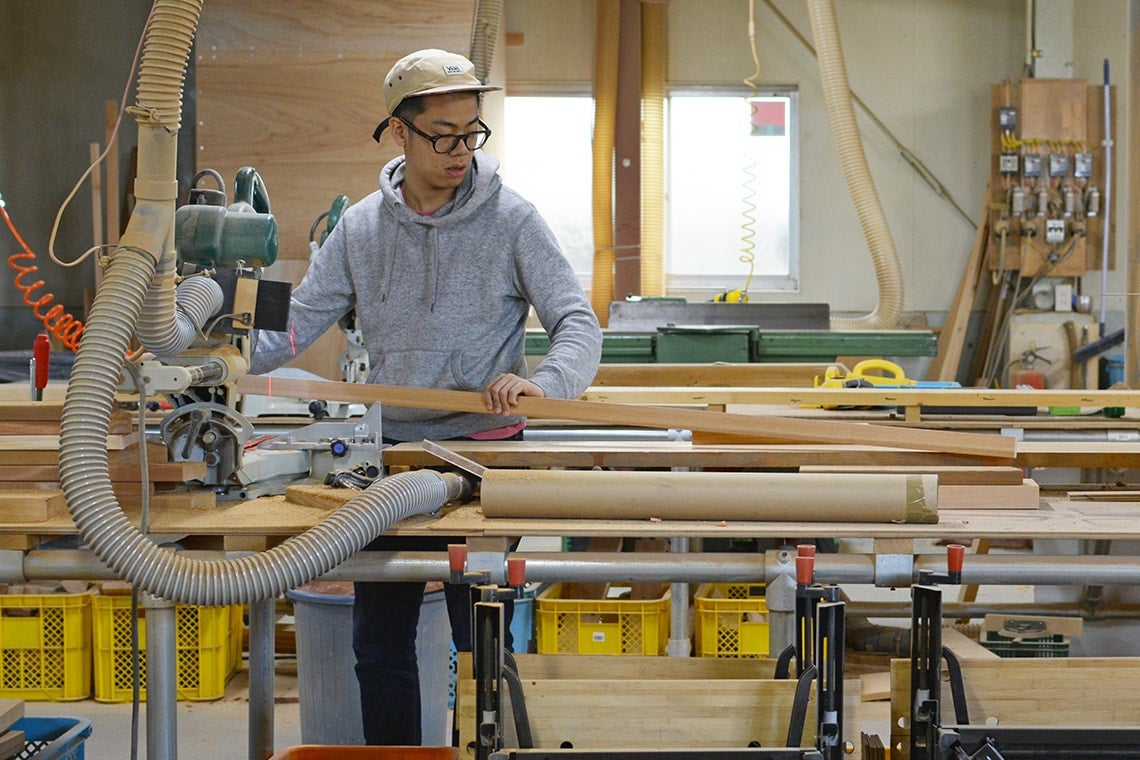 This ongoing series from Romi Levine, who covers the city beat for U of T News, shares their stories.

After an earthquake in 2011 ravaged Japan, the small city of Ishinomaki was in ruins. Over 3,000 people were dead, and more than 50,000 buildings were either damaged or destroyed.

Out of the rubble came a small furniture workshop called Ishinomaki Laboratory, founded by Tokyo-based architect Keiji Ashizawa. The lab's focus was to teach residents how to fix their houses and build their own furniture, helping to restore normality and rebuild the city.

University of Toronto alumnus David Wang learned about Ishinomaki Laboratory in 2015 during his final year of university when he was studying abroad in Tokyo.

“It's an authentic story of how a community used basic tools to slowly pick themselves up,” says Wang, who majored in Asia-Pacific studies and East Asian studies at U of T's Munk School of Global Affairs.

Wang began his forays into Asia as an undergrad with brief trips abroad. He participated in a Woodsworth Summer Abroad course taught in Shanghai, and in his third year, he went on one of the Faculty of Arts & Science's international course module (ICM) trips, travelling to China’s Yanbian Autonomous Prefecture. (See a blog about the trip.) He also travelled to Taiwan to film a documentary with fellow student and filmmaker Betty Xie (also supported by the Faculty of Arts & Science) and in 2014 he spent a year abroad at Waseda University.

He was supported by the Dr. David Chu Scholarship and the Northrop Frye Centre Undergraduate Award. The latter award subsidized research trips to the devastated Tohoku region, where Wang learned about community-based, grassroots initiatives started after the 2011 disaster for local and regional revitalization

After interning with Ishinomaki in the summer of 2015, he was hired hired full time a year later.

The company has since evolved to become a profitable furniture company that sells mostly minimalistic wooden items. As a project manager, Wang plays a big part in helping Ishinomaki expand internationally.

“The overseas expansion was a good fit for my skills. It was something I felt like I could immediately contribute to,” he says.

The company only has five full-time staff so Wang has had to become a jack-of-all-trades. Not only is Wang taking on international distribution, he’s also Ishinomaki’s marketer and translator. He’s even become adept in the workshop – learning how to build, drill, sand and pack furniture.

Wang says he has a new appreciation for hands-on work.

“Right now, at least in North America, what's really popular is tech-literacy like coding,” he says. “Woodworking, working with your hands – I see it as old-school programming using these tools. You’re making stuff through a series of logical processes, and you're shooting for a finished product to solve something. It’s design thinking.”

Ishinomaki Laboratory is still loyal to its do-it-yourself roots – it continues to hold workshops in the city and all over Asia.

This past weekend, Wang was in Singapore running a stool-building workshop for the city’s Design Week. At the end of the month, the lab is heading to the Philippines to teach residents of a gentrifying Manila neighbourhood how to build furniture.

“We're working with these people to see if what we learned in Ishinomaki and the spirit of DIY can be transmitted as a cultural exchange,” Wang says. “It’s a worldwide movement.”

Wang says he wouldn’t have pursued job opportunities in Japan were it not for his time studying abroad.

“It's good to have these kinds of experiences when you're young because you still have a malleable mindset, and it really can expand your mind to what’s possible,” he says. “It was a desire to actualize the knowledge I gained in the classroom – put some meat around it.”

The chance to learn drew Wang to Japan, but Ishinomaki Laboratory is what convinced him to stick around.