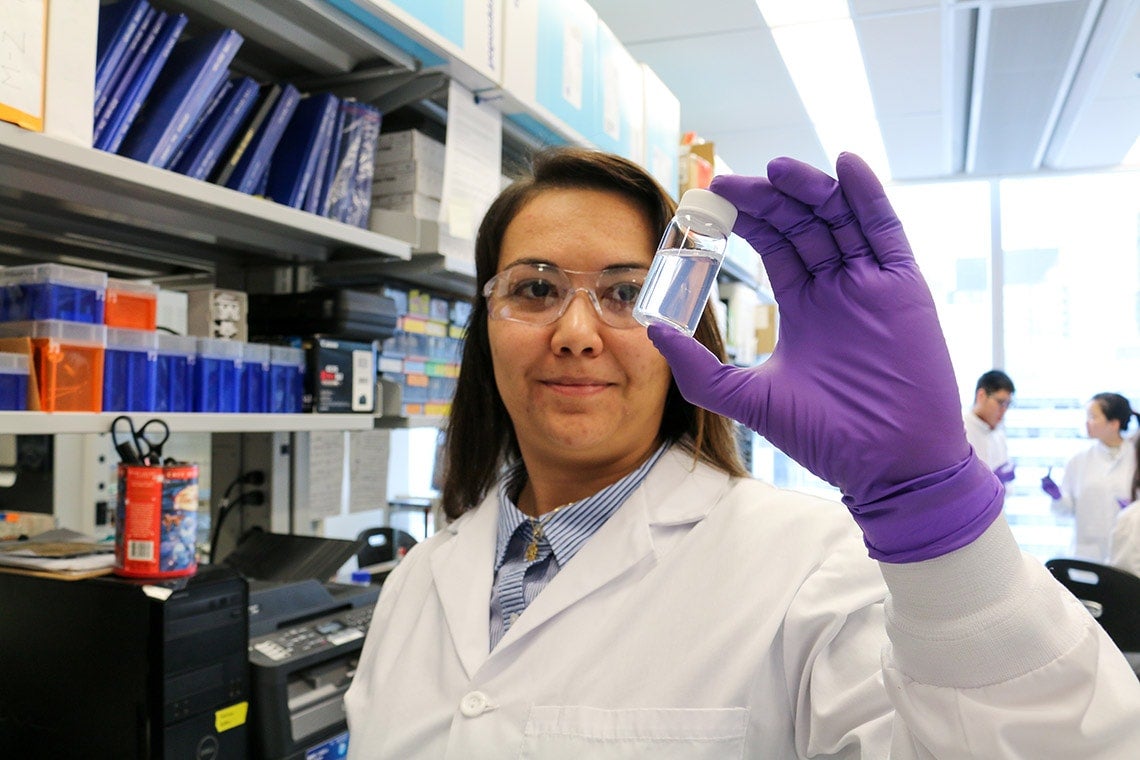 Nataly Siqueira, a U of T postdoctoral student working with Professor Craig Simmons, shows federal officials a vial of nanoparticles that will be added to a living tissue valve replacement for infants prior to implantation (photo by Jennifer Robinson)

Imagine using stem cells from a baby’s own umbilical cord to “patch” its damaged heart – one surgery that enables the implanted engineered tissue to grow with patients as they age.

“The goal is one operation and then a lifetime of normal heart function . . . it would be a normal heart,” said Craig Simmons, a Distinguished Professor of mechanobiology in the University of Toronto’s department of mechanical and industrial engineering and Institute of Biomaterials & Biomedical Engineering.

The project to repair infant congenital heart defects is among ten at U of T sharing $3.5 million in funding announced Thursday by the federal government to support research into new devices, therapies and procedures to tackle a range of health concerns. (For a full list of projects, see below.)

“U of T is grateful for the continued support for innovative research from the Government of Canada that fosters collaboration among our various faculties, departments and hospital partners to find ways to work together to find solutions that benefit the health of Canadians and those around the globe,” said Vivek Goel, vice-president of research and innovation.

The Collaborative Health Research Projects are a partnership between the Canadian Institutes of Health Research (CIHR) and the Natural Sciences and Engineering Research Council (NSERC).

The CHRP program “is a wonderful example of teamwork between the life sciences and engineering communities, and the health sciences – both areas at which Canada excels,” said Bill Blair, parliamentary secretary to the ministers of justice and health, in a statement. “I’m eager to see which new, life-changing projects come to fruition through the next round of funding through CHRP.”

In Canada, congenital heart defects occur in an estimated one in 100 births. Simmons and his team, which includes cardiac surgeon Dr. Chris Caldarone at the Hospital for Sick Children, are focusing on the most common cases arising from tetralogy of Fallot, heart defects that occur when a valve linking the heart and lungs is defective. Currently, parents have two options. Surgeons can replace this defective valve in infants with a synthetic fabric or animal tissue but these materials are not ideal. “They don’t grow with the baby,” Simmons said. “They don’t adapt or repair themselves as a [growing] baby’s heart demands change” – and they ultimately fail due to scarring and calcification.

Alternatively, parents can wait until their child is fully grown to have the defective valve replaced, knowing it too will likely have to be replaced in the future. These patients can manage into adolescence but can develop heart failure and must be monitored closely.

If successful, the living tissue valve replacement under development by Simmons and his team would put an end to the need for multiple surgeries over the lifetime of the patient and improve their quality of life dramatically, he said.

“Our goal is to produce a living tissue that functions like a heart valve that a surgeon can use to repair the [defective] valve of a baby at six months of age,” Simmons said. “That tissue would then grow and repair itself and be a normal valve.”

The plan is to create the living tissue by placing stem cells from the infant’s own umbilical cord on a polyurethane mesh. Once in the body, the mesh will eventually dissolve into harmless byproducts, leaving behind a living valve. To prevent failure of the valve, they will also inject nanoparticles loaded with an anti-scarring drug into the tissue prior to implantation.

The government funding will help the team advance the project to the animal testing stage, hopefully within two to three years, Simmons said.

“Our approach is highly translational, focused on getting tissues to patients quickly,” he said. “In speaking with surgeons, the current available materials are so poor that anything we can do to improve upon them would benefit the patient.”

In addition to the infant heart valve project, seven other U of T researchers are receiving funding for Collaborative Health Research Projects. They are: