U of T grad Emily Wright draws on experiences – and service dog – to teach students about empathy, homelessness 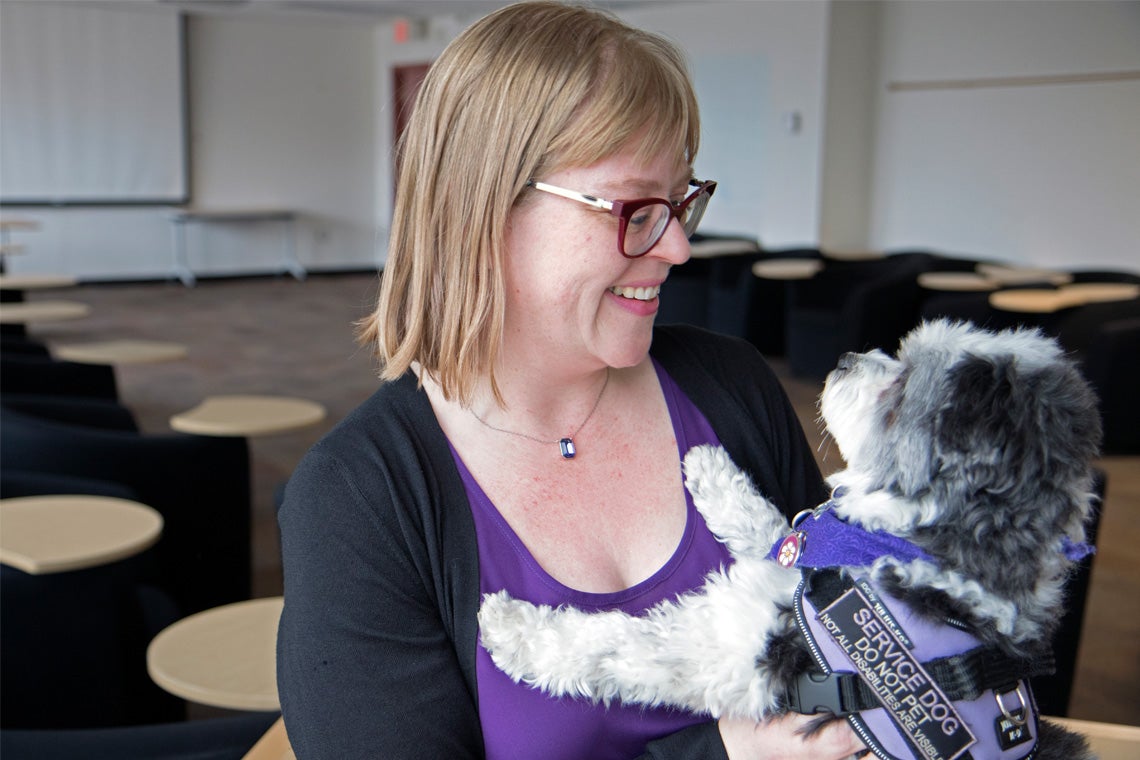 "I wouldn't have been able to do this program without having her support and having her at my side," says OISE grad Emily Wright about her dog Kailey, which will receive a special certificate from the school (photo by Romi Levine)

When Emily Wright crosses the stage at University of Toronto’s Convocation Hall on June 20, she’ll have her biggest supporter by her side – Kailey.

Covered in a mop of white and grey shaggy hair and standing about a foot off the ground, Kailey is Wright’s service dog. They’ve been together through every lecture, presentation and placement during her two years in the Ontario Institute for Studies in Education’s master’s of teaching program.

During the ceremony, Kailey will also be receiving a special honour – a certificate acknowledging her time at OISE.

“She might not have written the essays and done the actual typing and work, but I wouldn't have been able to do this program without having her support and having her at my side,” says Wright.

Wright got Kailey as a puppy six years ago. About a year later, Wright began to notice that after meals, Kailey would act strange, pawing and bothering her. Perplexed, she consulted a trainer, and then proceeded to go to a doctor.

“I got diagnosed as diabetic. And that's when I realized that my dog was actually alerting me to changes in my blood sugar,” she says.

She decided to work with trainers in order to certify Kailey as a service dog, providing diabetes and mental health support.

“She will alert me to oncoming panic attacks before they actually happen so I'm able to situate myself in a position or a place that I'm safe,” Wright says. “She does something called pressure therapy where she gives a hug on my chest to help me regulate my breathing.”

Kailey has been instrumental both in Wright’s personal life and during her training to become a teacher. Wright says bringing Kailey into classrooms is a meaningful way to teach children about empathy.

“When I start to point out things like, ‘It's too loud in the classroom' and ‘Look at Kailey, her ears are up, what do you think that means?', the kids start to pay attention to that body of language and behaviour.

“Next time it's loud, one of the students will stop and say, 'Everyone look at Kailey, let's be a little bit quiet.’” 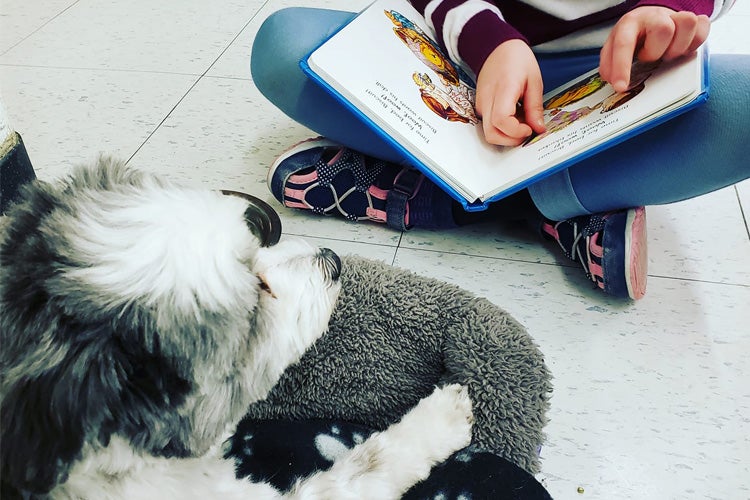 Kailey in the classroom (photo courtesy of Emily Wright)

Wright’s journey to this point has been far from linear, but the twists and turns, steps backward and forward, have shaped the way she sees the world – offering a unique perspective to her classmates, teachers and students.

“There was a time and place where I didn't know if I would be able to graduate college,” says Wright. “To think that I'm now having a master's degree with my certification to teach and did that with As and A-pluses – that feels like an amazing accomplishment and it makes me realize that I am in the right profession and not to give up on myself or my dreams.”

In 2014, Wright wrote a deeply personal account of her early life for Toronto Life. In it, she spoke about what she refers to as an “idyllic” life at home in an affluent Toronto neighbourhood. But at the private school she attended, she was the victim of vicious bullying. That led her to switch schools several times and gravitate to friends who introduced her to drugs.

When her addiction became out of control, her family enrolled her in rehabilitation programs. But following a series of relapses, and after being kicked out of a sober house, she found herself on the street.

After a violent encounter, Wright said she decided to turn her life around.

“It took being beaten and robbed for me to reach my breaking point. I never touched drugs again,” she wrote in Toronto Life.

Eva’s Phoenix, a Toronto-based facility for youth experiencing homelessness, helped her get back on her feet. Through a job placement, she found her calling: working with kids. She eventually completed high school, going on to study at George Brown College and Ryerson University before coming to U of T.

“My passion is teaching, especially about social justice issues, and I wanted to become more skilled both academically and practically in my ability to teach young children,” says Wright. “So I came to OISE to find something new about myself and hopefully be able to use that in the classroom with the students that I teach.”

“If we want to make well-rounded students and children who are going to be great adults, we need to provide them with the opportunity to be aware of these issues and form their own opinions about them.” 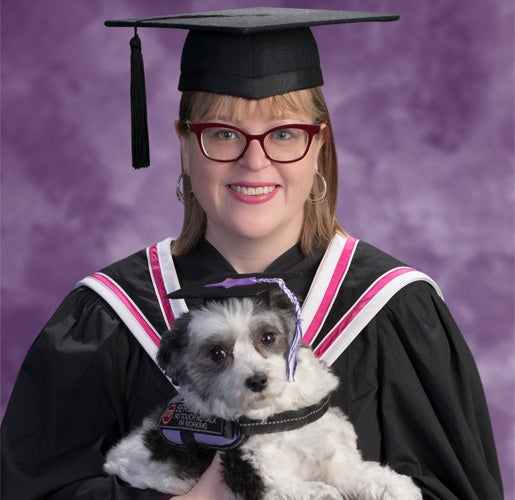 Her major research paper focused on homelessness in children’s picture books – looking at how people who experience homelessness are portrayed and the stereotypes that are being employed.

She found that people depicted as experiencing homelessness in picture books were mostly middle-aged white men who were dirty with rips in their clothing, pushing a shopping cart and carrying bags. Kids were also depicted helping homeless people primarily in the winter time.

She suggests providing students with a more nuanced view of homelessness.

“We can have a better idea of what it means to experience homelessness, whether that's living on the streets, sleeping in a shelter or the hidden homeless population, which are people who are couch surfing or staying at different friends’ places – so they get to understand that there's a broad variety of different ways of experiencing it.” 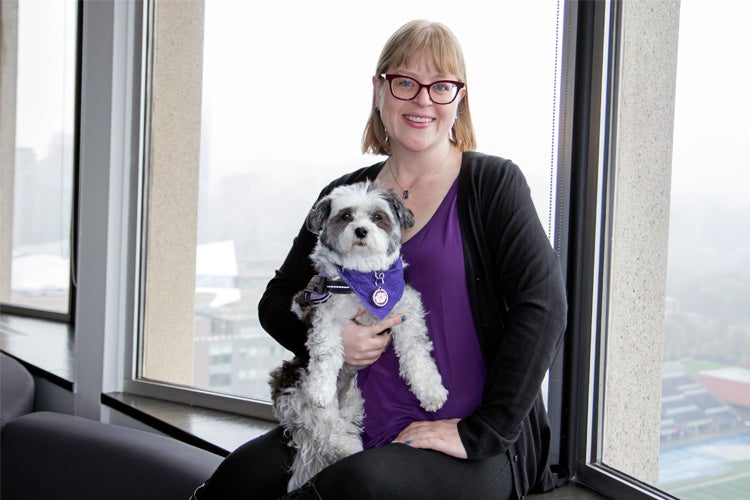 Wright says she’s thankful for the OISE faculty members who shaped her approach as an educator.

“I feel grateful to call them not only professors, but people who are part of my support team and people who care about me,” she says.

One of the faculty members who made a big impact was Shelley Murphy, a lecturer at OISE in the department of curriculum, teaching and learning.

“Shelley Murphy is an amazing professor whose focus on mental health and mindfulness has not only helped my personal practice, but has helped me in my professional practice in what mindfulness looks like and what vocabulary and words I need to provide to my students so they can experience empathy but also explain their emotions and feelings,” says Wright.

In turn, Murphy says she has learned a lot from Wright – and Kailey too.

“She's a deep and critical thinker, especially when it comes to issues of social justice and access and equity,” says Murphy. “She gave us all an opportunity to learn more about what she knows about homelessness, about mental health, about access.”

In September, Wright will begin teaching with the Toronto Catholic District School Board.

“I'm really excited to get into the classroom and start doing some supply work and make some new connections in different schools,” she says.

Beyond the classroom, Wright participates in public-speaking engagements and advocacy work around social justice issues, including mental health and homelessness. She’s worked with the Canadian Foundation for AIDS Research on curriculum development, and is currently working on curriculum with Raising the Roof, a national charity that aims to end homelessness.

“I'm adding to my repertoire of what I can do and how I speak and about those experiences,” says Wright. “I don't just have to be the person who is speaking about homelessness all the time, but I can now be the person who speaks about accessibility, inclusion and education all in one.”