U of T grad – and mother of three – Mariam Abeid knows the value of an education: 'I had to fight for it' 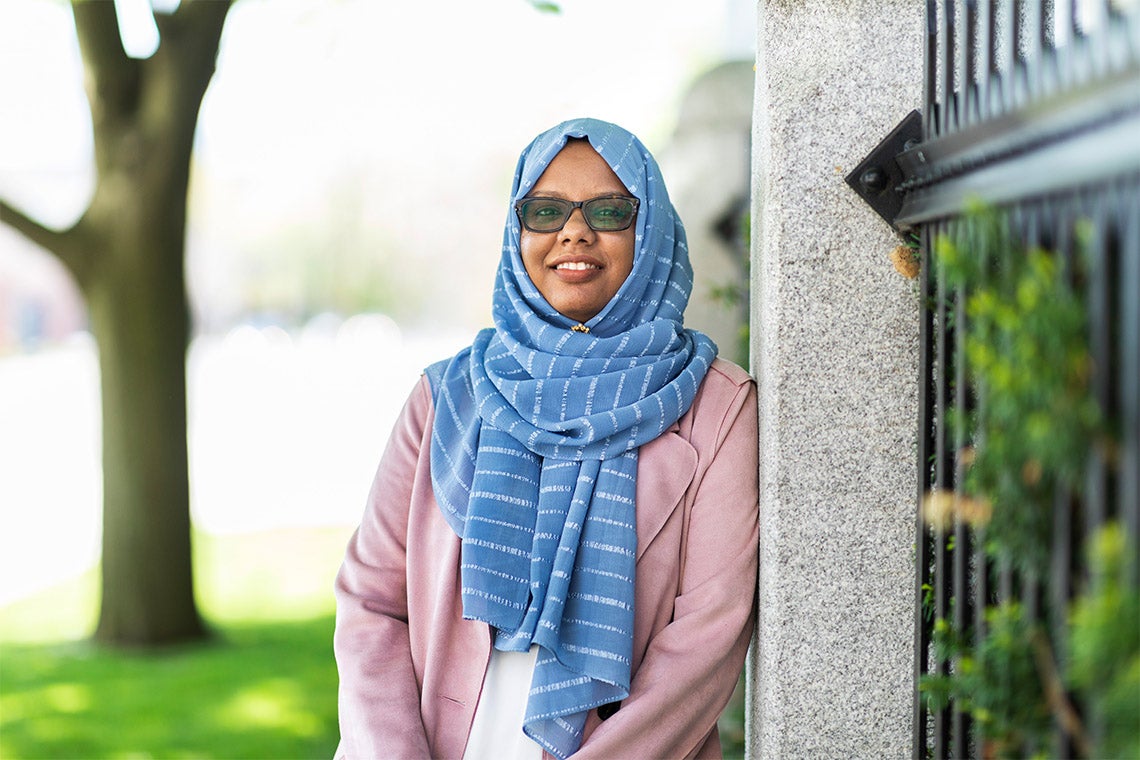 Mariam Abeid spent much of her life seeking an education only to encounter one obstacle after another. Now, the mother of three is set to become an educator herself (photo by Nick Iwanyshyn)

For Mariam Abeid, education has always been an almighty struggle.

Growing up in Kenya, she had to fight to complete her schooling in a community where girls’ education wasn’t a priority. She later married a Toronto man whose parents promised she could pursue her education in Canada – but she says they went back on their word and compelled her to become a full-time housewife.

Her husband later died, leaving Abeid – by then a mother of three –penniless and distraught. But Abeid refused to give up and is now graduating with a master’s degree in child studies and education from the University of Toronto’s Ontario Institute for Studies in Education (OISE), and is looking forward to her first teaching job.

“I thank God that I applied to OISE and got in,” Abeid says. “I got an education there and I got my life back. I have more courage, more strength and more confidence in myself now.

“I don’t know how my life would have turned out now if I didn’t go there.”

It’s been a difficult journey for Abeid, who recalls how her life was turned upside-down when her husband died in 2010. “I was beyond myself,” she says. “I kept crying. I had no idea what I would do. I just kept hugging my kids and crying.”

While still dealing with that tragedy, Abeid got word that her father in Kenya was ailing with a heart condition. She went to visit him, leaving her children behind at the insistence of her in-laws. What was supposed to be a short trip to Kenya turned into a year-and-a-half after her family refused to let her leave, and demanded she find a way to bring her kids over from Canada.

Eventually, Abeid managed to return to Canada, but says her in-laws – who were then living in an apartment that had been leased in Abeid’s name and that of her late husband – refused to return her children.

“I didn’t even know what the laws were in Canada. I was completely oblivious,” Abeid says. “I didn’t even know the country I lived in for 10 years because, after getting married, I was always at home. I had no friends and they prevented me from going out alone.” 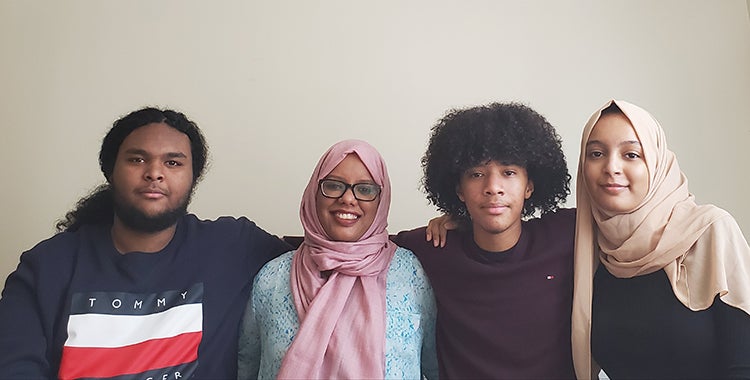 At one point, Abeid was forced to stay in a shelter in downtown Toronto. There, she met a lawyer who took up her case and, in 2012, helped her regain custody of her children and take back the apartment from her in-laws.

Abeid began to take her first steps toward a career in education at her kids’ school. She began volunteering and her talent in dealing with children was spotted by a teacher who suggested Abeid look into getting a diploma in early childhood education.

Abeid ran with the idea. She studied at Humber College before completing an undergraduate degree at the University of Guelph, where a professor recommended she pursue a master's degree at OISE.

After attending an OISE open house and learning more about OISE and U of T, Abeid says she was sold – so much so that she applied to three different master’s programs at OISE, and didn’t bother applying to any other university.

“Everyone was like, ‘You’re crazy, you should apply elsewhere, too. Why are you only applying to one university?’” Abeid says. “But I said, ‘I don’t care, I’m okay with anything I get at OISE.”

She says the strength of OISE’s master’s in child studies and education stems from the way it blends research and practice.

“We learn about how children learn, what’s behind it, child-centred approaches and so on – and it’s very research-based, which I liked a lot,” she says. “Then with the [Dr. Eric Jackman Institute of Child Study] Lab School downstairs, I got to see how the theory was integrated into practice. I was seeing it take place in the school.

“How you prep students to be able to handle what you’re teaching them and what they’re learning, how to ask questions – all of that.”

At OISE, Abeid also found a culture of caring and support.

“It’s very intimate and it’s a small group. We get to know our teachers and they get to know us,” she says. “Most of the time, I was dealing with personal problems, but I could go knock on a professor’s door and they’d drop everything to listen to me, talk to me and sometimes even give me advice. It helped me so much.”

Abeid’s time at OISE was marked by a strong work ethic and perfectionist attitude – something she traces back to her childhood in Kenya and her desperation to go to school.

“I had to get good grades to show that it’s not a waste of time for a girl to go to school,” she says. “I had to fight to keep my grades up so I could justify going to school. I couldn’t even complain about anything because then they might say ‘Okay, if you don’t like school, stay at home,” she says.

“Even now [at OISE], when I had a serious family reason to leave class or get an extension on a paper, I had a lot of trouble doing it. The professors were so understanding but I still couldn’t bear it.

“I think it stuck with me. I don’t know what do – it’s a curse and a blessing at the same time.”

Michael Martins, a Grade 3 teacher who supervised Abeid's internship in his classroom at the OISE lab school, described her as "an extraordinary individual" whose cheerful demeanour belied the personal challenges she was navigating, and whose positive attitude in the face of adversity was a source of inspiration.

"Mariam entered the Grade 3 classroom every day with a smile, ready to support children in any way possible,” says Martins. “Her ability to connect to students was observed each day as she brought a calm and understanding attitude to each interaction. She was incredibly reflective and always looked at each challenge as an opportunity to learn and improve.

“Not only have the obstacles to completing her master's degree been immense, but she did all this while supporting three children at home on her own. Mariam’s story is an inspiration to anyone, as her enduring positivity is a model of what it means to be resilient and practise a life of gratitude."

Abeid’s drive helped her secure financial support in the form of the OISE bursary program and a scholarship that supports exceptional U of T students who plan to pursue a career in primary or secondary teaching in Ontario.

She is now looking forward to starting her career as an assistant teacher at the OISE lab school, where she looks forward to teaching and improving her understanding of classroom dynamics.

Her goal is to eventually do a doctoral degree at OISE and conduct research on mental health and wellness in classrooms and schools. It’s a topic that’s close to Abeid’s heart, as she saw her daughter struggle with anxiety through her school years.

“I wasn’t happy about what I saw in my daughter’s school,” Abeid says. “When she was in elementary school, the teachers were afraid of her. One teacher told me she was scared when my child was having an episode and didn’t know what was wrong with her. In my mind, I thought, ‘You’re a teacher – if you see a child like that, you should be able to help.’ That saddened me a lot.

“As teachers, we sometimes forget that we have that kind of responsibility, and we think it’s only about taking care of what’s going on inside the classroom. We need to take a step in educating ourselves on mental health and wellness and how to help the kids.”

Abeid says her daughter – now 19 and preparing to start university – and two younger teenage sons are her biggest fans, and that she strives to convey to them and all young people to never take education for granted.

“I hope and pray that I’m an inspiration to them. If I can do this, I believe they can do much more,” Abeid says. “I tell them every day, ‘education is power.’ It levels you out with everyone else. It doesn’t matter if you’re wealthy or poor – if you have good education, you can go wherever you want and there is no limit.

“I know the value of education because I had to fight for it.”

As for what her own future will bring, Abeid is clear about one thing: Her journey of learning is only just getting started.

“I don’t want to stop. I don’t think learning ever stops, especially when you’re a teacher.”