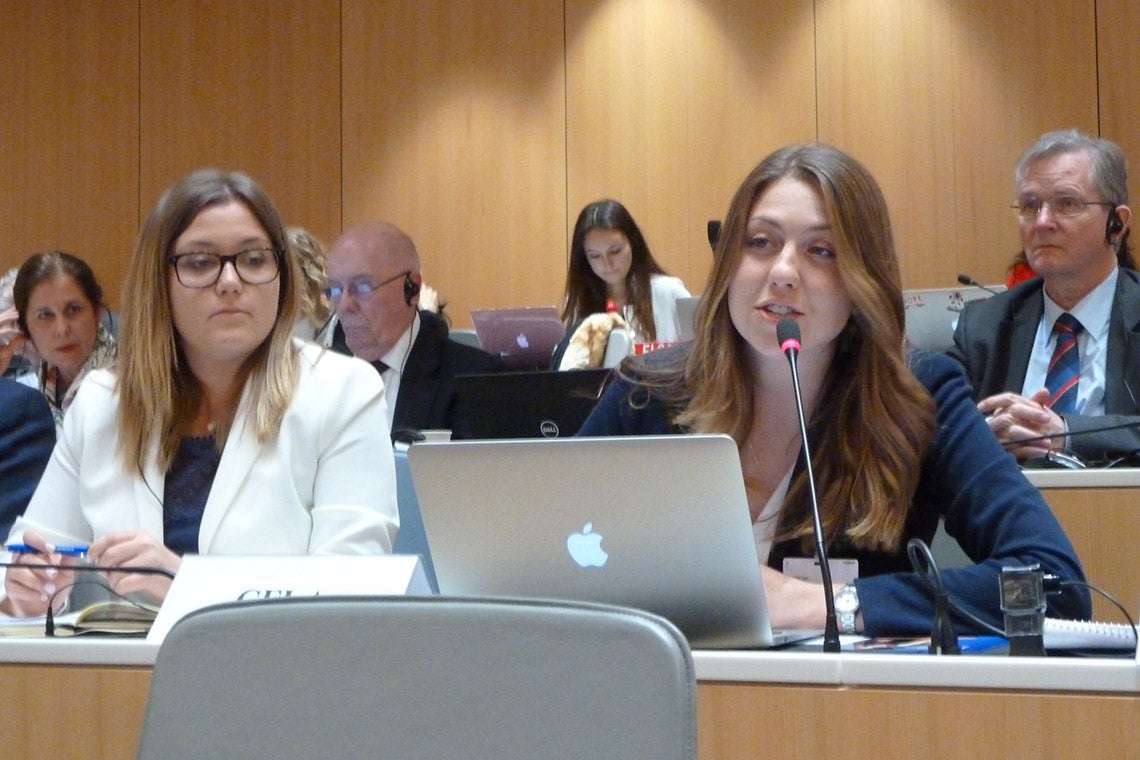 For non-experts, copyright can be a daunting concept. Questions abound: Can I use that photograph for my presentation, copy this article for my class, or stream my favourite TV show from that site? For libraries, archives and museums, or LAMs as they’re known, the situation can be even more complex.

As Joy Ramlogan sees it, the lack of clarity leads to very different outcomes. “On the one hand, people are so afraid of litigation, they err on the side of not using [copyrighted materials],” says the lawyer and Faculty of Information master’s student. “On the other hand, you also see the attitude of act first, ask later.”

Ramlogan was one of a group of 12 Faculty of Information students who travelled to Geneva, Switzerland in the spring to sit in on discussions about how LAMs should be treated under international copyright treaties. The students were attending the World Intellectual Property Organization’s (WIPO) 38th session of the standing committee on copyright and related rights, which is looking at possible limitations and exceptions for LAMs. WIPO is a specialized agency of the United Nations.

“The opportunity to go to a UN conference was unexpected and thrilling, something that my young self would have been extremely excited about,” says Ramlogan, who returned to school after decades in the workforce. She praised the three faculty members who organized the trip, which included meetings with “basically the entire secretariat and the chair of the standing committee – a much-coveted meeting.”

Many doors were opened by the Faculty of Information’s Scholar-Practitioner Victoria Owen, who is a leading national and international expert on copyright and information policy, chair of the copyright committee of the Canadian Federation of Library Associations (CFLA) and a board member of WIPO’s Accessible Book Consortium. Associate Professor Nadia Caidi played a key role in preparing students for the trip and securing some of the funding, although she could not attend herself.

Thanks to Owen, students attended the Geneva conference as affiliates of CFLA since they couldn’t register simply as students. She and the students crafted and submitted a general statement for CFLA, and master’s student Joanna Grodecki posed a question to one of WIPO’s guest presenters during the formal session.

Four students also took part in a side event on copyright for libraries and education where, according to Owen, they “witnessed the pushback my comments triggered from both international publishers and a Canadian publisher from the Canadian Copyright Alliance.”

When it comes to intellectual property and copyright, the interests of libraries and publishers can diverge dramatically, leading to heated debates. Many publishers feel that academic libraries want too many exceptions to copyright laws while many libraries argue that with so-called “fair dealing,” exceptions have long been legally sanctioned and are not being violated. All this is further complicated by the shift to digital books and journals – uncharted territory.

“The hot area is digital rights. That’s what is playing out right now and in the news,” says Ramlogan. “There’s a huge issue with academic libraries and digital publishing.” Faculty of Information students in Geneva: Twelve students travelled to sit in on discussions about how libraries, archives and museums should be treated under international copyright treaties (photo courtesy of Victoria Owen)

For example, academic libraries increasingly license the rights to use materials contained in publishers’ databases. At the same time, many publishers have raised prices steeply, causing libraries to balk and even to cancel. Earlier this year, for example, the University of California’s libraries cancelled their subscriptions to Elsevier, one of the world’s biggest academic publishers. The libraries’ previous five-year contract with Elsevier had cost some US$50 million.

Among other things, the university was concerned that Elsevier’s proposal required it to forgo what’s known as “perpetual access” to a significant number of Elsevier journals. This would mean the library would lose access to journal contents for which it had paid for a digital subscription, which would be similar to having old paper copies removed from your possession after a subscription lapsed.

Second-year Archives and Records management student Rebecca Ritchie first became interested in issues like intellectual property and copyright when she wrote an undergraduate  paper on how the estate of author Samuel Beckett refused to allow women to perform in his play, Waiting for Godot, by claiming moral rights. At the Faculty of Information, she learned about the concept of “fair dealing” – or fair use as it’s known in the U.S.

Then, after meeting Jean Dryden, a Faculty of Information lecturer and expert in the impact of law on archival practice, Ritchie signed up for Dryden’s Copyright for Information Professionals course. She has also worked at archives, where she had learned that trying to figure out who might hold a copyright on so-called “orphan works,” where the author is unknown, can divert a lot of resources.

Ritchie was thrilled to attend the Geneva conference as a student, something most archivists don’t get the opportunity to do until they are well into their careers.

“It was both career- and life-changing,” she said. “We were taken seriously by experts with more experience and credentials. It gave you a really good perspective on what’s going on.”

Ritchie learned this week that the trip may have been even more career-changing than she thought. She is one of three candidates chosen for a fellowship with the Accessible Books Consortium Secretariat, which operates as part of WIPO.

She will spend a year in Geneva assisting the consortium as it seeks to increase the number of books in accessible formats, such as braille, audio, e-text and large print.